Dead Head Fred is an original third-person action adventure for the PSP built from the ground up for Sony’s handheld unit. It’s very rare in this day and age of licensed product and sequel-itis for a publisher to take a risk, go out on a limb, and create something fresh, new, and uniquely different than most anything out there. Such is the case with Dead Head Fred. In the game, you play Fred, a hapless detective who ends up quite literally losing his head when he starts sniffing around where it doesn’t belong. Thanks to a mad scientist with a conscience, Fred is reanimated, but in place of where his head once was, he now can swap out a variety of craniums that give him a whole slate of different powers and abilities. The resulting adventure is deep, inventive, humorous, and definitely awesome. 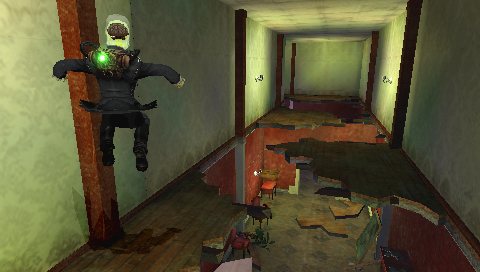 Rather than rehashing old ground, I’ll quickly touch on why this review is so much higher than the original 2 of 5. The game engine is silky smooth and, for the PSP, quite detailed and amazing. You’ll be hard-pressed to find a better-looking game on the PSP. Combat is neither easy nor shallow, and you’ll soon find that with multiple heads in your inventory, Fred can pull off a wide variety of moves. While the player is helped along the way by on-screen prompts when a certain head can be used in puzzle situations, this game is not a cakewalk nor a quick play. 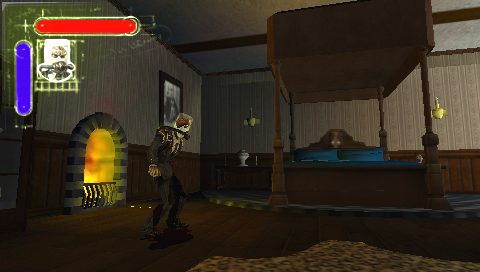 The end result is where we were most wrong. Dead Head Fred is a solid and inspiring PSP title, and one that we had been following closely since we first laid eyes on it at E3 two years ago (where we gave it “best portable game of the show”). We ask that you disregard our print review. We heartily and highly recommend this game for anyone looking for a great game for their PSP.