Given the quality of the license, Warhammer 40,000: Squad Command could’ve been a great game. Unfortunately, a surprising number of technical issues made their way into the release and for most of us, the DS title falls just short of torture.

Consider the load times. Put simply, they’re heinous. Though this is a cartridge-based game, you’ll spend three or four seconds on a load screen before the main menu even appears, ten to fifteen seconds waiting for areas to materialize when you begin or retry a given battle and then be forced on top of it all to endure shorter chunks of lag when the enemy soldiers are given a chance to move in combat. This might prompt the assumption that any on-screen action will at least look good, but it doesn’t.

Squad Command is an ugly game filled with brown and gray. You might like the colors just fine, and they certainly suit the grim nature of the license, but they’re hardly practical here. Distinguishing one on-screen element from another strains a person’s eyes. Your own units are at least colorful, but that’s it for visual flair. 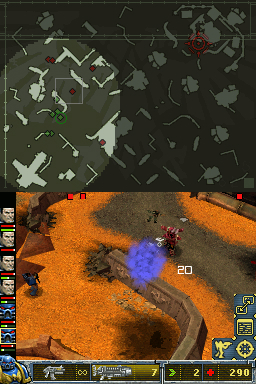 A more damning issue is the camera. Environments in Squad Command are isometric. Walls, fallen pillars and other obstacles occasionally block what you need to see in order to survive. Either you find a nice place to conceal your soldier at the end of his turn or he won’t live to see another one. This leads to a cover dynamic that would’ve been worthwhile if you could actually see potential hiding places (for both yourself and adversaries), but the lack of a camera you can rotate means that you often can’t. Instead, you have to rely on the map on the top screen. That’s just disappointing.

The incredibly slow cursor is another source of frustration. When it’s your turn, one unit or another is always active. When you’re gliding around the field trying to figure out where the enemies are and how you might approach, you’re also potentially planning a move for your current squad member. Once you’ve seen everything, you then must scroll back to somewhere closer to the soldier you plan to move before executing anything, since each step takes action points and no move can be undone.

When you actually make your move, new issues arise. Many strategy games employ a grid that lets you know precisely where you’re directing your soldiers. Here, there’s no such convenience. Arrows point out an approximate path of approach, but where you’ll wind up standing is often unclear. Sometimes, you have no idea if you’ll be safe from enemy snipers or not (assume that you won’t). Another issue is that when you decide to select another unit from your squad, if your cursor is off a bit you might accidentally tell the last soldier under your command to move again. A likely scenario is that before you know what’s happening, someone has left his shelter and is standing out in the open with no action points remaining. 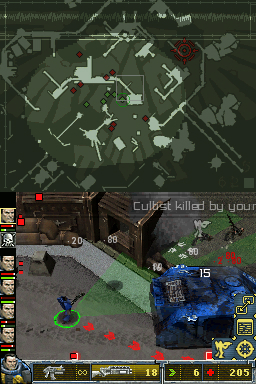 The host of technical issues mean that Warhammer 40,000: Squad Command ultimately feels like a bad joke played on anyone who expected it to provide a compelling strategy experience. Everything it does right is eventually sabotaged (even the rousing soundtrack loops so often that it becomes annoying after a few minutes of play) and the resulting product is difficult to recommend to anyone. To make matters worse, the core content that lies buried under all of the other flaws is so generic that it wouldn’t even sustain the title in the absence of the other blunders. The best strategy here is to stay clear.