I’ve kept track of this project ever since a closed-doors showing at E3 2005, where the developers’ ambitions reached far higher than their final product. Did you know there was supposed to be intelligent voice recognition in this, with the AI remembering every single way you screwed him over, and eventually paying you back in kind? Just about all of that is gone. What was planned and what was eventually shipped (twice over, if you count the significantly worse Holiday ’07 build) are two different beasts.

That being said, Army of Two is the good kind of unfinished, where instead of cutting features, the developers worked on polishing what they had. There are still plenty of new and fun ideas here, which can’t be played quite like any other military shooter to date. People used to storming it up solo like a calculated badass a la Halo will get themselves killed. Squad-based shooter players (Ghost Recon, Rainbow Six) will be a bit more at home, but since you’ve only got one guy to help you out and vice versa, there will still be an adjustment period.

The game’s underlying engine also requires a fair bit of suspension of disbelief. It all revolves around something called “Aggro,” which measures the aggression level of your players and adjusts the computer AI accordingly. If one person makes a lot of noise, the other becomes effectively invisible, to the point of becoming a translucent figure onscreen. This invisibility holds even if the person is in direct line-of-sight vision with the enemy. 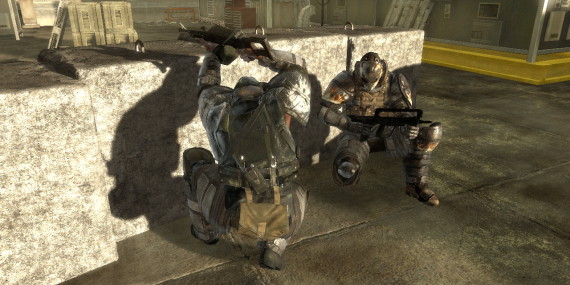 You can see where minds may boggle. If you haven’t been to an arcade in a few years, and you like your military sims “true-to-life,” then Army of Two isn’t for you. From a realism standpoint, the game system just doesn’t make any sense; from a videogame standpoint, it works well enough as a gameplay gimmick.

If you can wrap your head around aggro, though, there’s a lot of fun to be had, and tons of great moments. Some of these include: cooperative sniping, leading your buddy while shielding both of yourselves with a broken car door, two-man parachuting (one steers, the other fires), alley-oop attacks while boosting each other up ledges, one healing the other when they fall in battle, and the awesome back-to-back system, where both soldiers, in bullet time, take on an army of surrounding bad guys in a swirling view.

Few games let you experiment with so many cool situations in a single title. Weapons are also fully swappable and customizable, and the buddy-movie humor, while cheesy, actually manages to work. The graphics are easily convincing, using visual cues to let you know how well and how badly you’re doing. I’d comment on the music, but it was forever obscured by the sound of bullets flying. Take that as you will.

Of course, there are some snags to be found. While the AI is, for the most part, competent, it can easily be thick-headed at times. The rare “ability” to stop your progress dead if your partner somehow dies atop a platform you can’t get up to without a boost has been documented, and just in general, it’s sometimes better to run five or six whole screens away from a battle than trying to engage in an intense firefight while still babysitting your partner. Of course, sometimes your partner goes on a berserker rage and kills everything in sight, making things a little too easy. It’s almost like a game of Difficulty Roulette, and playing with a friend is recommended. Still, if you can’t, single-player is nowhere near broken. 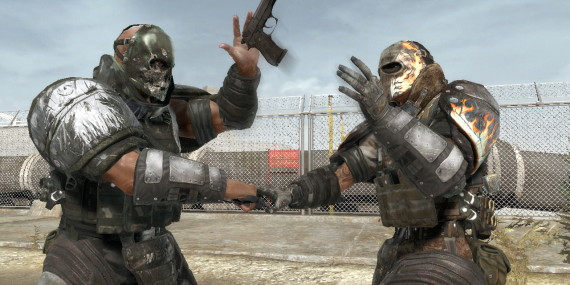 Army of Two is definitely one of those “love it or hate it” games. If you manage to “get” the game mechanics, there’s definitely quite a bit to enjoy. On the other hand, plunking down $60 to find out whether your love is true is quite risky, so we’d recommend renting it first. What we’ve got here is a game that’s deep in some places, shallow in others, and needs to be experienced just because it plays with what you’re used to. In today’s risk-averse game industry, experiments—even flawed ones such as this—deserve to be noticed.