The anthology doesn’t bring anything new to the table. Everyone you can play as is unlocked from the start, so the only real “extras” include a color edit function and a move list on the pause menu. It’s easy to switch back and forth between games, and it’s a solid port. Everything seems to be emulated perfectly, and I never saw any slowdown or other problems.

Sadly, even under the new coat of paint, it’s still World Heroes. Much like the different versions of Street Fighter 2, there’s no real differences between the titles, save for the Hero meter in World Heroes Perfect. The combo system is still lacking; there’s no handy combo meter, like you would expect in an anthology, and the characters’ special moves are still largely worthless (with some exception). Several times, I’ve actually had the enemy recover from hit stun in the middle of a combo, only to throw me out of the opening animation of my specials. Either I don’t get the system, or it’s rather flawed, and I’m really leaning towards the latter.

Still, it’s not all bad. Versus mode is highly entertaining, and there’s a wide selection of difficulties, including a few bonus modes that make the game more difficult than it has a right to be. Explain to me this: if my character is smaller than the foot of my enemy, why do I still have to duck in order to block crouching attacks? This and other riddles await you, should you dare.

Despite my misgivings, I can’t say anything bad about the collection itself. The sound is rendered perfectly, the controls respond very well, and with the exception of one playable character (he still shows up as a boss), nothing has been left out. If you liked World Heroes—or just need to complete a collection—you probably can’t live without this. If you aren’t a World Heroes fan, I won’t even bother cautioning you not to purchase it; I’ve had trouble finding copies of it anywhere, so good luck with that. 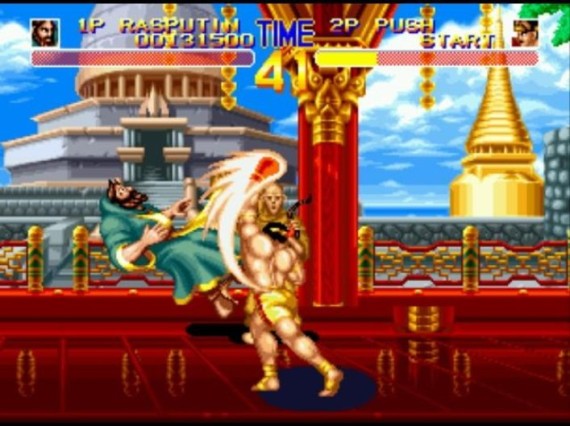 Unfortunately, the age of the collection is its greatest undoing. While World Heroes certainly isn’t the worst 2D fighter ever made, it isn’t the best, either. Aside from nostalgia, there are few reasons to dig it up. This year is set to deliver a wealth of fighting titles, all of which should have more bangs for your buck. Kick around with it in Versus mode for a while, and then quietly enshrine it in your collection of older games—where it belongs.