You know what I like? A game that’s designed for the system it’s played on, with controls that take advantage of the system’s strengths, and for it not to be a buggy, low-res shadow of its former self. If Myst had managed any of that it would be as worth playing today as when it came out fifteen years ago, but instead it’s hit the DS with all the nimble grace of a sack of dead frogs.

While the original version of Myst has just as many fans as detractors, I’ve always found it to be an excellent collection of mostly satisfying puzzles. The game is rendered in a series of first-person stills with minimal spot animation, and clicking on the path shifts the view forward to the next point of interest. There’s no question that it feels dated today, but at the time it was just how things were done. The various puzzle-filled islands were as gorgeous as they were mystifying, filled with a desolate beauty created by the empty remains of abandoned facilities. It’s unclear as to where everyone had gone, but their former homes hold the keys to the fate of the keepers of Myst. 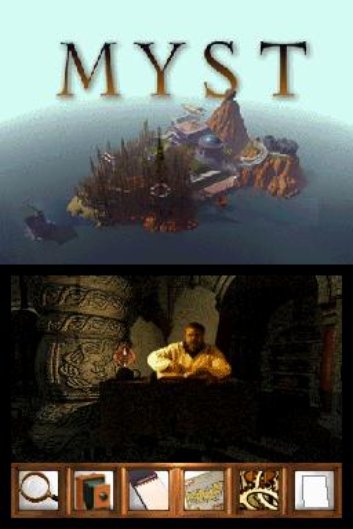 Unraveling Myst’s secrets was a great way to get lost in a wonderfully surreal world back in the days when 8-bit, 640×480 VGA graphics were impressive, and there’s no reason a bit of updating shouldn’t make it as immersive (and maddening) today. It’s really too bad, then, that the DS version is such a waste of time. The main problem is that the game just doesn’t translate well to the smaller screen. For example, one of the first tasks is to use the number of switches on the island as the password on a message device. The last switch is in a remote place, however, and looks more like a small, indistinct blob than an item you’d want to count.

Once you’ve found that last switch it’s time to activate the message, but then the resolution makes the touch screen more hindrance than help. The up and down arrows on the device are so small that trying to touch them quickly devolves into stabbing at the screen in the hope that the right number will eventually show up. It also would have helped if the contrast had been adjusted for the kinds of environments you’ll be likely to play a mobile game in, but that’s been faithfully ported as well. This makes certain important puzzle elements like the numbers on the message device very difficult to read. Myst’s visuals desperately needed revamping to be functional on the DS, and the direct port they got offers a quick path to eyestrain. 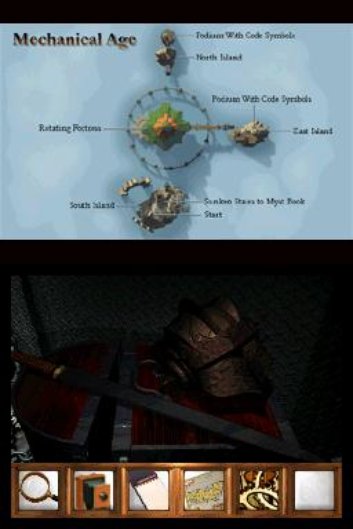 The problem with this version of Myst isn’t the game, it’s the execution. There’s very little consideration for the platform it’s been ported to, and even the small handful of DS-specific tools are liable to be useless or buggy. The magnifying glass has a tendency to render the bottom third of the screen as static, and the camera can’t even take a picture of a diagram in a book. There’s really no excuse for these issues, and Myst deserved better than this cheap, buggy port.