The good news is that We Ski’s core skiing mechanics are pretty much spot-on. You pick up speed by thrusting the Nunchuk and Wii Remote downward simultaneously, and you turn by tilting both devices to the left or to the right. It’s a simple setup, and the motions are immersive enough to be satisfying on a basic level.

You’ll quickly run into trouble when trying to master some of the more advanced techniques, however. Attaining the fastest speeds requires your player to enter a crouch, which you can only trigger by twisting the Nunchuk and Wii Remote inward. The motion is imprecise and awkward, and trying to turn while in a crouch is even more difficult, since it requires further tilting of the twisted, mangled mass you’ve made with your hands in an attempt to maintain an on-screen crouch.

Fortunately, crouching is only really necessary in We Ski’s head-to-head racing segments. Predictably enough, the most fun you’ll have with We Ski is in the events which demand the least from the game’s control setup. Slalom works out especially well; the motion-sensing controls are accurate enough to provide all the precision you need, and the mode’s greater focus on movement rather than speed ensures a fun experience free from the frustration found elsewhere in the game. 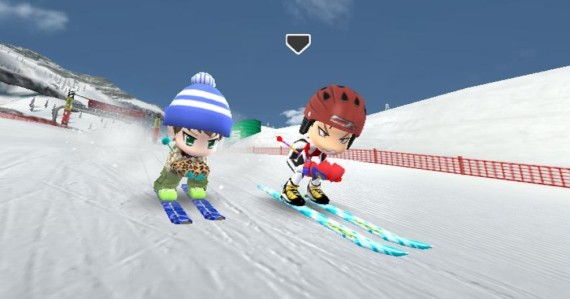 Mogul mode is the weakest of We Ski’s available events. While Slalom is fun and Race at the very least provides course variety, Mogul features only one course and wildly inconsistent gameplay as a fun bonus. Mogul mode boils down to racing over a series of bumps, hitting a jump, and performing as many tricks as you can while in mid-air. Then you get to do it again before crossing the finish line.

No step of this process works correctly. Successfully traversing the snow bumps leading up to the jump requires the player to hold down both the Z button on the Nunchuk and the B button on the Wii Remote while shaking both controller segments back and forth rapidly in unison. To attempt this is torture on the wrists, and you’ll rarely pull it off. After your skier stumbles up to the jump, you can squeeze off two or three tricks in mid-air. Oh, by the way, did you go through the tutorial in its entirety and memorize the controller motions necessary for in-air tricks? You’d damn well better have, or else you’re going to mess this part up, too.

It’s not like your performance matters, though, since your first dozen or so attempts at Mogul are going to be given a failing grade of D because your “Turning” wasn’t good enough. What this refers to, I have no idea. I went through all of the in-game tutorials and found no solution. The instruction booklet wasn’t any help, either. I even checked GameFAQs. Nothing ever told me what “Turning” meant or how it could be improved, and it was only after several frustrated tries that the game decided I had turned well enough to earn a passing score.

Elements of Mogul, Slalom, and Race can all be found in We Ski’s Freestyle mode, which at first glance appears to be a fairly deep mountain-wide quest filled with missions and challenges. In practice, it’s pretty much the same events repeated over and over again with fetch quests in between. While boredom will set in quickly, you’ll at least be able to unlock additional outfits and items by completing missions. Be aware that many of these accessories cannot be used if you’re playing as a Mii character, however. Lord knows Nintendo would never stand for anything that adds variety to its Miis in any way.

Equally disappointing is We Ski’s Balance Board support. While it’s fun to try out as a novelty, it’s hardly useful enough to warrant a giant feature bubble on the front of the box. The Board must be recalibrated between events every single time (why?), and it can’t be used in multiplayer modes at all. Inconvenience aside, though, it’s simply not as accurate as the default Remote/Nunchuk setup. Precise movements are difficult to pull off, and your skier will often veer sharply when you’re attempting to make slight turns. Maybe my sense of balance is off (I’ve only been playing Wii Fit for one day, so cut me some slack here), but I don’t think I’ll be bringing out the Balance Board for another try. 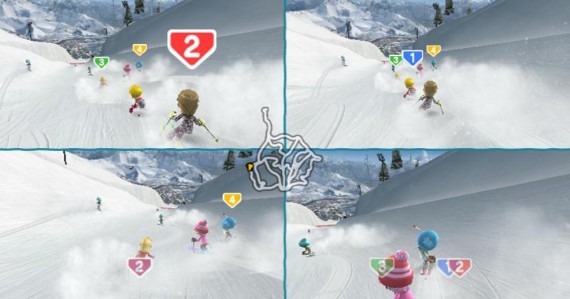 There are small bits of fun to be mined from We Ski, but few of them satisfy with long-term appeal. Much of the game is barely playable at first, and it’s only after viewing an extensive tutorial that you’ll become aware of the techniques needed in many events. Mastering these techniques is another matter entirely, and many will trigger inconsistently or only with great difficulty. The Wii Fit Balance Board is of little help, and only serves to complicate things further.

It’s a real shame, since I would’ve been much happier with an arcade-perfect port of the 13-year-old Alpine Racer instead. Come on, Namco! It’s money in the bank!