The DS is quickly becoming the big scene for puzzle games. The touch screen lends itself to a variety of applications, and its pickup-and-go style of play is ideal for casual games. Puchi Puchi Virus is just that type of game.

The story to Puchi Puchi Virus, such as it is, involves a contagious virus that turns people into monsters. These “monsters” are hilarious, cartoonish caricatures and pop-culture parodies that haven’t failed to make me laugh. You take the role of a somewhat eccentric doctor, who uses an equally wacky machine to cure this terrible virus.

The game starts out rather simply. Your goal is to cure the virus running rampant in your patients in the given amount of time. The virus is represented by little blobs on a hexagonal grid, which gnash their cute little teeth at you. There are different colors of viruses, each with a slightly different look. The more varied the colors, the more difficult your patient will be to cure. 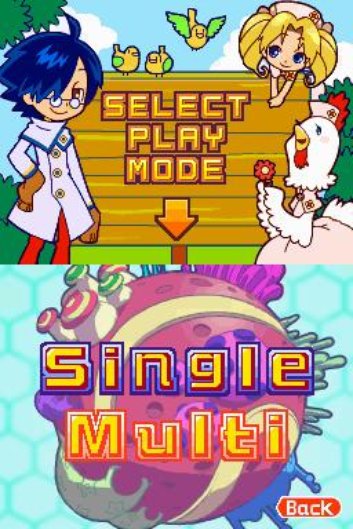 To destroy the virus, you tap three viruses of the same color, forming a triangle. This triangle will also select all the viruses inside its borders, allowing you to chain together large collections of the virus. When you think you have enough capture, you simply tap one corner to have the whole triangle burst and disappear, triggering any triangles that may be inside as well. You can chain together your triangles for more points, and getting high chains ends comprising many of the later challenges.

This system is easy to grasp in the earlier stages, and you can actually get pretty far with random clicking in the beginning. However, the puzzle is more complex than it first appears, and you’re going to have to become quick on the draw if you’re going to succeed in the later parts of the game. The challenges get difficult very quickly, and if you aren’t fast, the virus can turn to stone; if a virus blob turns to stone, you can’t interact with it until you capture it in another triangle. If you let this happen to the entire playing field, you lose the game. The tension starts to rise as the game asks you to do seemingly impossible tasks, like performing several 10-chains in only three minutes.

The puzzle action is simple enough to get into at a low level, but complex enough to keep the interest of hardened puzzle veterans. After you cure a patient, you’re treated to a witty description of his affliction, and you’re allowed to go back and review his case file at any time, which amounts to being able to replay any level you would like. 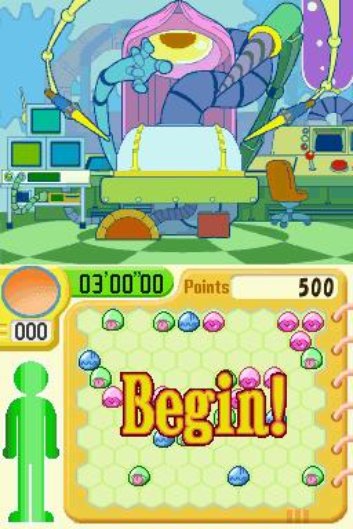 Overall, the tongue-in-cheek humor, combined with the rather engaging puzzle system and multiplayer capabilities, make this a rather infectious title. The three-minute games mean you can pick it up and put it down at any time, which is great for quick breaks or to waste a couple hours. If you like puzzles, even remotely, you won’t regret catching this virus.