Ah, Super Dodgeball Brawlers. If you’re at all familiar with Kunio-kun and his pals from previous Dodgeball titles, you’ll know almost everything you need to about this new installment. It’s the same cast of squishy rough-and-tumble high school teams, ready to beat each other senseless in the name of victory!

The game is structured somewhat similarly to actual dodgeball, but with a few noticeable differences. The playing field is divided into two squares, with a team’s movement limited to their own squares. There’s also a few members of the teams on the outside of the opposing square, to provide a little additional strategy. Players on the inside run back and forth, passing the ball and trying to knock out the opposing team.

The way it differs, however, is that this game of dodgeball isn’t played with traditional “outs.” Rather, the players keep fighting until an entire team is knocked out, which is represented by stamina bars for each individual team member. Punching, kicking, and throwing chains or grenades are also entirely within the rules. While somewhat controversial among series fans, the fist combat adds a new layer to the strategy; a good running kick can disrupt an entire offense, and allow a team to reclaim control of the match. 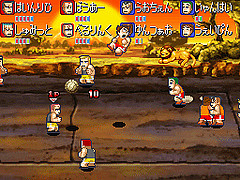 Veterans of the series should be able to mix it up a little, and the controls for it are very satisfying.

The game is limited to a few modes. In Tournament play (what amounts to the story mode), team members can gain experience and purchase items and new moves to gain an upper edge on the competition. Players can create their own team from the ground up, with the ability to make custom team members. Each team member can be designed from a multitude of parts, and the player is allowed to allocate all the ability points the character receives during creation. This fine-tuning is very welcome, and it’s easy to appreciate the ability to tailor a team to a specific style.

There’s also a mode for single matches, and a mode called Brawl, that amounts to an eight-man fistfight. In Brawl, eight different characters go head-to-head to see who is the last man standing, and over wireless play, that means eight different players can join the game, even if there’s only one cartridge between them all. That’s a lot of melee for your buck!

However, one thing helps to hold this title back. Occasionally, the controls can be rather frustrating. While the super shots require some timing to execute properly, and catching a dodgeball requires similar reflexes, sometimes the characters seem unable to pick up a ball that’s right in front of them. This becomes tiresome rather quickly, but doesn’t crop up often enough to be a total deal-breaker. 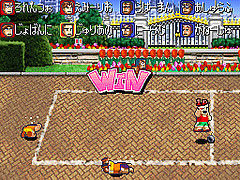 Overall, it’s not the most sophisticated title on the block, but it’s worth it for the nostalgia value alone. Add to the fact that you can engage seven other people in a pick-up match on one cartridge, and it quickly becomes a very useful title for long lines at conventions or game releases or other boring places. Consider adding it to your repertoire of time-killing games, and you probably won’t be disappointed.