The Metal Gear franchise has always pushed the boundaries in creating an immersive and unique experience. Whether it is the birth of the stealth-action genre, or the psychological mind games, Metal Gear titles have always been an experience like no other. Metal Gear Solid 4: Gun of the Patriots continues that trend as it wraps up the entire Solid Snake saga with a bang.

Having waited years for the fourth installment to finally hit the Playstation 3, it’s relieving to know that the game lives up to its hype. This isn’t your typical Metal Gear Solid game. While previous titles share similar aspects, the new gameplay mechanics allow a variety of ways to play through the game. This is for the best as something like the Octocamo becomes helpful when you’re trying to sneak by enemies, and Drebin’s shop feature allows you to customize and purchase weapons, helping you dispose of your enemies quicker. You can go through the game guns-blazing, or you can take your time and go the stealthy route; anyway you play will be accepted by the game. 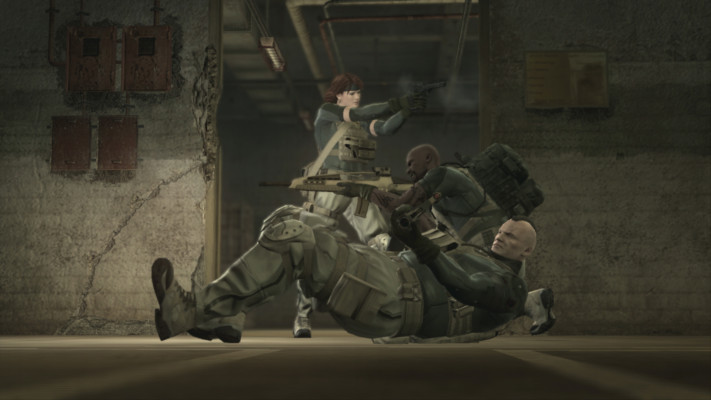 While you will find yourself moving from one location to another, the world is surprisingly open. I played through the game a couple times and was still finding areas that I never even noticed before, or areas that branched off into different routes. It’s this quality that makes the game very flexible, allowing Snake to choose where to go and who to help. Helping specific groups or even animals also plays a small role in that, if you help one side, they won’t see you as an enemy and on occasion, you are able to trade equipment. The boss battles are creative, and they require a lot original strategies unlike anything you’ve seen in a game before.

The Metal Gear Solid games have always been well known for their deep storylines, and the latest installment is no slouch. Having left off with so many unanswered questions at the end of Metal Gear Solid 2, everything is nicely tied up, even if most of the story is still hard to grasp. The major difference in comparison to previous installments is that the fourth game has a lot more character development. While the main plotline still revolves around the world in chaos and Snake’s rather complex situation, almost every character is given a significant role and do more than just sit back and guide Snake along his journey. This comes off as a treat because Snake is a pretty vague individual for a main character, so it really does feel like the world around him is alive and evolving.

With the video game community now demanding some sort of online feature for every game, it’s only natural a AAA title such as Metal Gear Solid 4 would find its way online. After playing this, it’s apparent that the majority of the focus went strictly into the single-player experience, as Metal Gear Online is far from complete. The online portion, while still taking the form of a stealth-action game, revolves around modern/futuristic warfare, so it’s heavily action packed and consists of up to 16 players per match, six different modes, and five different maps. It’s relatively entertaining, offering expanded enjoyment and extensive use of the new gameplay mechanics. 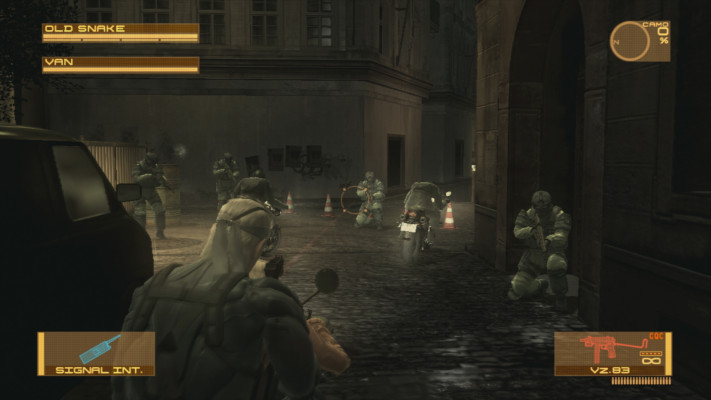 One of the only disappointments I have with the game is the unbalanced gameplay. Don’t get me wrong, the overall gameplay mechanics are brilliant, but the way it’s set up is inconsistent throughout. What I mean by this is, instead of having an always developing and steady experience; the game breaks up into three specific gameplay sections. Out of the five acts, the first and second acts feel focused on action, where the third and fourth acts concentrate on pure stealth, and the final act mainly revolves around the story. This isn’t a significant backlash, but it does slow things down and limits your abilities through certain points in the game.

The overall presentation is just breathtaking. Visually speaking, this is the best looking video game ever released. There are times when I find myself in awe at the amount of detail that goes into each model; even the most insignificant things far in the background contain more than what you would expect. Alongside the pretty visuals is fluent animation that creates a compelling and immersive atmosphere. There are times when I truly believed I was watching a motion picture – especially in act 3 – as everything is so well directed, it might as well been straight from a movie. On par with the visuals is the sound quality. The soundtrack is as magnificent as previous games, offering well placed scores and atmospheric tones; voice tracks carry characters to a whole other level; and sound effects blend in perfectly to the damaged and gun-filled world. The visual and audio presentation is well above average and will have anyone immersed within the beauty of the story and gameplay. 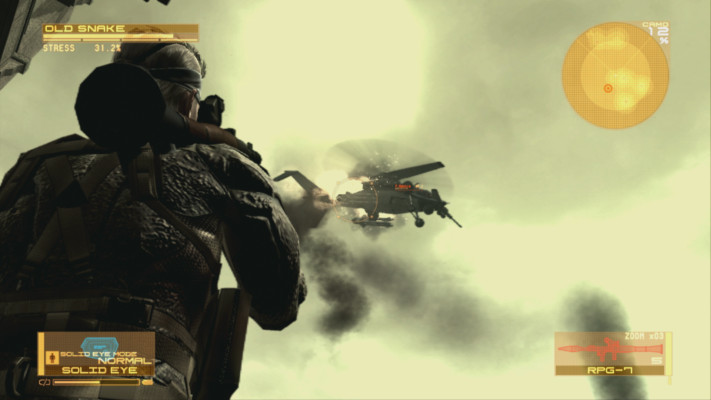 Metal Gear Solid 4 is by far one of the best games released this year. This is exactly what the Playstation 3 needed: an exclusive third-party title that truly displays what the system is capable of. The only thing that might turn some gamers off is the extremely long cutscenes that are followed by a couple minutes of gameplay before entering another cinematic. It’s one of those outrageous and confusing stories that you will have to replay before you get a full grasp of. With almost unlimited possibilities every playthrough, and quite possibly the most cinematic experience you will ever have, Metal Gear Solid 4 is without doubt the perfect conclusion to a fantastic saga. Snake, it has been a long and exciting ride. You definitely deserve a long and peaceful rest.