Naruto has become fairly popular stateside, and with the anime’s success comes a wealth of ninja brawlers. I haven’t yet decided if this is purely to cater to fan interest, but many of the titles have been able to stand up on their own, without too much help from the Naruto name. Naruto Ultimate Ninja Heroes 2, however, seems to be a little less concerned with making a good fighter, and instead chooses to capitalize on fan service.

Now, this isn’t necessarily bad — in fact, The Phantom Fortress is a fantastic example of what anime/game tie-ins should be; while understanding facts from the show rewards players, insufficient knowledge doesn’t hinder play. Story and gameplay hold their own, and prior knowledge only enriches the experience.

The Phantom Fortress requires little, if any, exposition. The characters present themselves rather well, and a lack of background actually deepens the mysterious atmosphere surround the game’s story. Naruto’s hometown has come under attack by an unknown enemy, who has summoned a hovering castle that is controlled by a malevolent presence, bent on destroying everything. In the Mugenjo mode — named after aforementioned castle — the player guides Naruto and his allies through the dungeon-like castle, avoiding the traps and dangers that hinder their progress. Along the way, more allies join up, and the player is allowed to refresh his roster of characters after several floors. Players battle their way through each floor, and the combat consists of standard arcade-style fighting; anyone who has played any of the other Naruto fighting games should feel right at home. 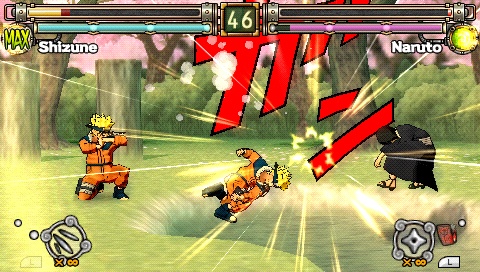 The floors are divided up into rooms, many of which are empty spaces. The player is allowed to fill in the blanks with a rotating inventory of rooms, which offer several different mini-games and a standard battle stage. The mini-games are relatively simplistic, but as the player progresses through the floors, they slowly ramp up in difficulty. The whole thing is balanced rather well, which staves off a potentially frustrating difficulty curve.

A few of the mini-games are action-oriented, requiring the player to climb trees, mimic a shadow’s movement, play a ninja-clone version of the shell game, etc. However, the quiz mini-game requires the player to draw on knowledge of the anime series. This isn’t too punishing at first and there’s no penalty for failure. Astute players can gain some extra points, however, which are used to unlock various rewards.

Aside from the Mugenjo, there’s also a Heroes mode, where the player picks a team of ninjas with the intent of clearing an increasingly difficult set of stages. The game works like something of a survival mode, with the added bonus of being able to use a set of skills before the start of each match. Some skills are very damaging to the opponent, but their limited use requires a bit of strategy. Players are allowed to pick any combination of ninjas they desire, but picking specific combinations of characters unlocks special teams. These special teams have unique team skills, as well as a unique team name; generally, these teams are based around certain relationships in the anime — for instance, characters from the same team in the Chunin Exams will always form a team of three. This is another instance where knowledge of the anime is very rewarding, but a little guesswork would accomplish the same result.

There’s also standard one-on-one versus the computer opponent, a training mode, and wireless multiplayer. These are mostly self-explanatory, though the multiplayer mode allows players to compete with only one UMD, either in single ninja battles, or team combat.

There are extremely short loading screens before each fight, but these are hardly worth mentioning; the loading times are about as long as character introductions in any versus fighter, and the loading screens themselves are pleasant enough to watch — generally, they either show full-character portraits of the ninjas about to enter battle, or slightly humorous wait animation. 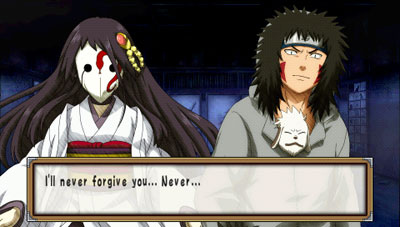 Overall, The Phantom Fortress is a surprisingly captivating portable game that does well to live up to its popular name. Those who aren’t fans of the series might have some trouble starting, but the game doesn’t go out of its way to punish unfamiliarity. Fans should find the entire experience entertaining, and it’s hard to find fault with the core mechanics. It’s a solid buy, and the single-UMD multiplayer only sweetens the deal.