Is it 1995? Oh…it’s not? So why is there a video game that was just released based on pogs? See, I could have sworn that pogs were a 90s fad that died in the same Rubbermaid coffin under my bed as my Yo-yo collection. Apparently, developer Pronto Games feels like 2008 is the right time to capitalize on the cardboard disc craze that is just oh so hip with the kids.

SPOGS Racing is a racing game about pogs. Go ahead and take a second to let that sink in. Ready to go on? Alright, good. The pogs are just floating in the middle of a tire. There are no racecars or karts, just tires. Tires with pogs floating in them, complete with a muffler sticking out of the tire. Moving past the whole physically impossible thing, we are presented with a high speed racing game. To race, you literally just hold down the 2 button and turn every so often. 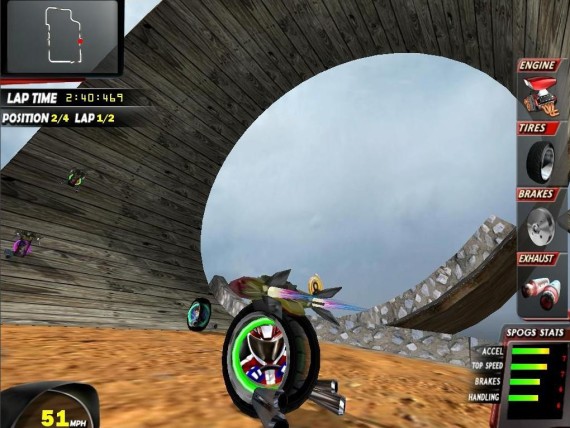 There really aren’t any real driving mechanics here. The game’s tracks include stunning environments such as a dirt road with the same exact palm tree to your left or right every 4 seconds.

But let’s not forget the stunning NASCAR style track, which is complete with little pog people in the audience and odd lines in the road that are either glitches or a sad attempt at detail.

It’s a pretty good diversion that makes the game feel meatier, but the bulk of the game is in the 1 Player Hard and Easy modes.

The graphics of SPOGS Racing are simply insulting. This looks like a game that would have been released in 1996. Hell, maybe it should have! At least then it would have been relevant. The music is god awful midi-sounding tunes that are sure to make you leave the game feeling like you’ve just been punched in the head a few times. The sound effects are just as awful. If you’ve ever mistakenly stepped on a cat, the sound the poor feline makes is very reminiscent of the engine sound that never stops blaring in SPOGS Racing.

Nothing about this game is good. It’s one of the most horrible games ever made. If this was a free Mini-Clip game, I’d heavily advise against playing it. But the fact that this shovelware piece of crap costs $10 is simply disgusting.