I really like Soulcalibur IV. It still feels strange for me to say this, because up until I played it at E3, I was sure I’d hate it. The “hype” centered around it certainly wasn’t pretty for me: giant chests (no!), Star Wars characters (why?), seemingly random (not unwelcome, really, just random) contributions from Japanese guest artists and designers, and the director of the game inexplicably feeling proud of himself for “managing” to create a fully clothed female character (who you can strip to her skivvies using the character creator if you wish, but it’s far too early in this review for biting irony).

To find any news on the game’s actual feature set and engine, you had to dig a mite deeper, and even then, there was no way to fully know what to expect, since, like Soulcalibur 3, this game is debuting on consoles rather than arcades. Thus, no test locations, no playability info, no high-level character analysis. Fortunately, in terms of playability, Soulcalibur IV is one of this year’s pleasant surprises. It’s a shame it’s not really finished (we’ll get to that later), but what’s here still impresses.

Right off the bat, the fighting feels much improved from the previous games. Soulcalibur 2’s skittishness and ability to ring-out someone simply by breathing on them is gone. Many move motions have been reset to their SC1 and SC2 versions, nullifying the jumble-thon that was Soulcalibur 3, and allowing people who’ve learned legacy games in the series to shine once again. The two main additions to the game engine are the ability to destroy pieces of clothing and armor (with wonderful fanservice-laden results), rendering them more vulnerable a la Sega’s Fighting Vipers, and the Critical Finish, which stops massive turtlers cold. Once a fighter’s guard bar is broken via excessive blocking, it’s easy to lose the entire match outright if the player on the offensive is quick enough. This is very helpful since throwing is now not the only way to deal with turtlers, and the threat of being insta-killed forces chronic blockers to further utilize the game’s 8-Way-Run and Guard Impact mechanics. However, somewhat controversial is the fact that the game now moves at a slightly slower fighting pace, presumably to ward off lag in online bouts.

In addition to these overall engine changes, many characters have been enhanced or rebalanced from previous years, making some more versatile, some more badass and just plain more fun to use, and some less nerve-wracking to fight against. My personal mainstay, Seung Mina, plays a lot like her Soul Calibur 1 counterpart, with a few extra power and combination moves added to make her more versatile and less of a Kilik clone. Xianghua is still unpredictable and juggle-happy, and does more damage than she used to—in exchange, she’s been given more recovery time on her moves (using the stun generated off her spin-kick to get an easy grab on an opponent just isn’t a viable tactic anymore thanks to added recovery time), and her old juggle tactics are tougher to pull off. I’ve been hearing reports of people like Ivy and Raphael being toned down from previous installments. Such reports are anecdotal, mind you, but rest assured there are already experts on the case in the form of FAQ authors and tournament-level players. However, last I checked, everyone still hates newbie-friendly Kilik, and the mere act of picking him is a good way to get negative feedback on Xbox Live in no time flat.

As far as the extra characters are concerned: the guest-designed newcomers are nice and pretty and all, but they’re clones of existing characters in terms of movesets—which means, outside of Angol Fear, who actually looks like an ink-and-paint character plopped into the world of Soulcalibur (and in a good way), they have little to offer for choosing them. The Star Wars characters, on the other hand, fare far better. Yoda is a jumping, leaping and twisting freak, just like you saw him in the prequel movies. Darth Vader… is Darth Vader. Little more needs to be said. He’s a lumbering tank with cool lightsaber swings and force telekinesis. Starkiller (The Apprentice), however, is the biggest surprise. He goes out of his way to be objectively awesome, from his demeanor and his Force Lightning, to his juggle combos straight out of Tekken and Marvel vs. Capcom. It’s all just enough to make up for his crushingly bland character design.

Moving onward! We may as well get this out of the way now: this game is utterly gorgeous. Animation is fluid, and the hit-sparks are prettier than ever. In terms of the 3D fighting game genre, the only game that competes with its graphics engine is Street Fighter 4—a game that’s not even out yet here in the States. It does, however, suffer from clipping issues at times. Odds are you’ll really only notice them when trying to manipulate the camera during create-a-character sessions, but they’re there nonetheless. Its soundtrack is nothing to scoff at either—several tunes recall the majesty of the original, even if the original’s OST is still the best. The voice acting is pretty good in Japanese, but a mixed bag in English, however, it’s the only way you’ll get the Star Wars characters to actually sound cool. Simply put, in terms of aesthetics, this game wins all over the place.

The last big draw of Soulcalibur IV is the character customization, and while it’s a downgrade from SC3 in terms of equippable items and usable fighting styles, it’s still amazingly robust, and will prove for many to be the most fun part of the game. Best of all, in addition to being able to create original characters (or more likely, pieces of copyright infringement!), you now have full control over character costume modification. Want your main in your favorite color? Ever thought Mitsurugi would’ve looked better in a business suit, or Xianghua in a schoolgirl uniform? Now’s your chance! Take it, and abuse it for all it’s worth! Games are, after all, for personal enjoyment! The customization mode extends the life of the game greatly—let’s hope Namco’s smart enough to keep DLC going for it for a long time.

The biggest complaint one can level against this game, then, is the fact that it’s more or less unfinished, and bare-bones—often in ways that are baffling. For example, whose bright idea was it to fashion an awesome tag-team mode, and then make it a single-player exclusive? Where are the options to fully tweak a versus match, such as energy bar length adjustment? Why are there no interesting extra modes besides character customization (sorry, Tower of Lost Souls is a boring grind-fest)? Why are Arcade Mode and Story Mode still separate entities, when Arcade Mode has nothing to show for it (you can’t, for example, fight AIs based on Japanese arcade players, simply because this is currently a console exclusive)? Why the removal of features from the create-a-character mode?

The list goes on, though eventually it devolves from confusing omissions into random nitpicks that will be different for each person, and be bigger issues to some more than others. However sparse they may sound on paper, however, they all add up, and cost the game points by giving it an aura of incompleteness. Indeed, the core game is here, and highly competent, but the lack of overall features is disappointing, considering that this is the company that pioneered the adding of frills, extras, customization options and timesinks in fighting games, dating all the way back to Tekken 3 on the PSX. At least the unlock process for most items and characters is the easiest it’s ever been. 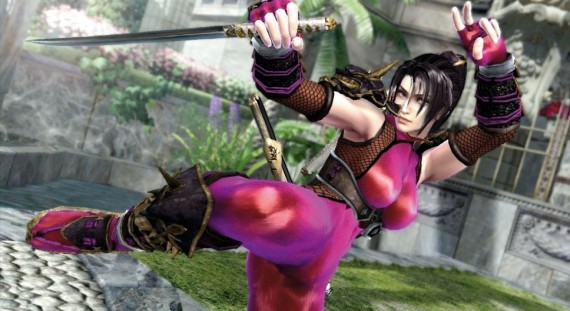 Still, even with what’s missing, this title is quality. I’m not going to even pretend that I know anything about “balance” anymore; my tournament-level fighting-game-playing days are long since past. However, not only is Soulcalibur 4 a fun game, but it so far has not presented any situations during matches that are impossible for people to get out of (barring network lag). If only they’d added the frills that they’d had for the previous installments, we’d have a true winner here. As it stands, I personally rank this a good bit below the Dreamcast original in terms of quality, but above all other installments.