Warhammer: Mark of Chaos came out in 2006 and delivered a solid RTS experience to the Warhammer faithful. Battle March expands upon that to add new playable races to the game. The expansion includes all of the original content with no alterations. While still capable of delivering a strong RTS experience to newcomers, Battle March doesn’t really have enough new content for people who already own the original title.

For those newcomers, though, Battle March is a lot of fun. Unlike a traditional RTS, you start each mission with a set number of units, with each unit composed of a number of actual soldiers. These units gain experience from battle to battle, making careful management of them key unless you want to retrain a newbie squad for your next battle. Gold is accumulated both from winning battles and from random drops from enemy squads and buildings, which can be spent between battles to upgrade your units with better equipment, blessings, and siege items.

With a finite number of units to deploy and no resource management to worry about mid-mission, Battle March emphasizes strategy and tactics more than winning by sheer numbers. Placing your ranged units on the high ground and letting the enemy rush you before sending your melee in to charge against them is a smarter move than just rushing the enemy with all of your units at once. Units all have strengths and weaknesses when fighting against other units, and knowing when to pull back is often just as important as when to push forward when one of your units is about to face down a threat they are ill-equipped to deal with.

Hero units spice things up, as they can either fight alone or can be embedded with a unit to give that unit some bonuses. They almost always have certain abilities that assist the unit they are attached to, such as morale or armor boosts, but can also use their offensive abilities just as freely as if they were on their own. Hero units are far from invincible, however, and though they are powerful they are not units you can just send in alone and expect to not die off quickly.

All units have both morale and stamina to keep track of, which grow and shrink depending on the battle situations. Stamina is used to make units run instead of walk, making them move more quickly but also making them more vulnerable against melee attack. Morale measures a unit’s will to fight, which shrinks as the unit takes losses or is getting pounded by siege weapons. If morale is drained completely, the unit will flee in a panic to a safer location, which can also lower the morale of any unit that sees them doing so.

The three single player campaigns that chronicle the armies of the Empire, Greenskins, and Chaos are all enjoyable but play out in largely the same manner. The player starts out with a mere handful of units and a couple heroes, and as they progress they purchase upgrades for their units and any more that the find, as well as purchasing new units to round out their ranks. The persistent unit experience and equipment gives combat a more personal feel; you simply don’t want to see your units die after they’ve been your faithful warriors for so long.

The expansion content adds some new armies to the fray, namely in the form of the Skaven, High Elves, and Dark Elves. However, these armies are only usable in multiplayer or skirmishes and have no campaign content of their own. This is disappointing, as the Elven campaigns especially could be suitably epic, and even more disappointing for owners of the original title who aren’t keen on the idea of spending forty bucks for a handful of new multiplayer content. 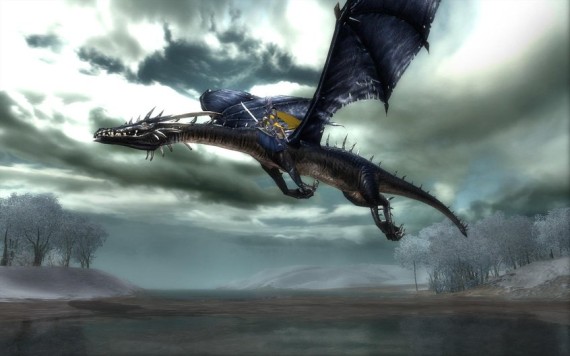 For those that haven’t had the chance to check out the original title, though, Battle March is a well-rounded RTS set in the Warhammer universe. The expansion content does flesh out the multiplayer more fully, despite it not doing the same for the campaign mode. The engine may be aging and looking a bit ragged around the edges, but the game’s heavy emphasis on strategy and the persistent units in the campaign make for hours of scaling castle walls and slaying your foes.