Even the most cold-hearted of gamers can seem cuddly after playing Rhapsody, given its bright colors, songs of happiness, and fairy-tale setting. It was a musical strategy RPG by Nippon Ichi Software that pretty much stayed under the radar, long forgotten by all but the serious collector. With an updated battle system and extra chapters, Rhapsody’s remake for the Nintendo DS provides a nostalgic retreat for old fans and a new, corny, and dare I say musical adventure for all RPG fans.

Rhapsody’s look is all about charming 2D sprites and backgrounds. Its art design is composed mostly of soft pastel colors, so everything is bright and cheery in the kingdom of Marl. This isn’t a game that pushes the DS hardware. Cutscenes are composed of character portrait cut-ins and dialogue boxes while battles are randomly generated as players walk around field maps. The top screen is used as a map outside of battles, while all controls and movement are done on the bottom touch screen. The interface is simple and easy to get used to; there’s absolutely nothing confusing here. It also feels rather bare at some points.

The story revolves around Cornet, a young, orphaned puppeteer who just wants to find true love. With the help of her many puppet friends and her lovely vocal chords, she travels through the kingdom in search of her elusive prince charming. This game is chock full of sappy and sweet songs that detail the adventures of our young heroine and provide the backbone for the fairy tale feel of the story. 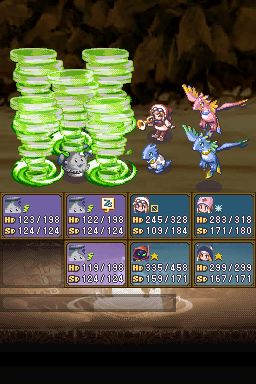 Composer Tenpei Sato provides a whimsical and light soundtrack for Rhapsody, emphasizing simple melodies for field maps and an upbeat but repetitive battle theme. The soundtrack truly shines in its vocals, key story scenes feature full-length songs that express the emotions of the characters and situations they’re facing. All of the songs were kept in their native Japanese language, but are properly subtitled for understanding.

Throughout her adventures, Cornet will gain more allies in the form of puppets and fight the evils of teenage drama and wicked witches. The story is charming and extremely cheesy at some points. Even so, Rhapsody does take the time to make fun of itself. This game knows its story isn’t unique. Fans of Nippon Ichi Software’s sense of humor won’t be disappointed. The dialogue is rich and witty, sometimes even breaking the fourth wall in order to lighten the mood.

In terms of gameplay, the remake of Rhapsody for the Nintendo DS completely overhauled the original strategic RPG battle system in favor of a dual-screened turned based system. Players can touch the bottom screen for the menu, special abilities, and battle commands. Although battles are less cumbersome now, they’re terribly simple. Rhapsody definitively suffers from being painfully easy. The lack of difficulty makes this game a very short ten hour adventure with no real sense of achievement.

The simplicity continues in the interface of the game. Outside of battles players drag Cornet around towns and dungeons with either the stylus or d-pad. This makes the game easy to pick up for even the most novice of RPG players, but with a lack of extras to do outside of the battles, there really isn’t much to grab players here. 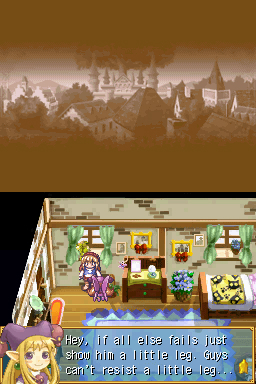 As a whole package, Rhapsody delivers a charming and entertaining tale about love and finding one’s happy ending. It falls short on replay value and extras; the oversimplified battle system may bore some fans from even finishing the game though others may find the easy navigation and menu system to be inviting. It’s an easy, relaxing adventure, full of song and dance for fans.