It’s difficult to review a completely passable albeit uninspired game. There’s nothing you can really grab a hold of and harp on for paragraphs on end. Conversely, there is no diatribe to be launched into about how other games should take note of how this specific game has changed what was previously thought to be possible in games as we know them.

Time Hollow is such a game. One part Butterfly Effect, one part Ace Attorney, and a whole bunch of redundant gameplay thrown into the mix, and you start to understand how Time Hollow works. Story is such a big part of an adventure game that I will only say that the story in this game is fairly typical, though it has some good twists one would expect in a story drenched in time travel. 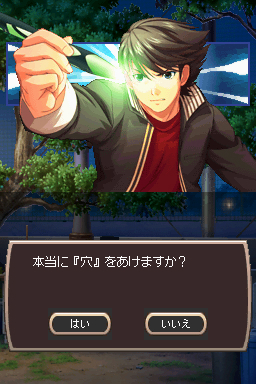 The main character, Ethan Kairos, is a boy who finds himself thrust into the complexities of time travel by the unlikeliest candidate: a pen. It’s more than just a pen, though. It’s a hollow pen. Such a pen gives Ethan (and by proxy, you) the ability to draw portals in the air in order to revisit a cache of memories he holds. These memories are key in moving the story forward, and they are gathered by visiting different places around town and interacting with the people and objects in those places. The supporting cast in the story is pretty stereotypical but the game makes a decent attempt at tugging on your emotions by putting them in tight situations. Unfortunately, the town itself is extremely small, and this makes the gameplay lose any luster it might’ve had very quickly.

The game also starts to take a turn for the worse in the latter half because Time Hollow starts reusing memories and plotlines in order to drag the game out further. It gets to a point where the player may find it extremely difficult to continue drawing holes on the screen and trying to find the next person to talk to in order to trigger the next events. There are some features, however, that would encourage you to keep playing.

The voice acting is very good for a video game, and more specifically a DS game. The music is nice as well, keeping pace with what is happening in the game and enhancing the experience through music score. The sprites are also very nice. They are right on par with other DS adventure games like Trace Memory or Ace Attorney. Unfortunately, that is where the similarity with those top notch DS adventure games ends. 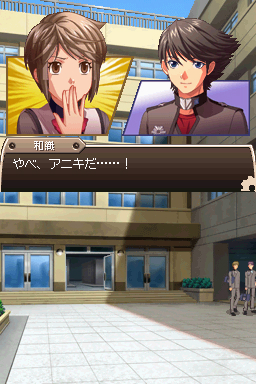 The characters aren’t charming like in Ace Attorney, nor does the plot stay fresh until the end. The gameplay isn’t intriguing and varied like Trace Memory either. Time Hollow clings to mediocrity until the last hollow pen hole, and I can guarantee you won’t be compelled to ever pick it up again upon finishing it. That is, if you’re even compelled enough to in the first place.