Atlus has been incredibly busy with the Persona series as of late. In a little over a year they released Persona 3, Persona 3 FES, and just recently gave Persona 2: Eternal Punishment a reprint. Now they’re bringing Persona 4 to the aging PS2 in time for Christmas. Persona 4 uses the same basic formula as Persona 3, so jaded cynics might think this would be shameless milking. However, Persona 4 has a completely different taste and offers up a genuinely unique story to make the game as different from Persona 3 as possible, without messing with the Persona 3 formula of combining dungeon crawling and life-sim elements.

The story for Persona 4 is, in a word, refreshing. Virtually every RPG opts for a typical save-the-world story. Even Persona 3, with all its refreshing innovations, still had the typical save-the-world story. In Persona 4, it’s a bunch of high school kids coming together to solve a supernatural mystery: People wind up dead after a heavy fog falls on the small rural Japanese town of Inaba. To make things even more interesting, many of the characters who join you would’ve wound up dead had you not saved them. In Persona 4, the murderer throws people inside TVs, whereupon they enter the TV world and eventually die by being attacked by shadows. On top of figuring out who is doing this, you also have to find and save the victims by jumping into the TV yourself. Even though the plot is small in scale, the story is incredibly focused and intimate. This is enhanced further by the dungeons you enter, each a reflection of the vices of the character you’re trying to save. 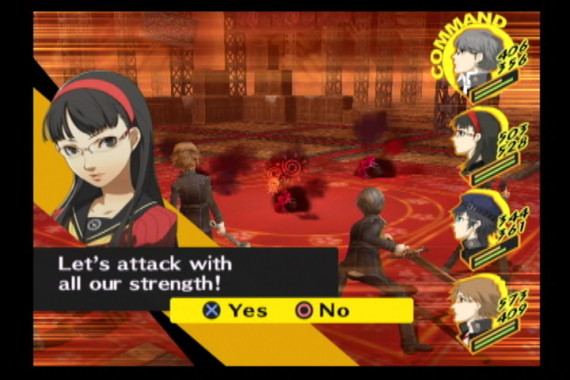 Unlike Persona 3, where it was just one giant dungeon that you could visit whenever you pleased, Persona 4 has strict deadlines for each new dungeon that opens up in the TV world. If you do not save a potential murder victim before the date when the fog settles on the town during the night, then you have failed and the game is over. While you have the same amount of freedom in Persona 4, there is always a sense of urgency in saving a possible murder victim. This sort of tug o’ war between free time and urgency has never felt more perfectly balanced than in this game.

A few problems many players had with Persona 3: there was very little to do during the free-time portions late in the game, S. Links seemed to be too difficult to improve, and that the random dungeon generator for Tartarus wasn’t as great as it could be. All of those issues have been fixed for Persona 4. To start with, since visiting a dungeon consumes a block of time during the Daytime or After School period, you have a choice of increasing S. Links and stats or going spelunking. You can’t explore dungeons in the evening but there are a host of different activities you can do in the evening, such as cooking lunch for tomorrow to eat with a friend to improve your relationship with them, work a part-time job to get money, increase stats by either studying, reading a book, making a model in your room, or partake in a few of the night time-only S. Links. Since there are multiple dungeons in Persona 4, they now each have their own random dungeon generator. This generator makes each of the dungeons have more apparent themes than the various blocks in Tartarus had. Finally, S. Links are now much easier to increase, because a good mark on exams can add a multiplier to all school-related S. Links. This multiplier can stack if you hang out with them while carrying a Persona that matches their S. Link. With all these changes, there is always stuff to do at all times, and Persona 4 never really feels like a grind as a result. 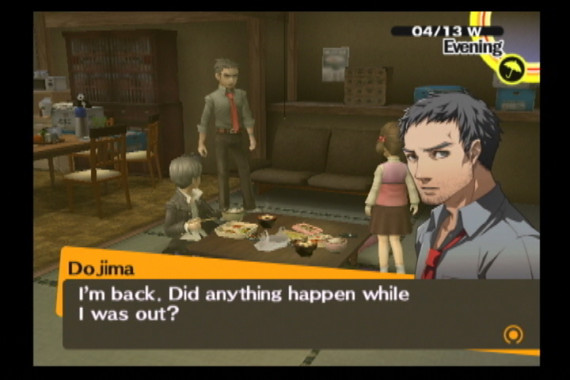 On top of those fixes, there have been many subtle but notable improvements from Persona 3 to Persona 4. You can now hang out with all the characters in your party, not just the girls. Increasing your S. Links with those characters also gives them special abilities in a fight, such as taking a hit that would’ve otherwise killed the protagonist, to helping up a knocked down character, and ultimately unlocking their evolved Persona for improved elemental resistances. You can use the square button to instantly travel to another section of the area when you’re in town, or change assigned tactics when in a dungeon. There is now a Guard command which allows you to take drastically less damage and invalidate any weakness for one attack. Most importantly though is the ability to turn AI control on or off for each individual character.

To help in making Persona 4 feel less of a grind, the use of music is much improved. While the music still uses cool contemporary themes, there is far less repetition of it than in Persona 3. Different songs are used depending upon the weather, with no music during rainy periods for a slightly more threatening ambiance. Each dungeon has its own unique theme instead of just having additions and variations to the one theme that was used in Persona 3 for Tartarus. Regardless, all of the music is memorably catchy and it always makes the game feel lively and less like a chore. For a game that’s as long and as involved this one, a varied soundtrack is a huge plus.

The voice acting too is as solid as it was in the previous game. The characters all come to life as having their own distinct personalities through their voices, making them extremely memorable. Though one character’s voice direction did a bad job of conveying a particular plot point, the quality of this particular voice is still in many ways superior to the Japanese version. In a game that can last for close to a hundred hours, acting quality is all that really matters. 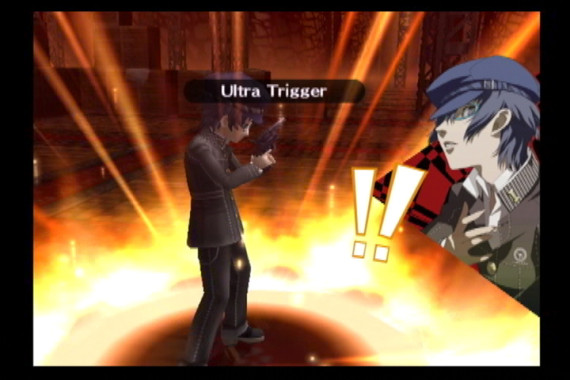 Persona 4 is a very long and involved game that never seems to drag. With multiple difficulty levels, and the option to start a New Game+ to carry some data over to consecutive play-throughs to find even more secrets, the game can suck away a lot of your time. Atlus has really created something special with Persona 4, because it still maintains the freshness of Persona 3, while also being different and in many ways superior. Since Persona 4 is being offered at a budget price on the Playstation 2, there is no excuse for missing this game.