Back when Mario made his first appearance as the referee in Tennis on the original Nintendo Entertainment System, no one knew how prolific a sporting career Nintendo’s red capped mascot would enjoy. Almost twenty five years later and several Mario tennis titles in, the series is alive and prospering having become one of the more prominent auxiliary Nintendo franchises. So when Nintendo announced the revolutionary Wii Remote control system and showed off the Wii Sports version of Tennis, it was obvious that the next Mario Tennis title would need to take full advantage of new technologies.

New Play Control! Mario Power Tennis is not a new game but instead a port of the Gamecube game Mario Power Tennis adapted with Wii controls. It has all the standard features of the original including various tournaments to compete in and a plethora of mini games like ring challenge and tennis painting. All the courts and characters are back including the ever popular Yoshi and Diddy Kong as well as the questionably cast Wiggler. Nothing is really added to the package as far as content is concerned, which feels like a huge missed opportunity. The new control scheme could have made way for any amount of new and captivating mini games, something that would definitely add to the longevity of the game. Especially considering it is nearly five years old. 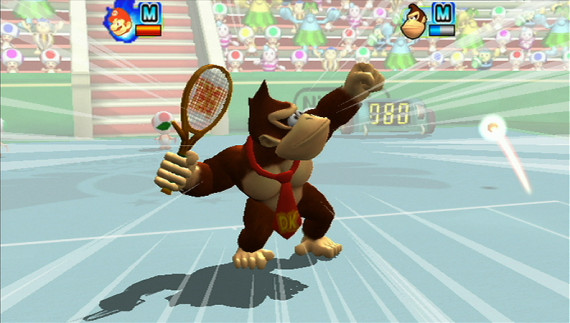 However, the reason to play this game, or not as the case may be, is the Wii motion controls. As expected, all of the various shots are controlled via a few swings of the Wii mote. Slices and topspins are executed with a few minor wrist adjustments making rallying a breeze. There are a variety of ways to control movement. By using the Nunchuk, the game plays almost identically to the GCN, which begs the question: Why not play it on GCN?

In the new mode, however, moving is controlled automatically, except for the minor pre serve positioning which is adjusted with the d-pad. It feels frighteningly similar to Wii Sports Tennis and unfortunately, suffers from the same problems. The player is highly restricted and limited. Regular tennis strategies, like serve and volley or chip and charge, cannot be used and players are not able to switch between offense and defense freely. The result is an extremely rigid game that boxes players in rather than giving them the freedom to play as they wish.

The problem is compounded by the various offensive and defensive power moves lifted from the Gamecube version. The auto move often fails to anticipate shot trajectories properly making the shots even more imbalanced than ever. The ability to use a Gamecube controller is also restricted, meaning players are forced to play with an inferior control system.

It’s disappointing especially since the draw of the Mario Tennis franchise has always been rooted in its ability to blend arcade style game play with a deep and responsive control system. Previous games relied on positioning, timing, and shot selection, all of which could greatly affect the outcome of a match. The new controls make matches frantic wii mote waving contests, rather than a series of strategically played points. 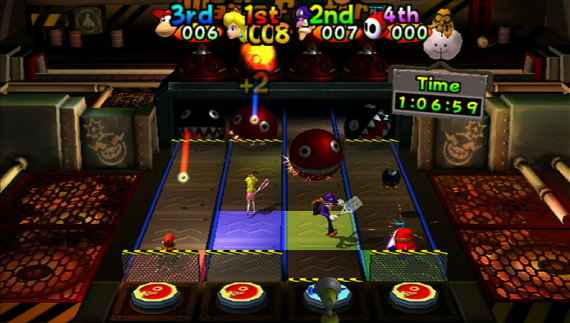 All things considered, Mario Power Tennis Wii is a stripped down version of a five year old game. It alienates the hardcore by implementing an overly simplistic control scheme and offers nothing new by way of mini games or additional content to make it worthwhile. It’s essentially Wii Sports Tennis with a fresh coat of Mario-themed paint, which at this point is just not enough to warrant a purchase.