It’s been nearly 10,000 years since Pokémon reared its head stateside. Since then it has become one of the biggest phenomena in history spawning a countless number animated television episodes and a smattering of movies each introducing new characters and creatures to the universe. The most impressive thing about the series, however, is its ability to spawn an innumerable amount of video games that, while similar, have continued to draw in a countless amount of prepubescent teens and school age children.

Pokémon Platinum, the latest in the venerable series, rounds out the trio of Diamond and Pearl with what is undoubtedly the best Pokémon experience to date. Nintendo has obviously put in a lot of hard work. Pokémon Platinum sports a variety of new features and control tweaks that fans of the series will no doubt notice and appreciate. Even newcomers, once they get over the barrier of trying Pokémon, can find something they can truly enjoy. 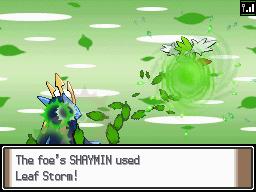 If for some odd reason you’re not familiar with Pokémon lore, each story and each game starts when the hero, an aspiring Pokémon trainer, travels to the local Pokémon professor to choose his very first Pokémon. From there he/she must travel around the world battling elementally themed gym leaders to become the greatest Pokémon trainer in the world. It’s a pretty basic story but one that camouflages numerous surprisingly deep and interesting features.

As a rising Pokémon trainer you are able to capture any creature you meet in the wild by weakening them and throwing Pokéballs at them. At any given time six creatures can be carried with you although a limitless amount can be stored in the PC’s found around the world (though I still don’t understand how an animal can fit inside a computer). Each of these aforementioned Pokémon have certain affinities which can be matched up against Pokémon with other affinities, creating an intricate game of rock, paper, scissors where water beats fire, fire beats grass, grass beats water, etc. As such it is important to consider which Pokémon to take with you at any given time. In addition the sheer number of Pokémon and evolution paths means there are a limitless amount of party combinations to choose from. It is safe to say that no two adventures will be exactly the same.

At $34.99 the game is a real bargain. The story mode boasts anywhere from 25-50+ hours of game play depending on the player’s dedication to the “gotta catch ’em all” philosophy. Even without an overly obsessive personality there are plenty of features to stretch out the longevity of the game. A robust multiplayer battle and trading system allows players worldwide to interact with each other in both competitive and friendly ways. There are also underground areas just waiting to be explored and the addition of the Battle Frontier allows players to challenge themselves long after the completion of the main story. 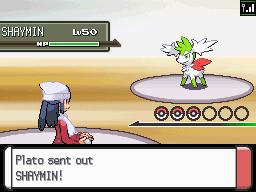 Sure Pokémon Platinum may not exactly seem like the manliest game, but with a sound battle system, a lengthy main quest, and a variety of multiplayer options, it may just be the best hand held RPG available right now.