Let’s be clear from the start: Lux Pain is broken. More than just a bad game, Lux Pain is a special kind of awful. Not because the gameplay is shallow and pointless, although that’s part of it, but because its core identity is sabotaged by a stunningly ham-handed execution.

Lux Pain is a visual novel, which is a bit different from text or even point & click adventures. The puzzle solving that’s at the heart of the latter two genres is almost completely absent, replaced with a focus on following a story and interacting with its characters. In practical terms what this means is that there’s a whole lot of reading, with infrequent moments of simple mini-games and the occasional conversational choice. Basically, traditional gameplay is significantly less important than story.

Lux Pain’s story follows Atsuki Saijo, a psychic high school boy working for the secret organization FORT. FORT’s job is to fight the Silent, which are mind-parasites feeding off negative energy and inspiring people to commit terrible acts before self-destructing. Atsuki’s primary tool in fighting the Silent is his ability to read Shinen, which are both the thoughts in people’s minds and the thought-imprints they leave behind in areas they’ve felt strong emotions. 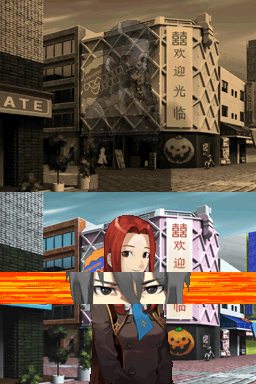 The town of Kisaragi is experiencing an outbreak of Silent, evidenced by a rash of suicides. The only way to fight the outbreak, of course, is for Atsuki to go to school there and integrate himself into the town, interacting with a giant cast of nicely-drawn characters. Talking to them sometimes gives a shot at detecting Shinen, and the more hidden thoughts are uncovered the deeper and more twisty the story gets. Detecting Shinen detection and fighting the Silent, which happens infrequently, are the only parts of the game that don’t require lots of reading.

For Lux Pain to succeed, the writing has to be good. It’s too bad, then, that the script is so poorly proofread that any impact the story might have had is DOA. Typos, no capitalization at the start of sentences, odd use of symbols, and many more offenses to the English language crop up in every conversation. For example, this is a direct quote from a text box, formatted exactly as it appears in-game: 4days ago she got us the address of an animal abuser.

This is an ugly example but hardly unique. Even stranger, the spoken dialogue is better-written with good voice acting. The rest of the script felt like a first draft had been used instead of an editor’s final version.

Even had the story’s presentation been better, the plot itself is juvenile and cliched. The characters are pure anime stereotypes rather than human beings. The game deals with some promisingly dark themes, since Atsuki’s psychic abilities show how easy it is to throw a polite and friendly surface over emotional wounds, but it’s all ruined by the stupid things the characters say in the unvoiced text. The crowning touch is endless pandering in the form of dozens of cute girls, ranging from a gothic lolita to several women who act like they’re no older than the other high school kids in the cast. Lux Pain is essentially a highly concentrated dose of all the embarrassing, stupid things that keep fans from admitting that they like anime. 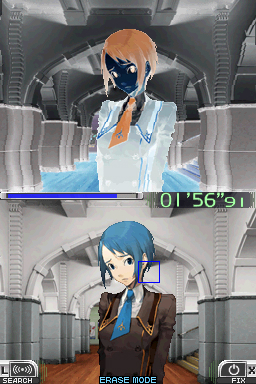 In a more standard type of game this kind of poor writing can be overlooked, but Lux Pain’s simple mini-games are only a small part of the overall experience. When a Shinen is detected Atsuki uses his power to rub away at the scene, searching out the thought-worm underneath it. Once found he then rubs the worm (not a euphemism for anything!) until it disappears, revealing a phrase that leads to a jumble of hidden thoughts. Every once in a while the plot turns up a Silent, and while there’s a bit of variety in their mini-games there’s no depth. Story and characterization are everything to Lux Pain, but horrible writing betrays it in every scene. It’s a complete train-wreck of a game, only suitable for those with an appreciation for the amazingly awful.