Velvet Assassin is a difficult game to score. It gets a lot of things right that most games routinely miss the mark on, but then turns around and makes mistakes with certain aspects that should have been gimmes.

In the game, you are Violette Summer, a particularly bad ass lady sent into the heart of the beast of World War II. Planted deep behind enemy lines and tasked with causing as much inglorious bastarding to the German troops as one can conceive, you are privy to first-hand experiences of the atrocities of war. The game starts questioning your moral pitch from the very beginning, as it picks up after a mission gone terribly wrong. The more you learn about the plot the more dark and intriguing it really becomes. The entire game is heavy with questioning your morality and it helps to make Violette one of the more engaging and sympathetic characters in recent history.

Hitman though, most of the levels stay fairly linear. You are, however, given a few interesting ways to end your enemies pesky breathing habits and they add a nice bit of depth to the game. My personal favorite is being able to sneak up on a soldier and actually pull the pin on one of their grenades. Messy, not very stealthy, but definitely rewarding.

The game also does a good job of paying off your patience with stealth assassinations. Finishing a level and doing it with a minimum of fuss is a good feeling. This is a good thing, because the gun mechanics in this game are almost unbearable. Sluggish, inaccurate, and just generally terrible they do nothing but detract from a decent game experience. It would be one thing if the combat sucked because it isn’t supposed to be the focal point of the game, but Velvet Assassin throws a couple situations at you that are supposed to be high energy gun battles and really just end up being terrible exercises in futility. 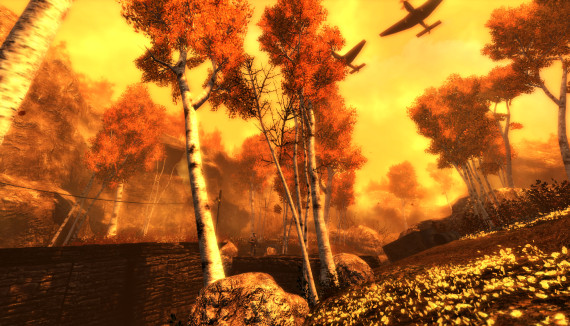 Perhaps the most puzzling gameplay mechanic is the inclusion of morphine. Occasionally you will find the drug hiding throughout a level and will be able to inject yourself with large amounts of it to enter some bizarre dream-like state where you are nearly invulnerable and can simply dispatch foes at your will. For a game that’s strongest point is its realism, the inclusion of this immersion-shattering and insanely generic plot device is entirely unjustifiable.

While the stealth gameplay may be rewarding, it isn’t necessarily enough to save this game in the face of the unnecessary junkie strength and the horrible gunplay. What really gives this game its points is the atmosphere. Velvet Assassin does an absolutely phenomenal job of capturing how ugly war is and what a broad moral gray area it exists in. You will routinely stumble upon atrocities, whether it be slaughtered civilians piled up at an important choke point or the cries of prisoners being tortured. You being helpless to deviate from your goal and rescue them. Even the enemies will occasionally make you question yourself and your characters motivation when you overhear them speaking of the good times they’ve had or their families from back home. This game makes you feel for your enemies in ways that many of this genre overlook. Not every soldier you kill is some dark and evil German wolf looking to shed the blood of his enemies, many of them are just people who are far from their families and in a difficult situation.

That isn’t to say that they are all saints, and just as often as you hear a group of Germans discussing their girlfriends back in their home cities or the women they left in France, you will hear some relish their cold blooded murder of civilians or their torturing of prisoners of war, which make it feel that much better when you take them down in the goriest way possible. Something that doesn’t make killing enemies very rewarding is how absolutely predictable the AI is. It isn’t the worst AI I’ve seen by any standards, but considering the immersion and dedication to representing the realism of war, incredibly wooden and predictable AI reactions and paths just seem like an odd oversight.

In the end, Velvet Assassin is definitely worth a playthrough. The grim view of war and entertaining stealth mechanics make it so it will certainly be entertaining, but the stodgy AI and useless gunplay keep this from being a must-have title. It really is a shame, because I am hard-pressed to think of many games that capture the atrocities of war in such a realistic light.