To be honest, I wasn’t really entirely interested in Killing Floor before its release. I know a handful of people considered it an anticipated title, but I was hesitant. I only really became interested in it when my Left 4 Dead CAL clan all decided to purchase it. I gained a little bit more interest when I realized that this was actually the retail release of the UT mod of the same name. I love a good mods-to-riches story, who doesn’t? One of the greatest games of all time, Counter-Strike, was originally a mod and now it is considered an iconic PC title. When a mod is plucked from the free community and invested in, it is because a company believes that mod is going to make money. This is how you can almost always bank on mods in this same situation being stellar. It is like when in baseball when some kid straight out of high school get bumped into AAA or even the pros, or in hockey when some 18 year old is on the starting lineup of a playoff contender, or in football when a team spends a high draft pick on a guy from a Junior College or Division II school. I went from uninterested to checking the “fully interested” box on my Anticipatiometer.

Then I saw the price point. 15 bucks pre-ordered. I kind of did a double take. What was wrong with this game that made it so it couldn’t even be put out at a normal price? Now, this isn’t a slight towards some of the great value games that have come out recently, but even those great titles they are weighed against a whole lot of weird and terrible crap. Again using my fantastic sports analogies from above, this would be more like that football team drafting a guy in the last round that is actually a downhill skier and thinking “Well, if it works we look like geniuses,” and not having much to lose otherwise. Still, at the very least it had to be entertaining, right? Kind of. 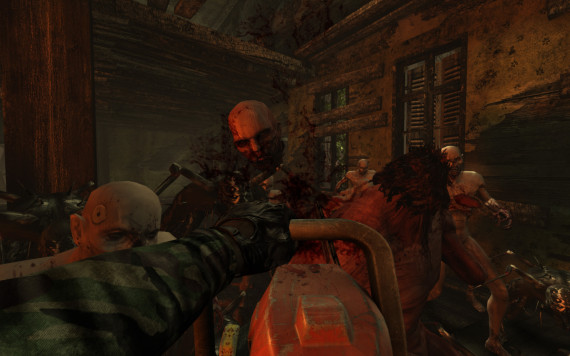 In Killing Floor you are either a cop or a soldier thrust into the middle of Armageddon. Much like Left 4 Dead or 28 Days Later, these are not traditional zombies, but instead failures of a vast cloning experiment gone all survival horror. You can either pick up or purchase a decent amount of weapons to protect yourself against the world republicans see if cloning was unregulated and encouraged. You fight wave after wave of these creatures until, eventually, they are all dead and the Trader opens her doors for you to come spend the money you’ve earned slaying zombie things on more weapons. Eventually you reach the end of all the waves and get to fight the granddaddy of all cloning experiments, The Patriarch. A bad ass clone with a bad ass chain gun. Only after beating him do you actually win the day.

Sounds pretty exciting, doesn’t it? I hope so, because that is the only game mode contained within this title. One of the complaints levied against the initial release of Left 4 Dead was its lack of game modes but Killing Floor has even less to go on. Only five maps are shipped from the start, and while each map is large and relatively varied, you still know you are going to gravitate to the same point every time. The AI also isn’t particularly advanced and pretty much just spawns arbitrarily on wherever your group is centered. It can get very predictable and limits the amount of teamwork needed.

The inclusion of the roaming trader adds a bit more strategy to the game, as you have to judge where you camp out against the baddies and the distance from the trader. Very rarely do you actually have to make that decision, as I have yet to find a spot anywhere on the maps that I couldn’t reach a trader on time to make my purchases. I’m sure maybe if I ran clear to the other side of the map by myself, I might not be able to get back to the surly and honestly pretty slutty trader, but I would deserve my cold death for doing anything that illogical. 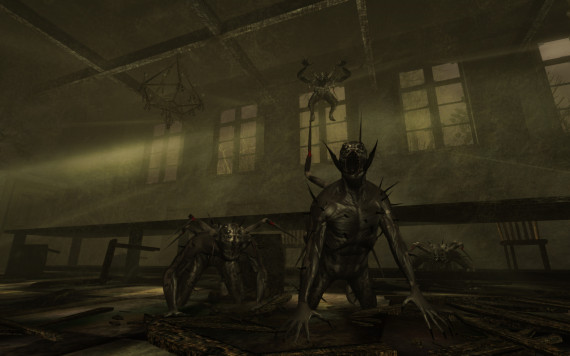 The different guns and different class specifications make shooting the clones relatively rewarding, and at first the games bullet (ZED) time makes going for the headshot that much more fun, but after a while it just gets repetitive and you wish you could turn the feature off. It is kind of helpful when a buddy’s ZED time helps you pop some well-aimed shots off against some infected, but it really doesn’t help you much and most of the time just happens while you might not even be in combat. It can be frustrating. To try and further vary the gameplay, Killing Floor also has a basic RPG element. Doing certain tasks such as causing damage with specific weapons or getting so many headshots will level up one of your classes, or perks, which you can activate during each wave. The perks don’t really change the gameplay up to much, but they help to alleviate some of the repetitiveness that plagues this title.

Technically speaking, the game isn’t the freshest-looking on the block, but it doesn’t look bad. The entire thing is more Counter-Strike than Left 4 Dead, from the design choices to the teamplay elements. The only really negative point aesthetically is the sound and voice acting. The dialog would give Space Force: Rogue Universe a run for the All Your Base Award. They also initially had some serious problems with the server browser and connecting to games when it first launched, but in the time I started this review and now they seem to have corrected most of those problems. 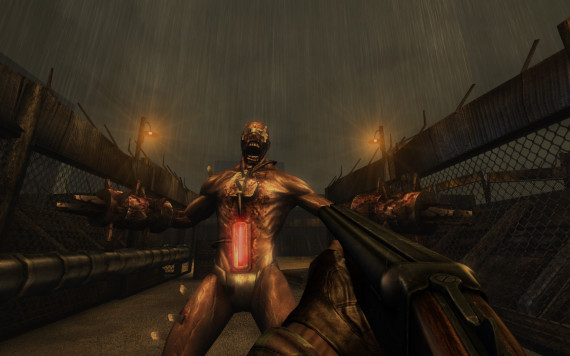 While it was obvious from the beginning that this shouldn’t have been compared with Left 4 Dead like so many people on messageboards everywhere felt necessary to do, it still doesn’t really stand out by itself either. Massive repetitiveness in the gameplay makes this hard to recommend. It really does just feel like a well-polished mod, but not one that you will be going back to very often. However, the low price point does mean it takes less to get your money’s worth out of it, and if you are in the market for a survival horror game that feels a little bit more like CS than L4D, you might want to take a hard look at this.

Ironically enough, this might be one to keep your eye on as the modding community gets a hold of it. Despite the flaws, this game has enough potential to end up standing out.