Once upon a time, a kingdom went to hell. The land was covered with a mist that let no one escape, and any hero who tested it was never heard from again. Meanwhile, in the real world, gamers got used to being given things that should have been earned, as features like adaptive difficulty made completing a game a simple matter of tenacity. One day the gamers ventured into the demon-infested lands of Boleteria and died repeatedly, over and over and over again. And it felt great!

Demon’s Souls is an unforgiving but rarely unfair dungeon romp, pitting a bull-headed adventurer against all the monsters, soldiers, traps, demons, and other assorted fatal diversions that a land ravaged by the mists of hell can hold. It’s a huge, tough, sprawling epic that knows you can do better, and is determined to get it from you by being so damn excellent that it’s almost impossible to stop playing. As a nice bonus, the more you play the less tough it gets, as experience fighting the cursed souls of the dungeons shows that, yes, the enemy can be dealt with in an efficient and (relatively) painless fashion. 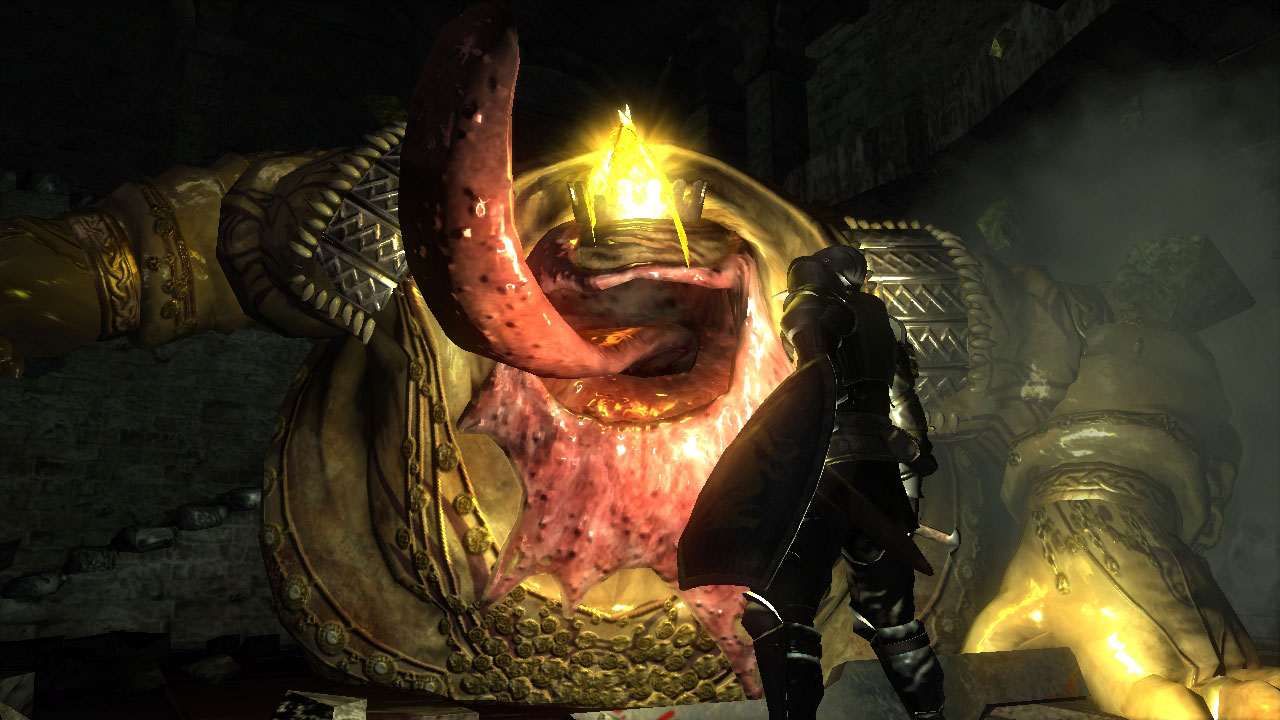 Leveling up has its place, of course, but surviving is about learning more than stat manipulation. At the start of the game you choose a character from the usual variety of classes, some more difficult to handle than others but all workable with the right tactics. Choose a gender, play around with the face editor, and dive into the tutorial dungeon where, after a couple of practice enemies, the first boss kills you stone-cold dead with a single hit. Whoops.

Death in Boleteria is an inconvenience instead of an ending. Your soul is promptly deposited in the Nexus, where it can either hang out for all eternity or try to reclaim its body from the demons dominating the land. This would be a bit easier if being in soul form didn’t halve the hit point gauge, but without the meat-shield of a body those hit points are gone. Eventually one of the area’s hazards is going to get through, and then it’s back to the starting point to try again, with all the enemies brought back to life. The worst part, though, is that every soul you’ve earned is left at the point you got killed.

Demon’s Souls’s currency is, logically enough, souls, and every defeated enemy earns some. Souls are needed for everything, from equipment to healing items to stat and weapon upgrades, and none of it is cheap. The worst part of death is losing souls, but there’s still one last chance to get them back. When you die, a blood stain is left behind, and it’s got your full stock of souls waiting to be picked up. Die again before reaching it and they’re gone forever, no matter how many there were. Some of the hardest decisions in Demon’s Souls are whether or not to press on when you’re carrying a large amount of souls, knowing that retreating to the Nexus will cause the level’s enemies to respawn. As a rule it’s better to spend them, because there is no Bank of Souls, but the temptation to see around the next corner is hard to resist.

Most of the time, what’s around the corner is some kind of monster, and it’s capable of doing major damage. Combat in Demon’s Souls is fast and brutal, and incredibly satisfying to boot. The right hand attacks, the left hand blocks, but there’s a world of technique in there as well. Each hand can equip anything, whether it’s a shield, magic wand, holy relic, or weapon. Spells and miracles happen the same no matter which hand they’re held in, but fighting with two swords means the one in the right hand has a fast and strong attack using R1 and R2, while the left has guard and attack using L1 and L2. A shield, on the other hand, blocks with L1 and parries with a properly-timed press of the L2 button, leaving the enemy wide open to a critical counterattack that will most likely kill it in one hit. A hit in the back will also score a counterattack, and this is where the dodge roll comes in. 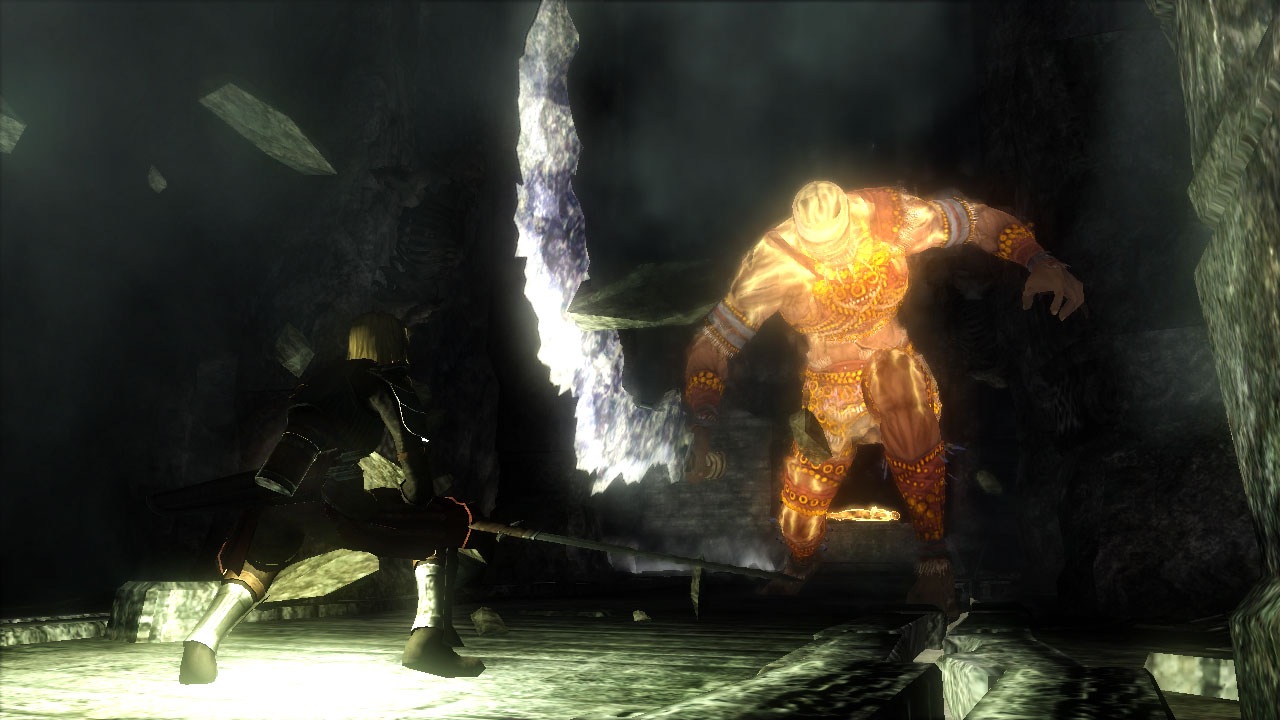 The circle button has two, and they’re going to get used a lot. Press it while running and you sprint, or press it with an arrow key for an evasive roll. Rolling to the side when locked on to an enemy is the quickest way to circle around it, with any luck exposing its back for a quick critical takedown. More importantly, an evaded attack doesn’t cause damage, and most missed attacks have a window of recovery if you’ve got the stamina left to take advantage of it. Every action beyond running requires stamina, and once the gauge is depleted you need to rest a couple of seconds to let it refill. There’s no attacking with an empty gauge, and while it’s possible to block one attack the shield will be swept aside, leaving you wide open to a follow-up. There’s a tempo to battle, and just pounding the attack button isn’t going to cut it.

Outside of fighting there’s still plenty to do. Demon’s Souls is as much about exploration as it is monsters eating your face. There are weapons to forge, stats to manage, dead bodies in odd places to loot rare equipment and other goodies from, and even level tendencies to manage. Each area has a tendency towards light or dark depending on your actions, and this effects events within the level. A dark level will have tougher monsters that have better loot and more souls, while a light level will have weakened monsters with, unfortunately, fewer souls and less interesting goodies. Seeing everything Demon’s Souls has to offer will require pushing the tendencies both ways through multiple play-throughs, The easiest way to do it, though, is through multiplayer.

Demon’s Souls handles multiplayer differently from any other game. It’s always online, picking up details from other people and populating your world with them. Blood splats where other players died show their last few seconds, giving hints as to what might have killed them, while messages are scrawled on the floor giving advice like “trap ahead” or “strong enemy”. Multiplayer, both co-op and competitive, is also available, and it’s got a unique implementation. There’s no use of friends lists to invite people in, and no voice chat either. Instead all gaming is done with random people, and how it works depends on whether you’ve got a body or not. When in body form, you can invite those in soul form in to fight alongside, and if the party defeats the boss of the area then the world shifts to white, and the souls get their bodies back. On the down side, other players can also force their way into your game as black phantoms, and if they kill you they get their body back and a nice reward of souls to boot. Finally, when you’re in soul form you can either accept random invites for co-op or be an evil black phantom, depending on how helpful or evil you feel like being. 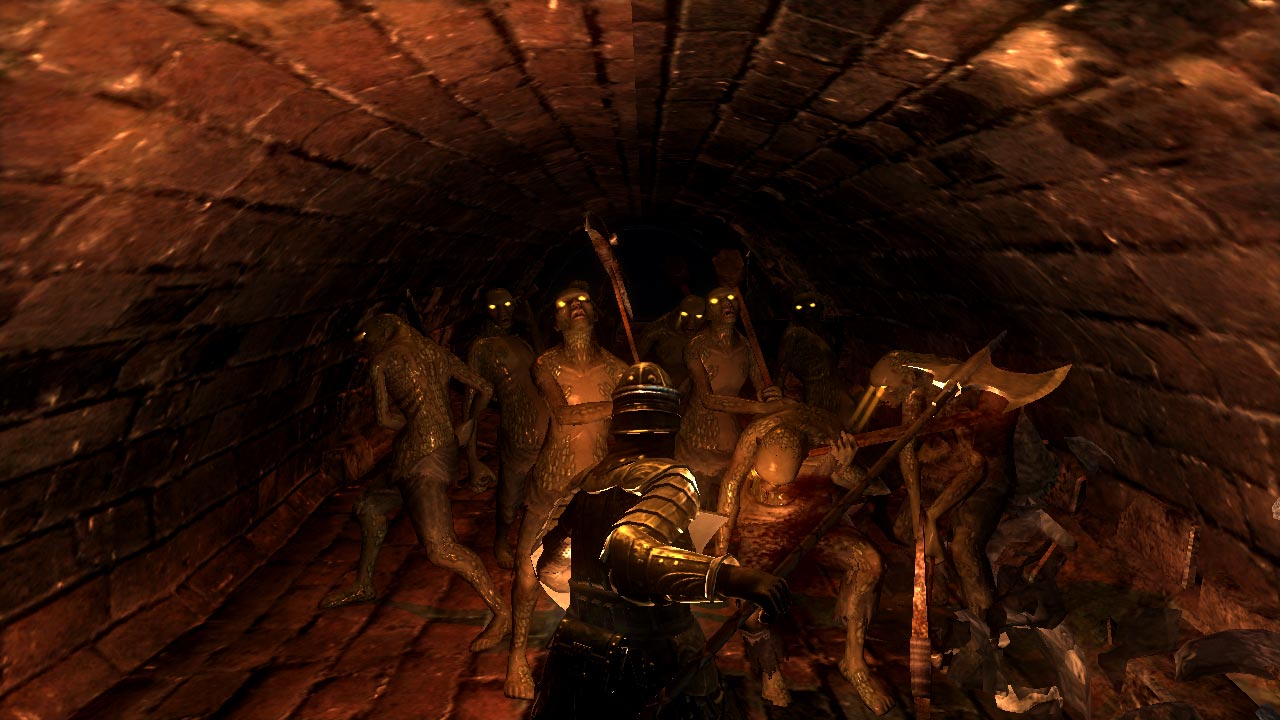 Demon’s Souls is a huge, epic dungeon crawl, loaded with variety in level design, monsters, and the tactics to deal with them. It’s not quite flawless, thanks to a camera that can view the action from exactly the wrong place every now and then, but every third-person 3D game in the last 15+ years has had that issue to varying degrees. The environments are fun to explore, with hidden goodies all over the place, and no two levels look alike. The combat is fantastic, everything has a sense of weight behind it, and every hit feels like it’s causing major damage. To top it off, the difficulty is just right. Enemies kick your head in until you learn how they work, and then they’re a nice challenge until you’ve leveled up beyond them, and even then several at once can be trouble. Demon’s Souls knows that winning is something to be earned, and the satisfaction of living up to the challenge it presents is its greatest reward.