In high school, I had to do a physics experiment where I was told to create a protective covering for an egg using aluminum foil and Popsicle sticks, which was later dropped from a second story window. Gravity triumphed, of course, and my egg exploded, but I remember thinking how cool it would be to put a ton of magnets on the bottom of the egg and more magnets on the ground so it would just float like a UFO and everyone would applaud me and the teacher would give me a 102%. Impossible dream, they said, but it appears Gravitronix has arrived to bring enjoyment to the egg physicist in all of us.

The first noticeable thing about Gravitronix is that it doesn’t waste any time getting into the action. The menu offers two modes – campaign and versus – alongside a text tutorial. After choosing a character, or assigning teams in versus mode, Gravitronix presents its bare-bones playing field.

A large circle is divided into two to four segments with the players (represented by bumpers a la Arkanoid and the character’s portraits) lying outside their segment. Each segment has separately-colored “shields” that the characters must protect. Materializing in the middle of the field are various shapes (cubes, shards, spheres, and pyramids) that will destroy part of the shield if they come into contact with it. 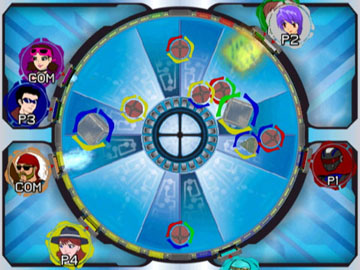 Each player has two abilities at their disposal to stop the shapes from damaging their segment’s shields – pushing it, or grabbing and shooting it – both performed with simple button presses. To move your character, however, Gravitronix features unique motion control in which you hold the Wiimote or Nunchuck like a doorknob and simply twist your wrist to move your bumper. It works surprisingly well and becomes second nature after only a few seconds of practice.

You won’t be able to win by focusing solely on defending yourself, though, so you must also send the shapes towards your opponents’ segments in an attempt to take out their shields. By pressing A (or C on the Nunchuck), a gravitational force will shoot out from your bumper that will push the shapes away from you. Or for a little more control over where you send a shape, you can press and hold B (or Z) to take hold of the shape and freely aim it in the direction you want before firing it. While holding a shape you can press A to place an explosive charge on it for even more damage – but be careful that it doesn’t explode before you can get rid of it!

It won’t take long for the player to realize that Gravitronix is primarily a multiplayer experience because the computer AI is simply stupid. They will endlessly move up and down their segment at a snail’s pace and rarely aim the shapes with any kind of strategy. There was hardly any challenge until the later stages of the campaign mode. Multiplayer versus matches are much more fast-paced and chaotic and show off what Gravitronix is truly capable of, and supports up to eight players (using a combination of Wiimotes and Nunchucks), so keep that in mind when making a purchasing decision.

It is obvious that the main focus of Gravitronix is the gameplay as none of the visuals are particularly impressive. The playing field is very simple and the shapes are nothing you haven’t seen in a Geometry book. The eight characters, however, are relatively charming and have a slight hint of personality despite each having only a handful of spoken dialogue. There is just something about the biker with majestic angel wings and two shotguns holstered on his shoulders, or the female drill sergeant, that makes the characters more than ordinary. I could do without the robot character telling me to take game breaks after every other match, though. 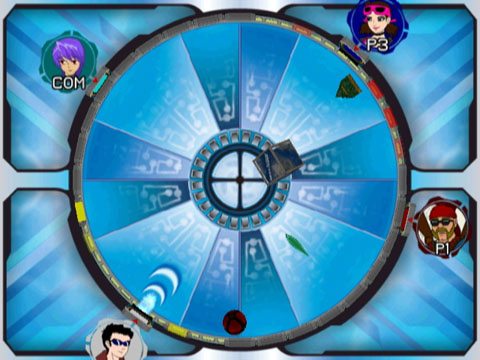 Gravitronix is a novel game with a distinctive control scheme that matches the gameplay perfectly. My only gripes are that it’s not very attractive to look at, and that the single-player offers very little competition or fun. If you do have others to play with, though, Gravitronix will provide some seriously amusing shape-shooting warfare that’ll make the 500 point price seem like a bargain.