The DS has played host to many great SRPGs like Disgaea DS and Final Fantasy Tactics: A2. Now, Aksys has added Hero’s Saga to the system’s roster of well-crafted entries in the genre. While I wouldn’t put it on top of that list, it does a lot of things right and largely provides a satisfying experience despite some shortcomings.

One problem is that Hero’s Saga plays like most SRPGs on the market with few exceptions. It’s you and your troops versus a main rival and his/her troops in grid-based warfare, and like many genre entries, it has an incredibly steep learning curve. However, it does help separate itself from the pack with things like a unique class system. Instead of a traditional class system where class changes with the character‘s level, here, characters change class with their weapons. I don’t recall seeing this before, and it actually works pretty well. There’s also an item trading feature available if you know anyone else who has the game. Beyond that, the gameplay is very DS-centric, which helps the game feel like something optimized for the platform. Battles begin on the bottom screen, where a bare minimum of characters are shown until you select whether to attack or defend, at which point the gameplay shifts to the top screen where a more-detailed viewpoint of the combat is shown. With it, you’re able to see each troop one side at a time and plan accordingly. If your main rival has a lot of underlings, you can choose to either attack them first and hope to wipe them out – thus allowing you to focus on the leader, or focus on the leader and hope that the secondary enemies don’t wind up doing too much damage. 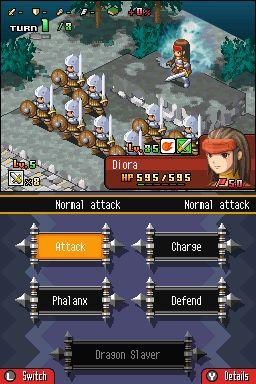 At that point, the bottom screen is used to select whether you’d like to attack, how you’d like to attack, if you’d like to defend, and so on. This can be done with either the d-pad or the stylus, and works pretty well from a functional standpoint, as it is easier to select the options on the larger menu screen, but the shift from top to bottom-screen combat is pretty jarring, especially given the change in detail levels. I also found that using the d-pad instead of the stylus took less time, so the touch screen usage was logical, but still not quite ideal.

Hero’s Saga’s plot is perfectly acceptable fare, but isn’t terribly compelling. The hero Ernesto is given an incredibly powerful sword that is part of the highly sought after Vaettir Arms. Now, he must join together with allies to stop the evil Empire from getting his sword and conquering his nation. The storyline, like most SRPGs, is largely forgettable. That’s been one major drawback to these games – the focus is on the gameplay and the stories wind up being secondary unless they’re huge releases like the original Final Fantasy Tactics, or are so over the top that they can’t help but be memorable like Disgaea.

Graphically, Hero’s Saga is pretty impressive given its genre and system. While the bottom screen combat looks like a GBA-level SPRG, it becomes much sharper-looking when things go to the top screen. Everything just flat out looks better – the environments have depth, you can actually see facial expressions and the intricacies of each designs – including being able to tell each individual part of a character’s armor or clothing. The only negative to the graphics here is that the animation isn’t all that detailed. The top screen is also used to completely show whatever storyline is being told with full-screen art that is quite gorgeous. This is another element that takes advantage of the two screen format because in a normal SPRG, a lot of this art would likely be covered up by text – hurting the player’s ability to enjoy the art.

Hero’s Saga’s musical score is stirring, but not altogether memorable. The tunes all fit the medieval theme of the game, but don’t stand out much. They are, however, good songs in their own right – just don’t expect to have much of a desire to listen to them after playing the game. The sound effect work is fine – everything sounds correct, nothing seems out of place, but they, like the music, aren’t exceptional. 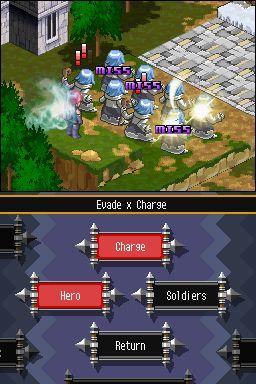 While it’s a little rough around the edges and the characters and plot aren’t too intriguing, Hero’s Saga is a well-made SRPG. Long-time fans of the genre yearning for a new game to add to their collection will enjoy it, although I wouldn’t recommend it for casual SRPG fans. There’s simply nothing here I can see hooking them and the steep learning curve will certainly scare most of them away quickly.