On a system full of top-notch puzzle and platforming games, WireWay stands out with a unique premise that combines the two genres beautifully. Your goal is to lead Wiley, an alien, out to harvest stars throughout the galaxy by crossing a stage’s finish line with as many stars as possible. To get them, he must fly around stages by basically acting as an arrow on a bow and arrow. You pull down on metallic wires or bars with the stylus, then adjust his trajectory to send him flying onto either other wires or onto bumper balls that will continue his flight. 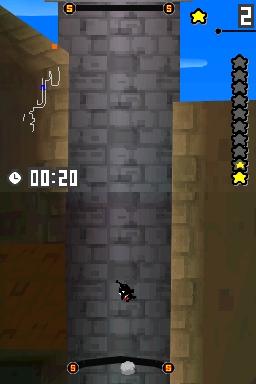 That part of the controls works really well, as the playing area is seen over screens, with the bottom screen being used to control the character. You can see the area directly above the bottom screen that isn’t visible on the top screen by using the d-pad or face buttons, which leads to its own set of problems. No matter how well you try and adjust the viewing area, there are times when you simply can’t get a good view of where you need to go next. This results in a lot of aimless flight and frustration, and really kills the flow of the game.

This isn’t much of a problem in the story mode or the “strategery“ challenge modes since they don’t limit the amount of “flicks” from wires, but it becomes a major issue in the “flick trials” challenges, as they do place limits on you. Aside from that problem, the gameplay is very addictive – it’s especially fun to beat a stage, then retry it and either improve your grade or in the case of the trials challenges, complete a level with fewer and fewer flicks. Trial and error is a huge part of the gameplay, but it ends up working in the game’s favor whenever it isn’t caused by the problematic viewing issues. 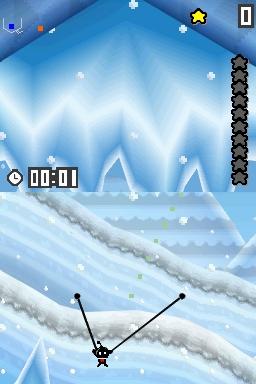 WireWay is a nice-looking game overall. The foreground graphics, mainly the wires, bumpers and characters have a very simple, sharp look to them, but not overly-simplistic. This works well at making them stand out against the intricately-detailed backgrounds and levels. Musically, there’s nothing particularly memorable about the game, as its soundtrack is full of wacky background music that fits the game well enough, but it isn’t memorable.

Despite its gameplay and audio flaws, WireWay manages to deliver a satisfying experience that should please anyone who likes either platformers or puzzle games – more-so the latter, as the platforming element is secondary to puzzle-solving.