Anyone who has talked to me for more than a minute knows of my undying love for the Neo Geo Pocket Color. Released in 1999, the NGPC boasted near-perfect ports of many MVS arcade classics as well as impressive new IPs such as Biomotor Unitron and Cardfighters Clash. Unfortunately, SNK went bankrupt within months and production of consoles and games were halted. SNK was resurrected some years later as SNK Playmore, but the Neo Geo brand never really resurfaced.

Famicom Plaza is reporting there’s after 13 long years, there’s finally a new Neo Geo Pocket. Although apparently just licensed from SNK, this new device carries both the SNK and Neo Geo logos and is clearly influenced by the design of both the NGPC and the AVS. Boasting a 4.3inch screen and 2GB of internal memory, the device includes 20 classic pre-loaded Neo Geo AVS/MVS classics including:

Hopefully this will be a be a full blown handheld console and not just a one-off device like the Plug n’ Play Genesis and Atari Control Pads (which can only play the games they’re pre-loaded with). No pricing or purchasing options have been announced yet, but as long as the analog stick is similar to the NGPC’s — and it does look that way — you can sign me up. 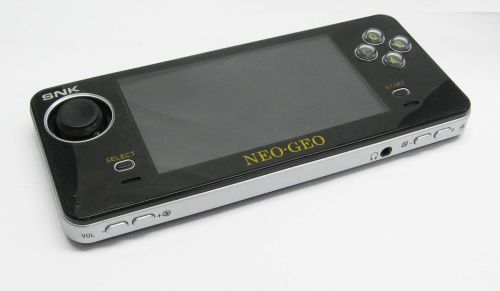