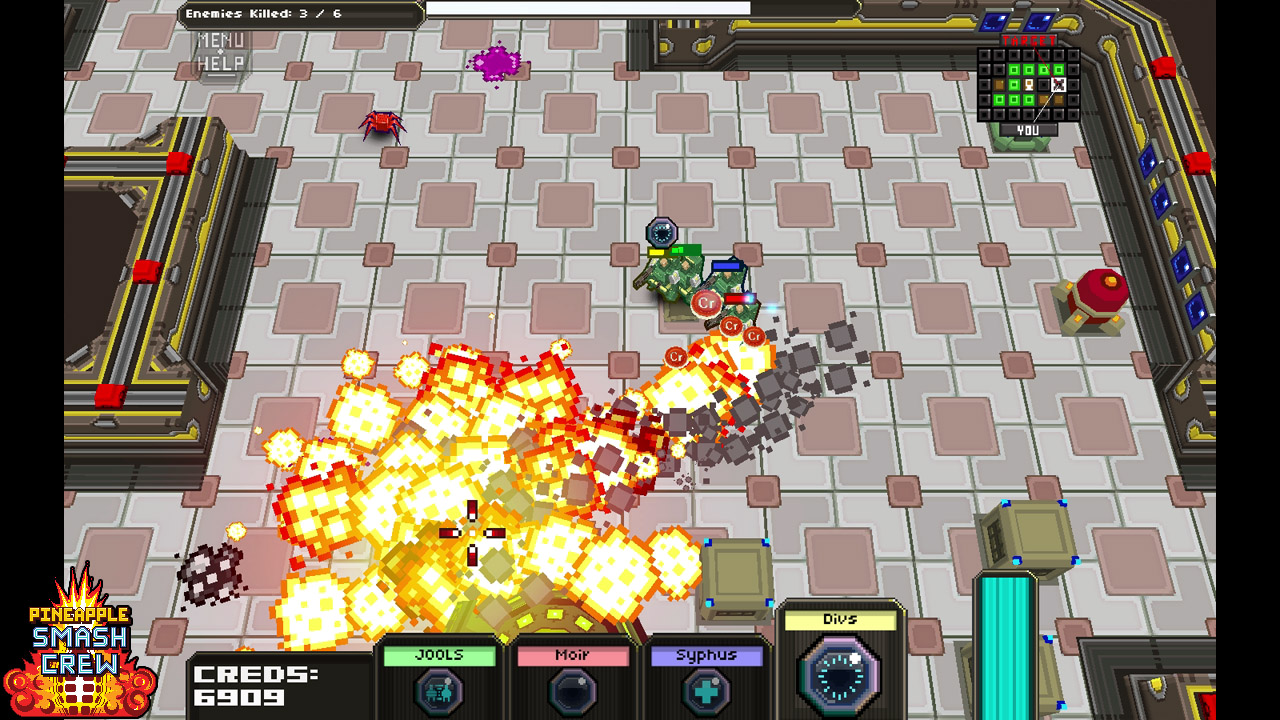 Sometimes it’s good to be simple. Sometimes all you want to do it lay waste to the aliens and robots that have overrun a spaceship with a four-man crew who work together like a well-oiled machine, concentrating massive firepower at anything dumb enough to get in the way. While careful loadout management and correct attribution of skill points into the most effective perks are certainly fun, there’s also something to be said for letting a grenade do all the heavy thinking. In Pineapple Smash Crew, the hardest choice is which grenade to use to complement your guns.

Pineapple Smash Crew is a four-man group of space marine-type soldiers blasting their way through the ruined hulks of creature-infested space ships. While the primary goal is a throwaway task (kill all monsters in a room, find the relics, or destroy toxic barrels), the secondary goal is to get to the computer room and download the info necessary to eventually find the big gold spaceship. Both of these are just a cheap excuse to plow through endless random rooms filled with alien bugs and bots. Pineapple Smash Crew is pure arcade shooting from beginning to end, and complicated mission structures aren’t part of that formula. 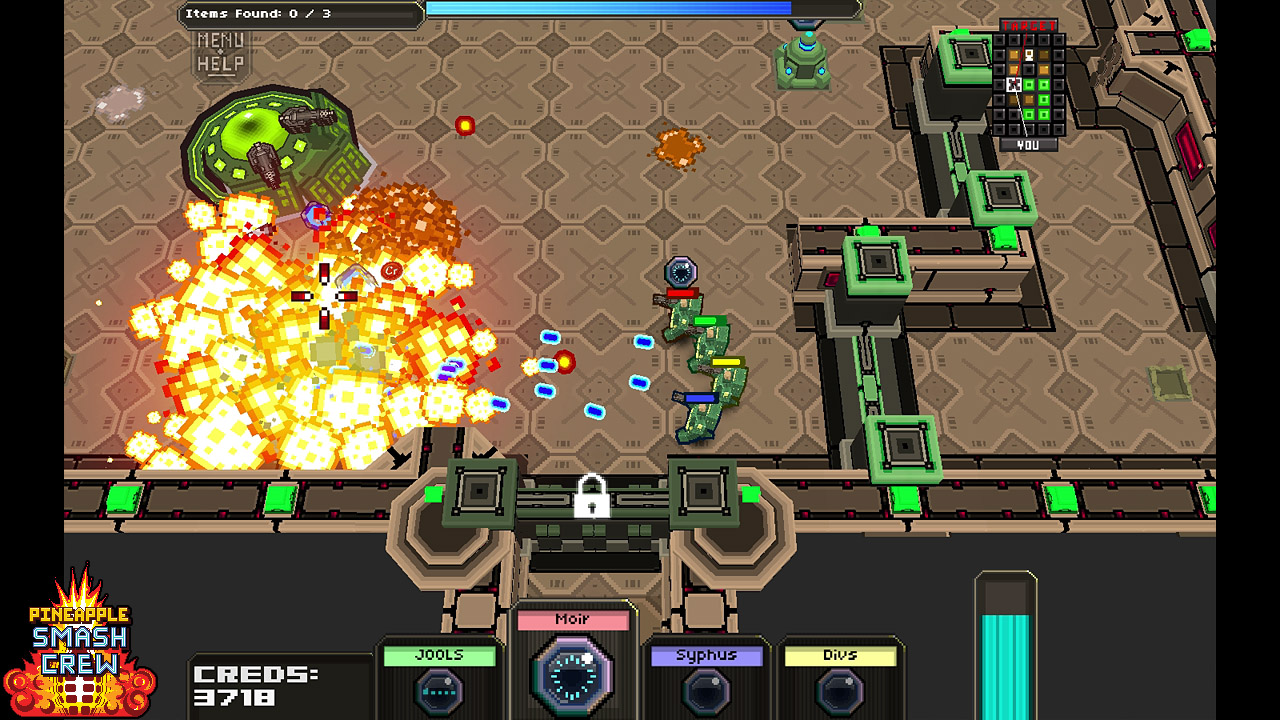 So, with enemy smushing being the order of the day, there’d better be some top-notch shooting going on, and Pineapple Smash Crew does a pretty good job of it. Your team sticks together and acts as a single unit, concentrating firepower on a single point. If a member gets left behind by being stuck on a wall or behind a door, he quickly teleports back into the fight, so there’s no fiddling around trying to keep the guys together. Each team member has his own individual health bar, and can carry a single grenade, and you can switch between them with the touch of a button to get the right member for the job up front.

The primary reason for switching the lead is grenade selection. There’s lots of explosives left behind as you destroy everything in your path, and the higher the team level the greater variety available. The initial grenade and rocket are quickly joined by more creative options, such as turrets, decoys, wall-piercing lasers, and much more. Whether it’s getting the timing just right with the standard grenade’s explosion or placing a pain-field so that its circle of damage bleeds through the wall to take out the unknown enemies on the other side, there are a good number of very satisfying ways to shoot, explode, or incinerate the biomechanical alien menace. 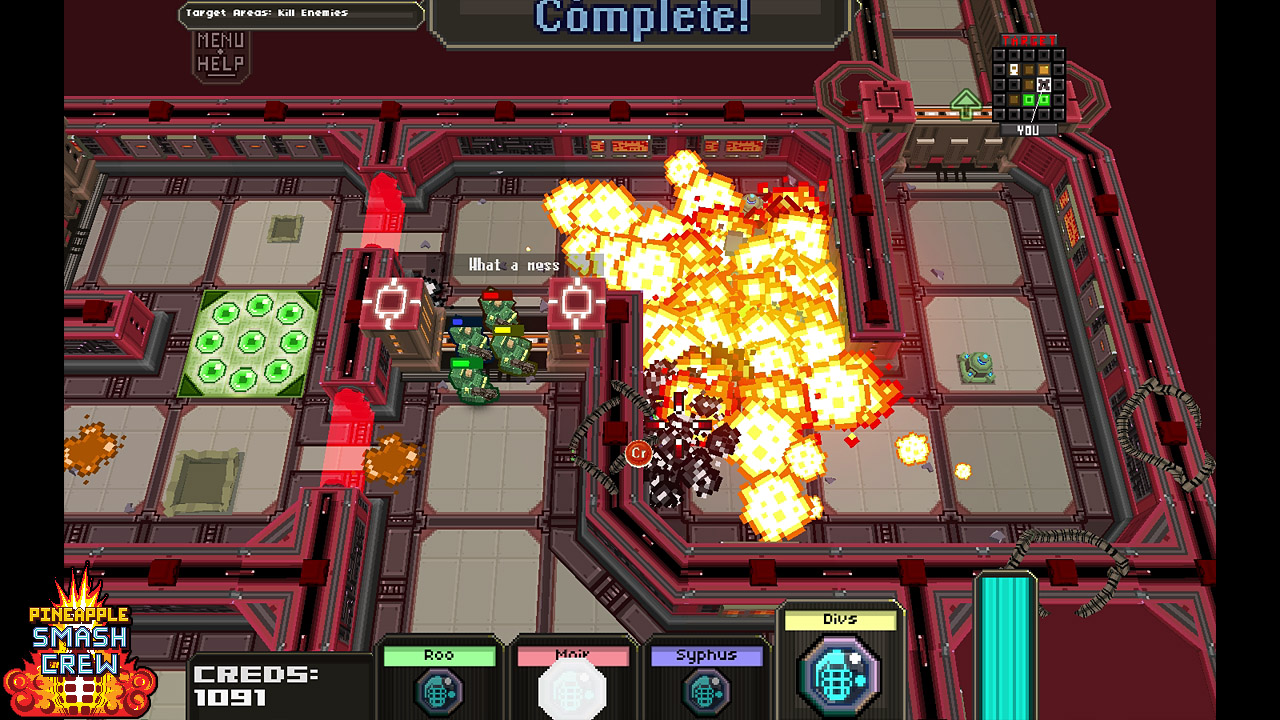 While that can be a lot of fun, though, after a while it begins to feel very same-y. As the ships get bigger they all start seeming the same, with very little to differentiate one area from another. The randomly generated rooms have a limited number of overall styles, with some being mazes and others more open. Space ships range from small to gargantuan, but the mini-map in the corner lets you know exactly where the goal and computer rooms are, so once you’ve maxed out the level on your crew there’s no reason to explore. There are some very funny details in the ship logs in the computer room, but that’s the only place the strong personality of the game really shines. Finally, Pineapple Smash Crew isn’t a very difficult game, so after a while it becomes entertainingly mindless and little else. 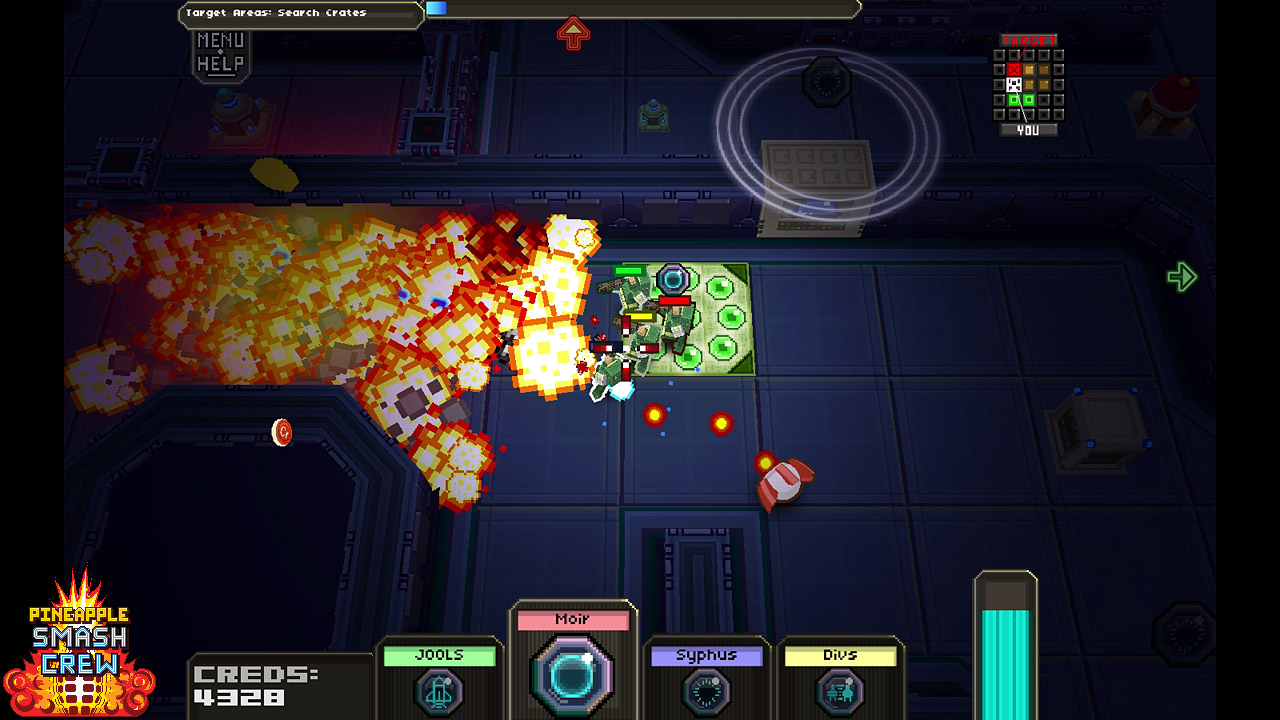 Pineapple Smash Crew is, unquestionably, an entertaining game. There’s good, solid shooty action at its heart, and reading the logs about its universe’s history makes me want to see more of it than the repetitious inside of its ships. It’s possible an update or two might add that one missing feature nudging it into “Awesome!” territory, but at the moment Pineapple Smash Crew is a little too much vanilla, not quite enough chocolate chip.