It would seem the sales pitch for Skullgirls is pretty straight forward: insane combat with well deformed woman. There’s a little more to it than just that, though, such as some of the most stunning 2D artwork you will see in a video game with fluid animations, but what I took away from my hours of play with Skullgirls is that this is a completely loony and frantic fighting game that continually had me coming back for more. Is the wildness of Skullgirls enough to win over the fighting game community?

As mentioned before, the entire cast is made up of female characters, each one with a strange deformation that makes them unique. For example, Ms. Fortune somehow is able to dismember herself, while someone like Filia has parasitic hair for an ally. The characters in this game are absolutely crazy in the best way possible. There’s no fighting games with characters who share the same traits as the women in Skullgirls and their design certainly adds a twist to how the game is played. Unfortunately, there are only eight characters to choose from, which is a bit of a bummer considering most fighting games today feature rosters upwards of 60. To be fair, this isn’t exactly a full retail game and  the eight characters are certainly serviceable. There is a positive side to having a small roster, though. Players will be able to master their favorite characters with ease while picking up on other characters’ moves in the heat of battle — making things a bit more competitive.

Combat is pretty standard when it comes to a tag-team fighting game. You have the different variations for punches and kicks, along with supers you can perform as you build up a meter. Characters are varied so significantly that you won’t have the same experience with any two individuals. For instance, the fast and furious Ms. Fortune deals less damage while the slow and steady Painwheel deals heavy damage. You have some who are more skill-based in combos while some allow you to just button mash to get around. Owning an arcade stick will help immensely. 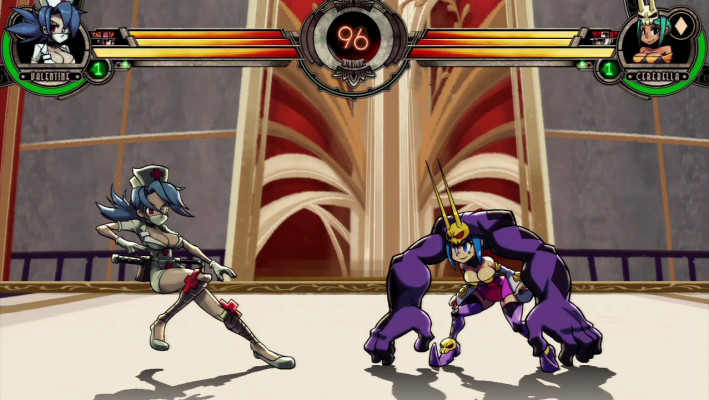 Skill is definitely required to progress through the game. No matter what difficulty you choose when playing offline, you will find that enemies tend to eradicate you if you don’t know how to properly block or put together sick combos. Packed in with fantastic fighting mechanics are three basic gameplay modes: arcade, story and online. Arcade lacks much depth or insight and feels completely random. Who you face and how many are in the opposing force’s party is up in the air. You don’t even get a ladder to climb; just go and fight until they say stop. Story mode, while starting off intriguingly, falls short and feels empty. While most fighting games don’t necessarily come with high profile storytelling mechanics, it feels a bit tacked on with Skullgirls. It definitely doesn’t help that the dialogue and events feel short and meaningless.

I’m not sure if this is specific to me, but I had some serious issues with the online play. GGPO is supported and is supposed to create a connection with close to no latency between players yet the majority of the matches I fought online had some serious issues with lag. Even switching up the different regions and tinkering with my modem didn’t help. While I’m not sure if this a common problem,  others have had this issue as well. My time with the game was seriously hampered by this experience.

I don’t tend to linger on visuals unless they are groundbreaking or a key component in the game, but Skullgirls bears mentioning. The 2D artwork in this game is absolutely gorgeous. This is by far the best 2D hand-drawn artwork seen in a fighting game, complimented by fluid and natural animations. Everything here has a distinct look from the dirty streets of the city to the 1930s cartoon style of Peacock. It is a strikingly beautiful game that would do well framed on a wall somewhere.

Closing Comments:
Skullgirls is something to adore with its beautifully hand drawn animations and fluid gameplay dynamics. Sadly, it is a bit light on content, even for a $15 game, and the lack of proper move lists is depressing. When games have gotten to a point where they instruct you to go to a website to download an external PDF file filled with the different techniques for a character, you know something has gone horribly wrong. Regardless, you can tell the combat is designed by avid fighting fans and has tournament level terminology. Although Skullgirls could have been more robust, what is here is great enough for fighting fans to swiftly adopt it into their hearts.