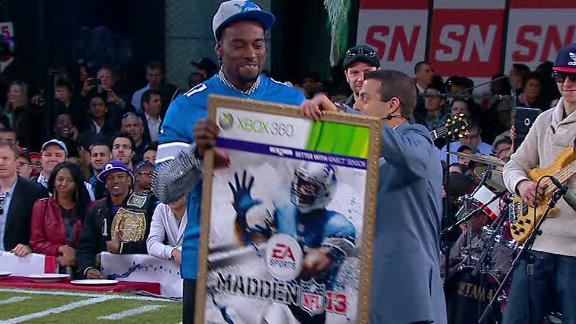 Who would have thought? Megatron is taking the cover of Madden 13! Sports fans everywhere told Cam Newton to go kick rocks. Or did they? It seems like the cover might just be an elaborate game of hot potato.

The Madden cover used to be an honor, but there are several reports of fans voting against their player in hopes to avoid the curse. Green Bay Packers Quarterback Aaron Rodgers tweeted, “Thanks to all our packer fans that voted for and against me in the madden voting! Happy Wednesday! #Curseavoided.” This was one of the reasons why Rodgers lost to Megatron in the first place.

How can anyone know if Calvin Johnson really won by popular vote? True, Calvin Johnson fans would never take this victory away from him. Johnson deserves a little fanfare after all his contributions to a Detroit team that struggled for years to find a superstar leader, on the field and in the press.

Anyone wondering what comes along with a Madden cover? If the curse comes with it, Johnson was already well compensated. He just finished an eight-year deal worth up to $132 million last month with the Detroit Lions. For those keeping score, his deal surpassed the monster Fitzgerald deal with Arizona, where Fitz was signed on for an 8 year/$120 million contract (with $10 million more guaranteed than Fitz). Who cares after a cool hundred million, right?

Hardcore Gamer would like to say congratulations to Calvin Johnson on his Madden 2013 cover. Welcome to the special in-game world of invisible stats and heightened levels of ball handling skills. I’m sure you’re going to anger players the world over by digitally doing what you do best: catching things through the bodies of 2+ defenders.