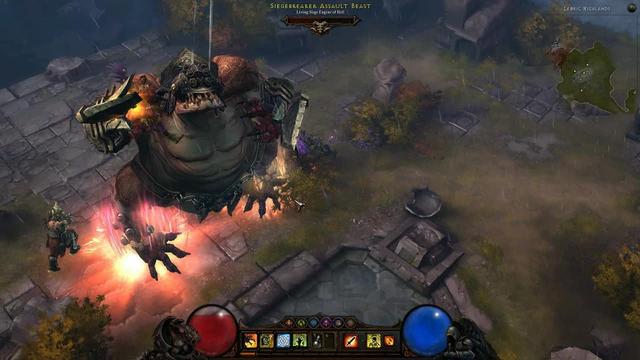 It’s finally here! Diablo III is the first entry in the franchise in nearly twelve years. Blizzard Entertainment announced Diablo III in 2008 and four years later, it’s ready. There are some sweet new features and more carnage than any of the previous games.

Character classes have changed. Barbarians reappear with upgraded abilities such as crushing opponents upon landing and barbarian fury, allowing them to break through an opponent’s ability. Wizards are a reincarnation of the sorcerer and sorceress classes from the past; they still have the powers of fire, ice and lightning. The Witch Doctor, who is similar to the necromancer in Diablo II, can summon monsters and use poisons on enemies. Monks are primarily melee attackers who deal crushing blows and can block projectiles. Demon Hunters attack with crossbows and use hatred to fuel offense while using discipline to power up defense. There is also a new character named Leahit  who will help you during certain quests. The video below shows a frightened Leah and gigantic monsters, it was used as a commercial for television.

Last summer Blizzard even announced an in-game auction house. Players can trade gold and items using the auction house’s system or spend real money to buy and sell items in the game. Blizzard has kept the hardcore mode for more intense players. Once your character is killed in this setting there’s no coming back, so be careful.

Diablo III is being released in North America on May 15th. Own a copy as soon as possible to unlock more secrets. Destroy all evil and save Sanctuary.