Zombies aren’t slowing down anytime soon. A big part of the multi-billion dollar industry is The Walking Dead, a graphic novel turned franchise at its prime, spawning an award-nominated television show and now a video game from a pronounced developer. Taking influence from the episodic model of comics and television series, Telltale Games seems like the perfect match to bring a new piece of fiction to The Walking Dead universe. But how well can smashing the brains in of the undead transition to an adventure-style game?

If you’re familiar with the comics or the TV show, you know that the story doesn’t necessarily start right at the beginning of the zombie outbreak. Episode 1: A New Day, on the other hand, starts close to the outset as things are starting to unravel and people are still confused of what is going on. It’s very interesting to see the early stages of The Walking Dead franchise, playing almost as a prologue to the events you know and love.

The game starts off as the main character, Lee Everett, is being transported to a prison for a crime that he may or may not have committed. The storytelling in episode one is phenomenal. It has some emotional and hard hitting dialogue that doesn’t leave much for filler. Everything said progresses the story; there is no stopping and crying over a random death or talking about someone irrelevant to the plot at hand. Previous events are brought up only if they lend gravity to the story. Everett is here and now; he doesn’t worry about the past, instead looking to the future and how to survive. Telltale is known for their writing and storytelling but they have bested themselves by offering an immersive and frantic episode. 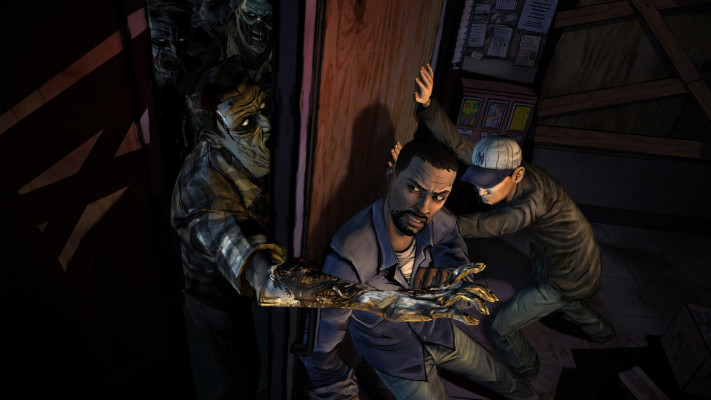 While only the beginning, the first episode shines a positive light on what we can expect in the future. The gameplay is simple; you observe the environment around you and try to piece together how to finish the puzzle of staying alive. You need to find a key item but it’s never as easy as being laid out for you. There are multiple layers to each puzzle, forcing you to progress through the story in order to solve them. It’s a well crafted system but I do wish some of the choices could have been optional or played out in a different way as there are people I didn’t feel the need to help, but I suppose it will play out in the story. Based on how good your adventure skills are, it can take anywhere between two and three hours to complete.

Like a true Telltale game, your actions are limited.  This is an adventure game, guiding you through different scenarios where your choices will impact what will happen in the story. Talking to a survivor and answering their questions in a certain manner will fill an invisible bar representing how they perceive you and with that, people will treat you differently. There is even an Alpha Protocol style conversation timer that runs down at a certain speed based on the events at hand. It’s a suspenseful aspect that makes you choose a path in the moment with little time to react. I even found myself making choices I didn’t want because there wasn’t time to really consider the outcomes — much like life. You will also make difficult choices that can affect who lives and who dies, essentially shaping the forward progress of the game. It makes you feel like you’re Lee Everett and you’re in this horrible world where you either make sacrifices or do the right thing.

The biggest problem with A New Day is that there are very few impactful choices. While there is a bit of an illusion that you are shaping the world around you, there was only one choice that I felt effected the plot in a significant manner. Watching the nicely put together preview of the next episode, you can tell what you said in this game will be brought up, but most of the choices you’d consider usually play out the same way with slightly different pieces of dialogue. You’re not going to see massive changes, but there’s always a chance it will all mold together in the future iterations.

The visuals make Telltale’s The Walking Dead even more special. The developer has always shown to have some fascinating art behind their games, but the work they put into this is absolutely gorgeous as it blends incredibly well with the graphic novels. At times it feels as if you are watching a pastel painting coming to life as the texture work is something to admire. There’s also a strong variety of locations you will stumble upon, offering colorful and gritty settings to run from those nasty zombies. Without the artwork put behind the game, this would just be your run of the mill Telltale adventure game; with the artwork, it’s a truly immersive experience that does well in the fiction. 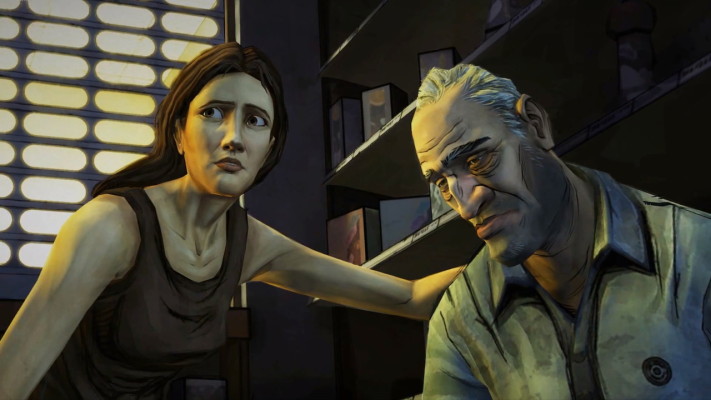 Telltale has truly outdone themselves. If the first episode of The Walking Dead is indicative of what we can expect from the entire season, this could end up being one of the best zombie games to date. While not without faults, it’s an incredibly enjoyable experience that any fan of the comic or television show will enjoy and should play. The Walking Dead Episode 1 is well worth investigating.