Even though Facebook has hundreds of thousands of games available, it’s tough finding quality entertainment. One game that stood out in the see of invites was Dreamland. Developed by FreshPlanet, Dreamland uses a board game design to enhance the RPG style. Begin by choosing between a young, pajama-clad boy or girl as an avatar. You’ll then receive a visit from a white fox asking to help save his world from being invaded by evil creatures. The only time you can fight them is when you go to sleep. Enter Dreamland to defeat nightmares that have crept their way through.

The concept is creative and gameplay isn’t complex. Movements and attacks are decided by rolling a die. The higher the roll, the more damage dealt and board spaces covered. The playing area is filled with items, enemies, shops and a few traps. Items such as health, bravery, pep and money are viewable. Bravery allows you to re-roll die in battle, as well as add extra damage. Pep gives you one or more less spaces to move.

Other helpful items are hidden inside gift boxes. Land on the space and you get to open the mystery presents. I have found an effective strategy is to travel the board collecting items and money before getting into battles. With the fortune you amass, much needed upgrades can be purchased to turn fights in your favor. There are hammers to add offense and articles of clothing for defense. Once necessary equipment is gathered, you can become an unstoppable force; a nightmare to nightmares.

There is an army of imaginative creeps, ghouls and imagination figments. Scary ideas from superstitions, mythology and reality have been animated. While there’s your standard black cats and under-the-bed monsters, more unconventional creeps appear, such as schoolyard bullies — truly a nightmare.

When engaged in battle, the outcome relies heavily on the dice, but there’s a few tricks to gaining the upper hand. One that has helped me is having friends who play the game (sorry, loners). Players from your friends list can jump in and attack, as well as take a hit for you. Pretty smart move by FreshPlanet and Facebook to gain new users. RPG elements occur after making it out of a level. After earning points based on performance, decorations and furniture can be purchased for your bedroom. Some beds or nightlights give you extra health or defense.  Friends can visit your bedroom to earn some hearts.

Considering this is a Facebook game, animation and sound effects are average . Levels have a dozen or so different areas — some of which can only be unlocked by adding friends, which can be annoying. Enemies are often recycled, using the same image with different names. It’s safe to say Dreamland didn’t have a huge budget.

Overall, Dreamland is a simple game with great ideas. Sure it has faults, but they aren’t deterring enough to hamper the experience. After all, what more do you want from a Facebook game than something fun to play in-between surfing the web and  connecting on Facebook? 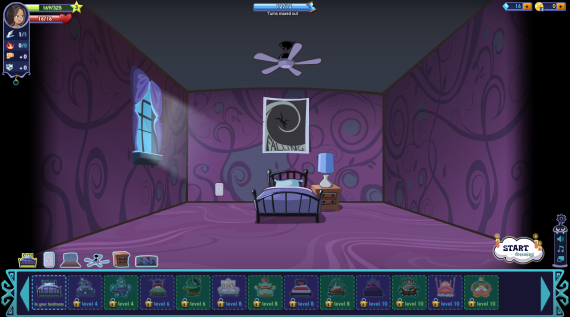