Smaller video games are slowly becoming the more artsy and unique titles of this generation, and Quantum Conundrum is right there with them. What comes to mind when you think of physics-based puzzles mixed in with first-person platforming? Chances are your answer is Portal, and the comparison here is unavoidable. Kim Swift, lead designer of the first Portal, and Airtight Games have brought their cartoonish charm to this new and inventive title, but will charm be enough to stand out in the crowded industry?

Quantum Conundrum is a puzzle game and a good one at that. The puzzles are incredibly creative and require an exponential amount of thought when you get to the later levels. Like any good puzzler, the level of difficulty increases as you progress, and you’re never thrown into something you’re not prepared for. That isn’t to say there’s a whole lot of handholding, but it’s your job to actually learn what is presented to you and apply it to different situations. It’s brains over brawn as if you don’t learn, you don’t move forward; it’s as easy as that. 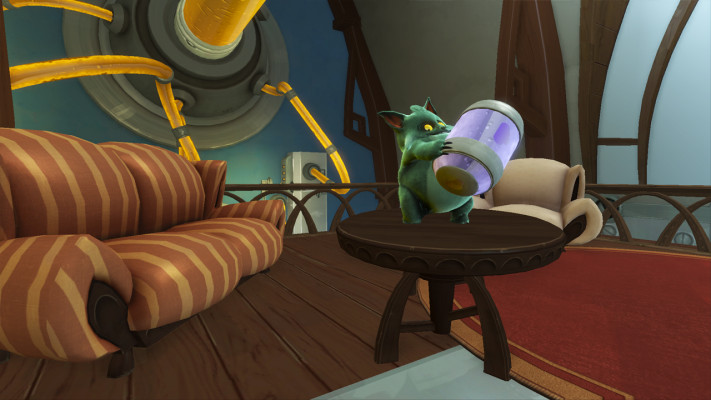 The game is broken up into three different areas and as you progress, you will be granted different abilities. Each room serves as another puzzle, and linking together are a set of hallways that do become repetitive after awhile. Thankfully, specific hallways are filled with dialogue triggers, ensuring players aren’t bored on the way to puzzles. It’s disappointing that each level is so strict about what power you’re able to use as it would’ve been fun to see how you can break the game, but each level is well crafted and requires tight precision, so you wouldn’t want to spit on the efforts the developers. The gameplay itself consists of solving physics-based puzzles while platforming in a first-person perspective. By using the different powers, you’re able to accomplish feats no man would normally be able to do. Some of the platforming can be tedious and occasionally causes frustration, requiring high precision and timing, but getting through it is an reward in itself.

The story is pretty simple. While visiting your whack-o mad scientist uncle, an experiment goes horribly wrong. During the ensuing madness, you obtain the world-shifting Interdimensional Shift Device (ISD). Somehow, you are able to rotate through different dimensions and manipulate the world around you. There are four different dimensions to rotate through, which include slow-motion, steelworks, fluffy-light and reverse gravity, and each one is used to a degree that most people would have never thought of. Each power will be tested and eventually all four will be put to use in a confusing, but thought provoking, manner. It’s a very rewarding feeling when you complete a puzzle that you’ve worked so hard on and put so much time into accomplishing. 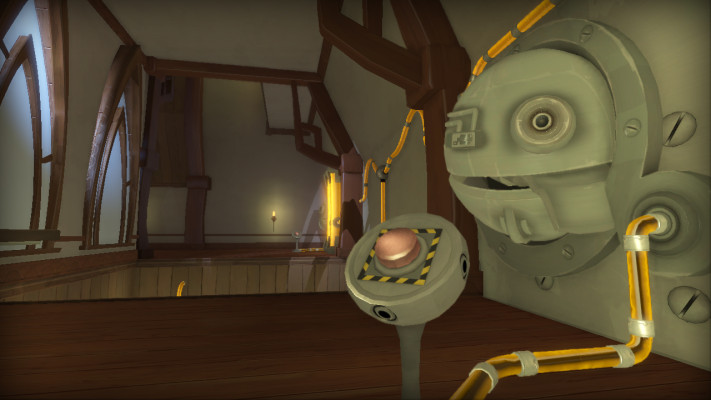 While there’s little story, we are given incredibly charming and cheeky dialogue from the uncle. If this were Portal, he would serve as the GLaDOS or Wheatley of the tale, giving you history on the household and constantly cracking wise. The dialogue is well written and, while not necessarily laugh-out-loud, will have you constantly breaking a smile over its witty humor. It’s too bad most of the dialogue is easy to miss as they are placed in between rooms where the uncle will react to what you look at. For the first hour or so, I found myself simply rushing from chamber to chamber without realizing that dialogue was passing me by. Who wouldn’t want to know about the horrible genetic line that occurs to the uncle’s pet cat after so many failed cloning attempts?

It’s somewhat surprising to see Quantum Conundrum end up on PC first, as there’s a surprisingly lackluster amount of graphical options at your disposal. Usually PC gamers are treated to a multitude of sliders such as anti-aliasing, textures, post processing, etc., but all we get here is the ability to jack up the resolution to 1080p. It’s a shame considering the game looks fantastic, offering bright and lively fiction that has the imagining of a Pixar film. The strong comical artwork blends well with the humor of the game, and it definitely helps objects pop out to create a unique setting for you to venture through.

Closing Comments:
Quantum Conundrum is an inspirational game filled with life and joy. It’s a lengthy experience filled to the brim with thoughtful and creative puzzles to solve. The game will run most players 5-8 hours, but hardcore players can replay levels in order to beat the par time or just wrangle up all the collectables scattered across the house. While some of the platforming can be a bit rough at times and it lacks graphical options, it’s still an eventful and enjoyable experience that will leave you with a smile across your face.