Johnny Kung-Fu hits the eShop with a fun premise (and some punches, kicks, and hammers as well). Johnny’s gal Paula  has been taken by some bad dudes led by Mr. Wang, and your job is to be a bad enough dude to save her. Doing so will require you to partake in some bite-sized beat ’em up action, some Tiger Electronics LCD-style platforming, simplistic Game & Watch-style stages and even some boss battles. Every stage is short, which might make the game seem like a brief experience in theory, but there’s a catch. You only have an hour of in-game time to save her and if you need to use a continue, it eats up five minutes of your time instantly. The time limit adds a lot of tension to the game and results in the player trying to find just the right balance between speeding through and making as few mistakes as possible to avoid having to replay the game over and over.

For a mini-game collection-style game, there isn’t a ton of variety here, but what’s here is well-executed. The Tiger-style games involve jumping out a bomb’s path, then slugging a goon or two before pulling a level to open an elevator. However, to get to the elevator, you need to avoid being electrocuted by paying close attention to the pattern of the electrical strip thingy. The single-frame animations are a welcome throwback, but the Tiger games weren’t exactly fun to play in their heyday, and this accurate recreation of them is hurt by the limitations of what they’re paying homage to. However, the Game & Watch style game of hot potato with bombs is a lot of fun, and features far more elaborate animation than the Tiger games since it actually has some, also has a really fast pace to it and controls perfectly. 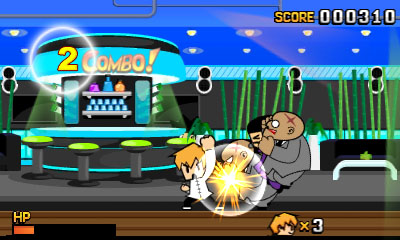 The most in-depth stages are definitely the beat ’em ups that make you beat X amount of people. They allow you to do a few attacks, and shift from the foreground to the background to more efficiently kick ass. Boss battles follow that same formula, only you face the boss after defeating a bunch of folks. I had the most fun with these stages in part due to the wacky enemies you face, like a group of suited thugs who turn super saiyin at a moment’s notice. There’s also a funny original Game Boy-styled hammer bonking mini-game where you face off with someone and whoever gets the highest number gets to bonk the other one with a hammer is fun, and one of the more stressful mini-games since it alternates between real-time and a sped-up time. The mini-games are mostly enjoyable, but there just aren’t that many of them and within a few minutes, you’ll encounter repeats of the same concept only a bit harder.

Johnny Kung Fu is also hurt by its grating soundtrack. It’s a repetitive homage to the 8-bit era and not a very good one at that. Super Mario Bros. didn’t exactly have a lot of music, but it was all good stuff you didn’t mind hearing again. The music here is tolerable exactly once, then you get pretty tired of it. I do love what they tried to do with the visuals though. While you’re not going to get the best-looking game available on the eShop, what you will get is one that perfectly replicates the graphical styles they’re paying homage to. Sure, the old Tiger LCDs haven’t aged well visually, but seeing that one frame movement with a big black outline of a character did make me chuckle, and that’s clearly what they were going for here. 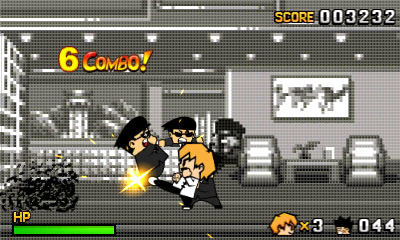 Johnny Kung-Fu offers up some fun times if you grew up with either Game & Watch, Tiger Electronics LCDs, or enjoyed beat ’em ups as a kid. It’s an enjoyable nostalgia trip that doesn’t have much depth or variety, but is worth spending a few bucks on if you’re on a nostalgia kick.  The developers clearly wanted to pay homage to gaming’s history, which is fine, but other games, like Retro Game Challenge, do it better than this and give you way more gameplay variety. However, as far as eShop games go, you can do a lot worse than this.