Beginning its life three years ago as True Crime, the wait for Sleeping Dogs has been excruciating. Square Enix has done the unthinkable: launched a new franchise from the ashes of a canceled one. With so many open-world franchises dominating the shelves, it takes a quality game to compete at the same level. With Sleeping Dogs, Square Enix and United Front Games have created just that.

The game begins with Wei Shen, main character and protagonist, sprinting in an intense footrace; jumping over obstacles, leaping through windows, and crashing through a roof. It’s about as flawless as a tutorial can get, with acrobatics that give Faith a run for her money.

After getting captured by Hong Kong police, Wei is taken into a secure holding cell. It is then revealed he is really an undercover agent. With a sordid past, Wei uses old Hong Kong connections to slowly infiltrate Sun On Yee: the largest crime syndicate in the city. Jackie Ma, one of Wei’s oldest friends, is a lighthearted thug who blindly follows Wei into the depths of the Sun On Yee crime world. Throughout the story, Wei constantly struggles with his identity, and his loyalty teeters between his Sun On Yee brotherhood and his Hong Kong badge.

Sleeping Dogs has excellent pacing in both gameplay and story. Graphic violence is saved for climactic moments, becoming yet another successful element in the storytelling. There are seldom moments when the game forces the player into story progression. Plot missions remain solid in conjunction with the independent side missions. When plot missions become compelling enough, it seems only natural to race to the next one in order to reach a conclusion to the given portion of story. Sleeping Dogs feels like a true open-world environment without losing the momentum of storytelling.

Every mission has a Cop Score and Triad Score. New upgrades can be purchased by maxing out each level’s respective scores. Cop Score increases if Wei remains a goody two shoes: avoid destruction of public property, uphold the safety of innocent bystanders, and bust drug-peddling bad guys. Triad Score increases in spurts, depending on how destructive Wei can be. Impressively beat down or shoot up henchman for extra Triad Score points, or simply perform tasks which correlate with Triad mission objectives. 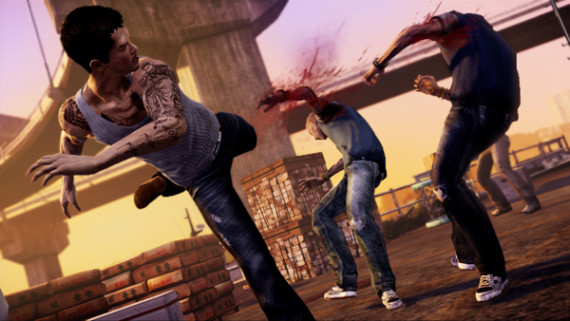 After completion, missions can be replayed to earn the maximum amount of points. Luckily, Wei can become the hardest thug and the strictest officer. Cop Score and Triad Score are not conflicting experience paths and can be earned to the fullest potential in every mission. There’s also Face Advantages which gives Wei the ability to perform certain fighting moves. Some perks, like suit wearing, are permanent increases. Wei enters into a heightened state of awareness while fighting and shooting once the Face Meter is filled. The fighting powers are automatically activated after the gauge refills. Face Levels are earned by completing side activities around town and become another reason to keep on playing.

The gameplay mechanics are introduced in digestible increments. What was most impressive was how long the player must wait before encountering firearms. Chapters pass before Wei even sees a gun and a few chapters more before he gets to wield one. It’s a daring and refreshing style, giving the player time to adapt to the equally enjoyable combat system.

The fighting system — many will compare it to RockSteady’s Arkham titles — trumps that of any other open-world shooter to date. How rare is it to play an open-world title and be as entertained by the fistfights as the firefights? That is not to say it isn’t amazing to have a gun in Wei’s hands. 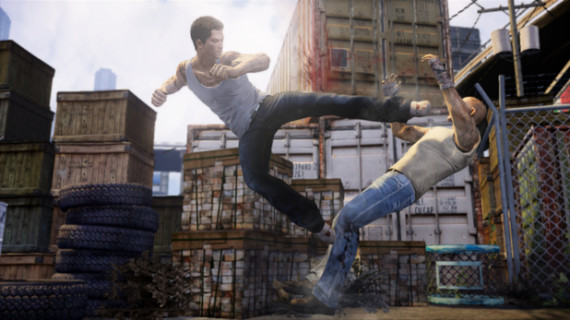 Bullet placement fluctuates within the circumference of the aiming reticle, depending on how far Wei is from the target. It’s nothing outside what was intended to simulate firing a real weapon over an extended distance. An upgrade gives Wei Shen slo-mo abilities, and it’s everything a gamer could ask for. Slo-mo can be entered while he hurdles cover, leans out a car window, or is hopped up in Face Time.

As far as weapon selection goes, Sleeping Dogs is above the traditional ‘need an arsenal to survive’ gameplay. Between the guns, fighting moves, melee weapons, and the environmental kills, it feels petty to complain about the limited firearm selection (over 10, but still lower than most current shooters). The cover system is reliable, with few instances where Wei ducks behind unintended objects. The only major issue is with fast getaways. Occasionally, Wei will enter a slow paced carjacking cinematic while he’s getting shot to death (especially bad with motorcycles).

Not all of Hong Kong is straight faced gameplay, however. Hit up the karaoke scene; control the pitch to make Wei sing each song to a mediocre degree (karaoke was still at its best when Wei was at his worst). Purchase clothing upgrades like shirts, pants, shoes, bracelets, and chains. Combine similar clothing items for bonuses to melee, experience gained, or haggling vendors. Find black market items from random paranoid citizens to upgrade Wei’s house(s). Bet on a cockfight! Find hidden offshore gambling rings. Even for those with the shortest attention spans, there is well over twenty five steady hours of gameplay jammed into the title. 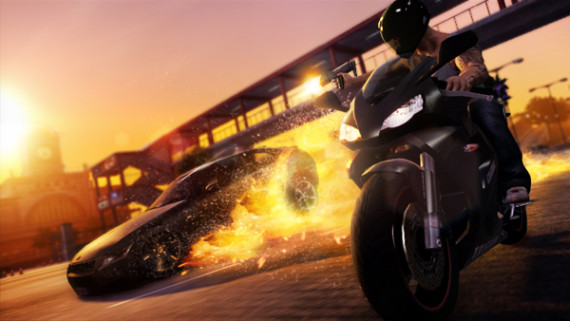 Sleeping Dogs doesn’t offer any tremendous innovations, but rather dozens of tweaks which make it a special game. Click the L3 button to cycle through current objectives and change waypoints on the HUD without having to use the big map (simple yet incredible). Clothing may have been limited to preset designs, but mix, match, and save custom outfits for later use. All the way down to the credits (where there’s a fast forward option), the game is loaded with tiny, flattering nuances.

So often in video games, character skins and outfits are recycled. The gamer has to spend a good part of their session learning the difference between two eerily similar characters. But almost every character in Sleeping Dogs has a unique appearance, and it’s a result of the motion capture of its highly animated cast. One of the most truly unique stylization in Sleeping Dogs is the high speed camera change. After Wei kicks things up above 88 mph (or something), the camera emulates a compilation of images laced together in a slightly off centered time lapse. This is probably the most distinct artistic style presented in Sleeping Dogs.

Adding substance to their otherwise atypical characters, Tom Wilkinson (Pendrew) and Emma Stone (Amanda) turn in great voice acting performances in their supporting roles. The same can easily be said for the rest of the cast. The script is great, too. Few lines fall short of their intent. The dialogue was organic. However, the real star of the game is Will Yun Lee (Wei Shen), who drives the story with a subtle prowess. The strength of Lee’s performance is one of the many highlights of Sleeping Dogs.

Sleeping Dogs isn’t a groundbreaker so much as a hodgepodge of awesomeness. It is the satisfying culmination of years of open-world gaming. With hours of replay value, smooth combat and great voice acting, Sleeping Dogs illustrates the beginning of a successful franchise. Who needs True Crime?