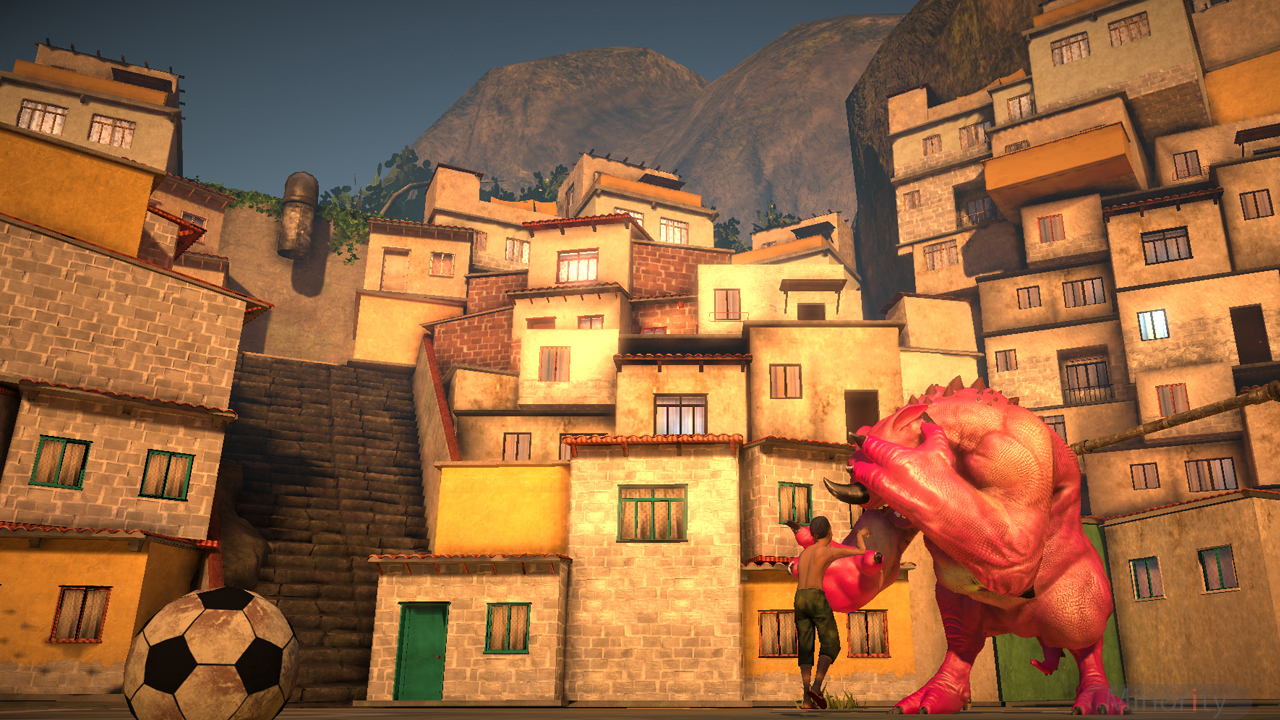 Since its first appearance, Papo & Yo looked bizarre. If anything, it looked to be a game that would get the industry talking. No one could have guessed how much of an understatement that truly was. Papo & Yo is one of those games that will be either deeply appreciated or cast aside.

The game opens with a chilling quote by Papo & Yo Creator Vander Caballero. On a black screen in white letters, it reads, “To my mother, brothers and sisters with whom I survived the monster in my father.” It then cuts to the main character Quico hiding inside a closet as a monstrous shadow lurks outside. Suddenly, the boy is thrust into the city streets and the game begins.

The depth of Papo & Yo is a pleasant surprise. Most of the story has no dialogue, yet Papo & Yo remains able to deliver brilliant parallel storylines written in well-constructed layers. During a good portion of the game, little is known about Quico’s surroundings. He ventures through the unknown portions of the city with the help of a mysterious robot lady friend named Lula and Monster.

At first glance, Monster appears to be a bumbling, harmless pal in a world filled with questions. As soon as the player becomes comfortable with Monster, however, Quico feeds him a frog that turns him into a fiery beast that savagely attacks the boy. The extremes are drastic, rendering Monster a terrifyingly unstable creature that Quico is forced to rely on in order to proceed to the next area. It’s amazing how complex a character can be that has no dialogue whatsoever.

The underlying story is about a helpless boy incapable of standing up to a monster of a man, all for reasons which unfold later in the game. The story, at face value, is a great fantasy; those looking for the depth in Papo & Yo will find a chilling, gritty tale. It’s a beautiful yet tragic story executed through impressively creative puzzles. 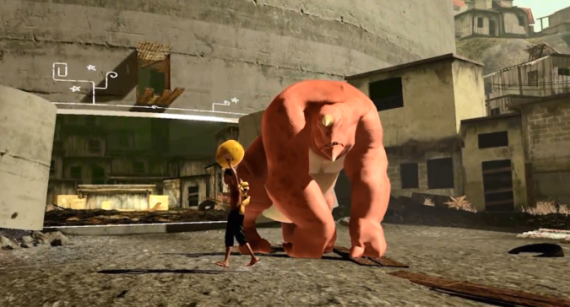 While the style of gaming (in every genre) is evolving into open-world environments, Papo & Yo is as linear as it gets. While parts of each environment are interactive, Quico cannot do much more than change what has already been laid out for him in the magical white chalk. Papo & Yo is a tale about a boy dealing with a terrible home life of which he is powerless to change, so it’s understandable if the environments were intended to support this message. Unfortunately, the game is a shining example of how a concept can fall a bit short after gameplay is introduced.

Aside from a double jump ability Quico acquires, there weren’t very many variations in actual gameplay. Quico has limited abilities, which plays perfectly into the storyline, but binds the hands of the player. This could leave many gamers expecting an action title featuring a boy, his monster, and his robot to feel disappointed. Though Papo & Yo doesn’t deliver action, the attitude of the game is not one of an action title. It never pretends to be anything more than an amazing story driven puzzle game, and it is something informed gamers should respect.

Papo & Yo is an inspired puzzle game. No one puzzle is alike, and nothing feels recycled. The entire game is a learning curve, offering new concepts during the length of the trip. Magical chalk lines manipulate the environment in countless ways: buildings hobble along on their own, magical doors open and close, and Quico can even phase scenery in and out of existence. Whenever it seems like a puzzle is headed in a particular direction, an exciting curveball is thrown. While more puzzles would have been preferable, the ingenuity of the presentation makes it a problem easy to forget.

Papo & Yo is constructed of rather drab elements; city streets, old shacks, small brick houses, and plain cliffs and valleys populate the world. Whenever the environment is manipulated by Quico or his friend, however, the city comes alive. Physics completely change: sturdy buildings become floppy walkways, walls become stairs, and even the city streets curl inward. While some may question a dull world as a design element, it serves the important purpose of emphasizing Quico’s manipulations. It’s important to remember the world is Quico’s point of view. The buildings are redundant because he feels numbed by his daily surroundings. His world is lacking, and he desperately needs an escape. It’s bold choice bolstered by intelligent storytelling.

Papo & Yo’s story is powerful and riveting. The puzzles aren’t numerous, but are highly imaginative, proving a puzzle game should never have to recycle material. With gameplay that supports the storyline, Papo & Yo refreshingly goes against the grain. Those who can accept the drab design choices will find a gripping tale with much to admire. With some of the most artistic elements of any game this year, Papo & Yo stands firmly as a title that dared to do something different; other games could learn a thing or two from its honest storytelling.