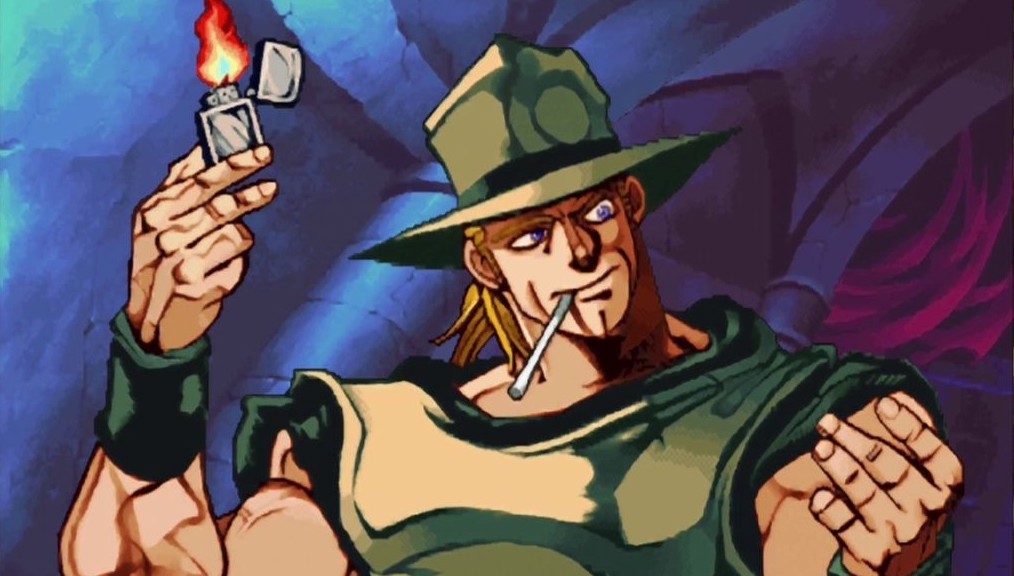 In late ’99, JoJo’s Bizarre Adventure was released for the PS1 and DC, but really felt at home on the latter system — even with an exclusive PS1 story mode– since it was more of a haven for goofy games. After a 13 year absence due to licensing issues, it’s surprisingly back on PSN and XBLA sans that story mode, but with online play for the first time and some redone visuals. JJBA HD really lives up to its name because it’s one of the weirdest fighting games you’re ever going to play. What else allows you to play as a dog, an eagle, or a scantily-clad woman who can summon cars, monsters, and buzzsaws with her crotch?

Thankfully, that answer is the same as it was in ’99 – none. The wacky roster is one thing that allows JJBA HD to age well, as does it main gameplay hook of giving most characters a “Stand” monster to fight with. All you have to do is press a button, and instead of your regular fighter, you’ll get to control a much larger monster incarnation of them. Stands do more damage, but are also easier to hit, giving you a trade-off to consider throughout the fight. You can rely on them and take your chances if you’re more of an offensive player, but defensive players may want to stick with the default character, and advanced players will switch between the two to do sweet-looking combo attacks that fill the screen. I love the variety offered by basically doubling the roster on the fly, and it allows the game to have a fast pace without being TOO fast-paced liked the Marvel vs. Capcom games.

JJBA HD expands the default roster to 22 by including all of the original’s unlockable fighters. Thanks to everyone having a strange (and diverse) moveset, there’s more of a learning curve here than with most Capcom fighters. If you’re expecting to just jump in and have your SF or MvC skills to carry over, think again. You’ll need to spend some time in the training mode to get used to everyone – and not just so you’ll know what moves to do, but to really check out the varying ranges of everyone’s Stand characters, which are the greatest variable in battle. If you don’t take the time to do that, you’ll absolutely get stomped against the CPU in story mode, while online will be even more humbling.

There aren’t a ton of options for online play – it’s fairly basic quick/custom match stuff, but I didn’t experience much lag, had some lag-free fights, and it was easy to find people to fight. There’s nothing really wrong with the online aspect of things, but it doesn’t stand out as anything special either – it’s perfectly fine and nothing more.

Visually, this is a slightly underwhelming HD release since it isn’t as extreme as Super Street Fighter 2 Turbo HD, and is more along the lines of Street Fighter 3 Third Strike with smoothed out sprites that certainly look a lot better, but aren’t going to pop off the screen as much as the former game. Still, comparing it to the original graphics (which you can play with here via the options menu), they’re a huge upgrade since they keep the same designs, don’t really alter them dramatically or scrub out the artwork’s details in the smoothing process. The animation is still fairly impressive and I’m glad they didn’t try to force a 16:9 aspect ratio for the fighting area itself, which I found annoying in MvC 2 since you couldn’t walk on areas that were visible on-screen. Instead, they used the extra space for some nice-looking character artwork  that adds a touch of class to the crazy preceedings.

Capcom fighters have been hit or miss with their soundtracks over the years. The aforementioned MvC 2’s was one of those “so bad, it’s good” ones, while the SF II series has had some tremendous music in it. JJBA HD’s soundtrack is the same as the original, which was largely forgettable then, and has remained so now. It’s not God-awful, but maybe it would be better if it was since very little is memorable about the audio outside of silly soundbytes that fit the occasionally-Engrish text fairly well.

JoJo’s Bizarre Adventure HD Ver. is a strange fighting game, but thankfully, one with a free demo available. Give it a whirl, and if you like its insane sense of humor, or loved the original game, you’ll get your $20 out of it. The redone graphics are a net positive with none of the changes hurting the presentation, even if they aren’t as extensively redone as other HD-named games, and the online play is smoother than I expected for a faster-paced fighting game. It’s hurt by having a bare-bones online setup, not including the PS1 version’s story mode, and not improving upon the blah soundtrack of the original game. There are a lot of downloadable fighters on the market now available for less money that are better than this. JJBA HD is a top-shelf bizarre game, but not exactly a top-shelf game in its own right.