Another year, another Madden. With literally no competition, it’s either Madden or gaining 200 lbs and putting on tights if you want to play NFL football. This being the case, Madden is not a hard sell. So long as EA refines the game graphically and updates the rosters, it’s a guaranteed purchase. What the makes or breaks the release critically lies squarely on the strength of newly added features. Let’s take a look at what Madden 13 brings to the table this year.

As expected, gameplay largely remains the same. Those who’ve played Madden the past five years can gloss over this section, but let’s recap for those living under a rock. After choosing one of 32 NFL teams, players control both the team’s offense and defense. As it’d be impossible to manage all eleven players at once, control shifts to whoever has the ball. Beginning as a quarterback, the ball can be handed off for a run or passed to a receiver. Receivers are marked with one of four face buttons. Simply hold down the corresponding button to throw the ball. If the pass is caught, control shifts to the receiver who must avoid defenders while running towards the goal line. There’s many variations at play such as pump fakes, audibles, spins and hurdles that also must be taken into account. It’s an easy to grasp, enjoyable formula that continues to serve the series well. 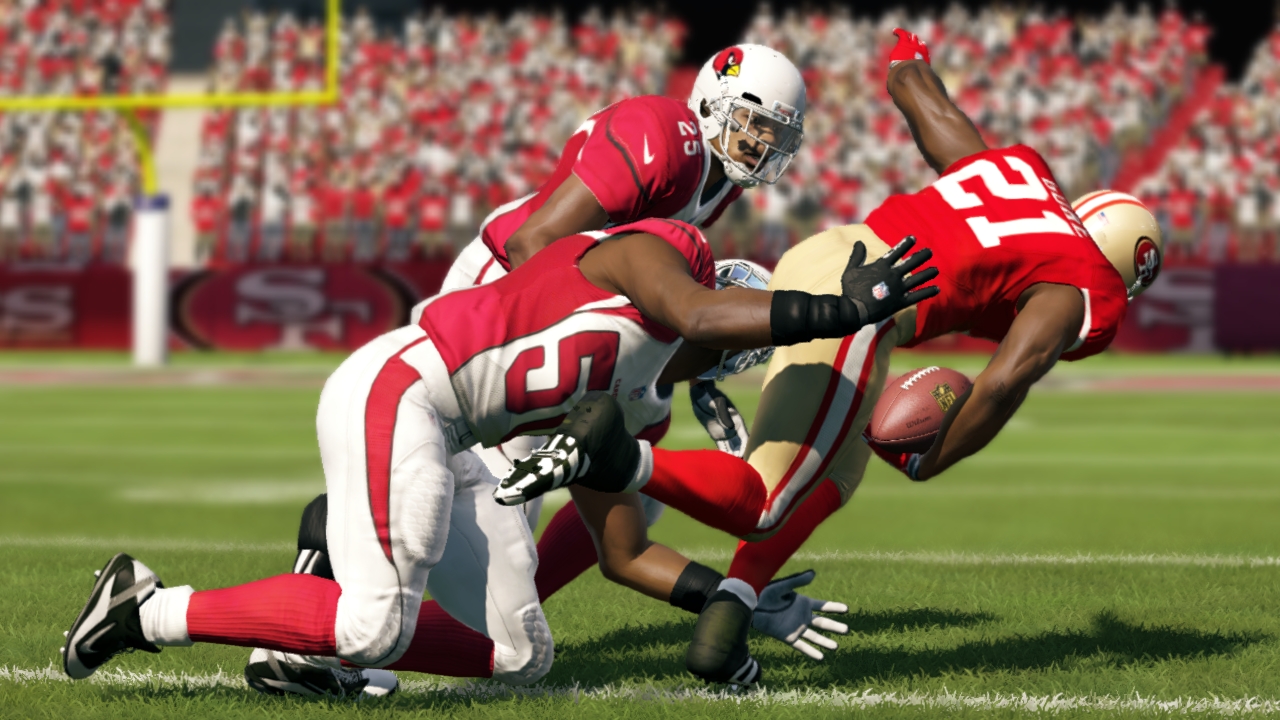 While the gameplay may be the same, the engine certainly isn’t. Making its debut is “The Infinity Engine”, accounting for player attributes such as mass, speed and body type in every play. Player interactions feel more realistic, such as a Quarterback throwing a wobbly ball after getting his arm grazed or receivers crashing harder to the ground. One of most impressive features of the Infinity Engine is its ability to run calculations during impacts to determine how the player will react. With this balance system, players can now regain their footing to continue plays. Body types even factor into the equation; a large player may have a better chance avoiding falling versus a smaller player in the same play.

Another cool feature is receiver awareness. In previous entries, receivers could unrealistically catch balls as they were looking forward. The new system actually ghosts player icons until the receiver is ready for the catch. While the ball can be thrown to ghosted players, the chance of completing a pass is highly unlikely. It’s a nice touch that adds a noticeable level of realism. One of the most impressive aspects of the engine is “Read and React Defensive AI”. In previous games, receivers who weren’t looking for the ball could blindly break up plays. Now, players can only respond to balls they can actively see. While this may not seem important, imagine the frustration that will be spared from seemingly impossible interceptions. 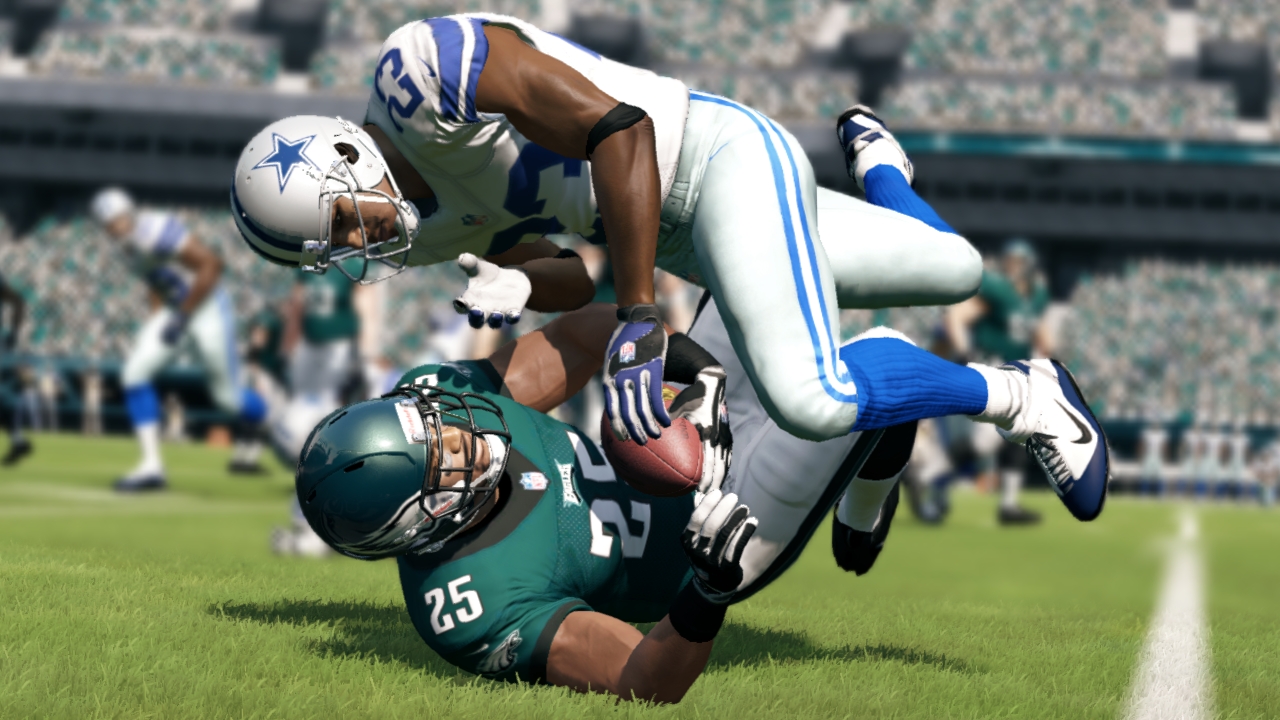 The Infinity Engine contributes to the game looking as realistic as it ever has, with many matches accurately mimicking gameday broadcasts. Players and coaches mirror their real life counterparts like never before, capturing obscure facial details of the players such as forehead wrinkles and hairlines. Lighting has been greatly improved, now tracking the position of the sun based on the time and lighting the field accordingly. EA has even gone so far as to correctly position the broadcast boost for commentators Jim Nantz and Phill Simms.

Besides looking the part, NFL on CBS’ Nantz and Simms also do a great job with their commentary, offering relevant observations throughout snaps. While the commentary can never perfectly reflect in-game action, the 9,000 unique lines certainly don’t hurt. Recorded with 24 tracks, the crowd sounds very immersive and fills surround speakers. The biggest downside audio-wise is the omission of EA Trax. For many years, Madden games offered a slew of tracks from licensed artists. Madden 13 nixes the feature in favor of an original score. Unfortunately, the score is boring and often times derivative, with one track sounding way too close to the Jurassic Park theme. Granted, Madden 12 didn’t have the best song selection, but losing EA Trax sees Madden 13 losing some of its immediacy. The game just doesn’t feel as current without them. 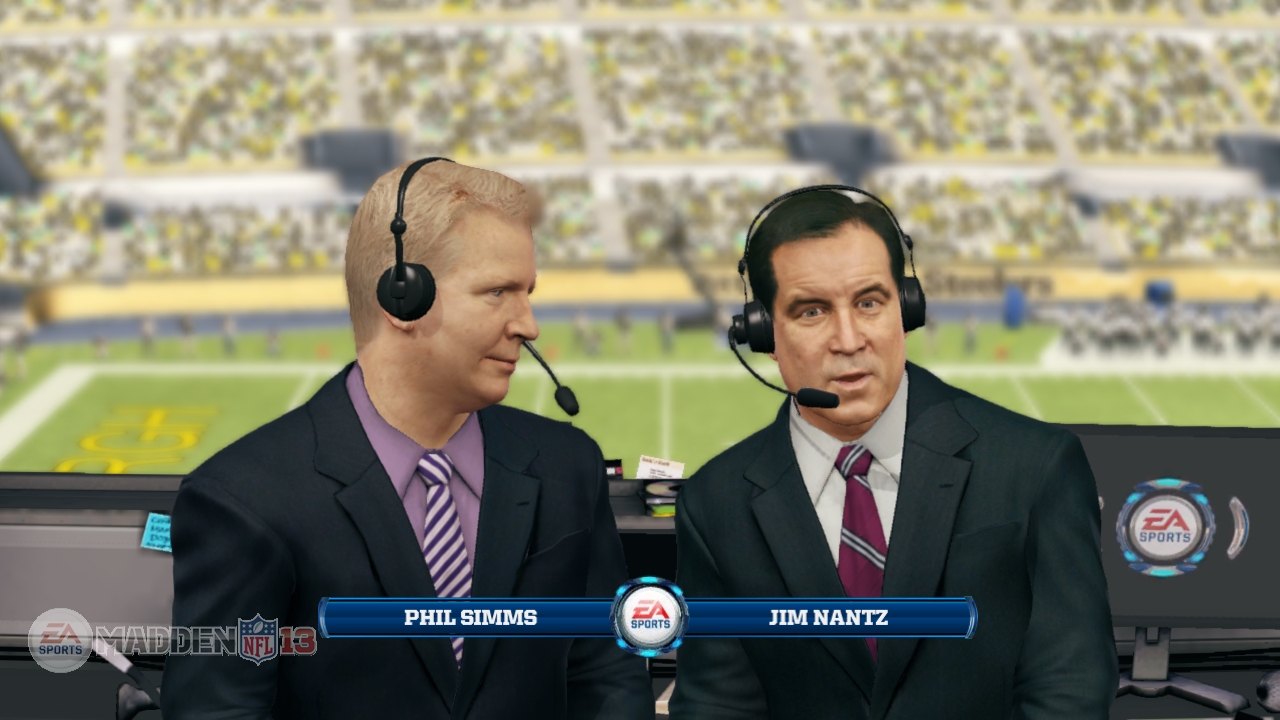 While every Madden is essentially the best entry to date, Madden 13 technologically advances the series forward in impressive ways. Even though not all the touted features may be immediately noticeable, they greatly contribute to improving the overall experience. Most importantly, though, Madden offers a fun game of football with or without friends. At the end of the day, isn’t that what the genre is all about?