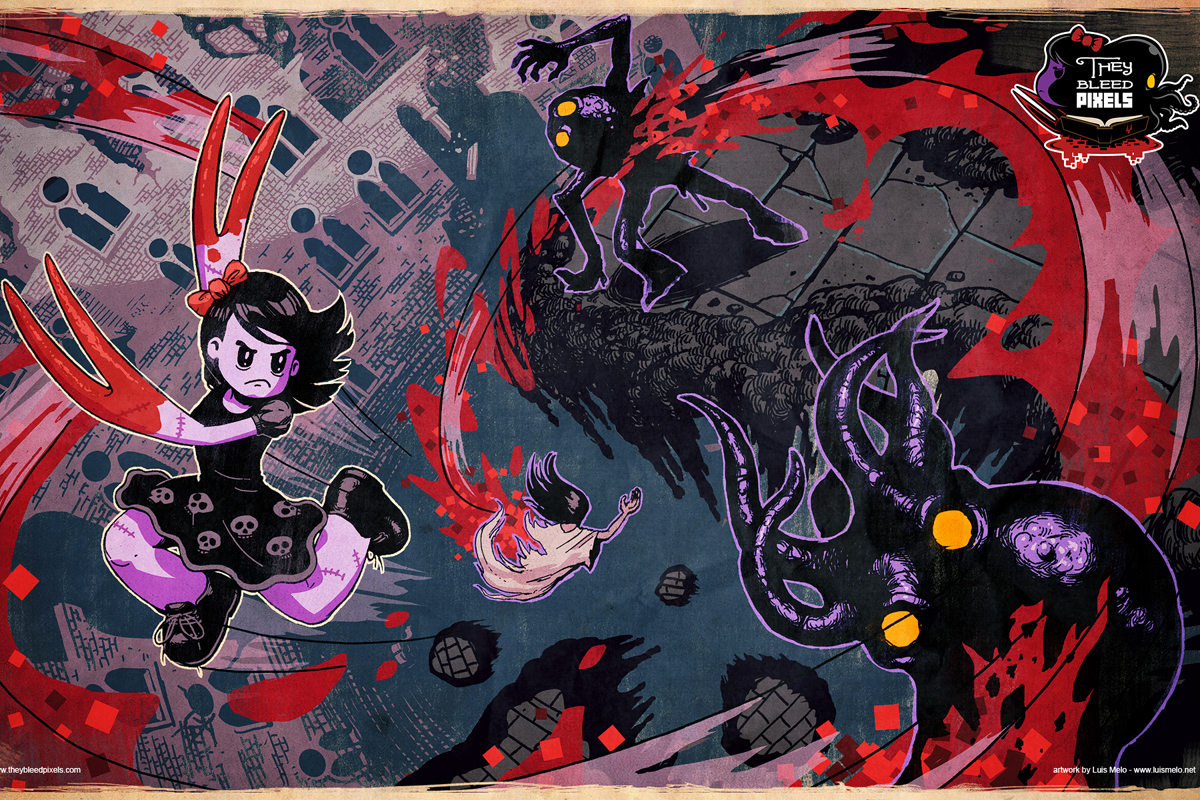 So that was painful. As in literally, my hands are physically sore after clutching the controller in a death-grip during a bout of They Bleed Pixels. Running, jumping, slashing, impaling, and working up a giant point-multiplying combo is always good fun, but They Bleed Pixels isn’t going to make it easy. This is an action-platformer that would have felt right at home on the NES, except for being smoother, faster, and with more Lovecraftian creatures shambling about the screen than the NES would care to handle.

With a name like Lafcadio Academy for Troubled Young Ladies, it was only a matter of time eldritch horrors began tormenting the residents. The new student, a cute little goth girl, has found her nightmares plagued not only by horrific visions of terrible violence against monsters, specters, and other troublesome critters, but also some truly vicious platforming scenarios. Her hands haven’t turned into bloody claws due the magic of a dark book of pure evil, it’s the endless hardcore challenge of earning a mid-level checkpoint that’s done it. 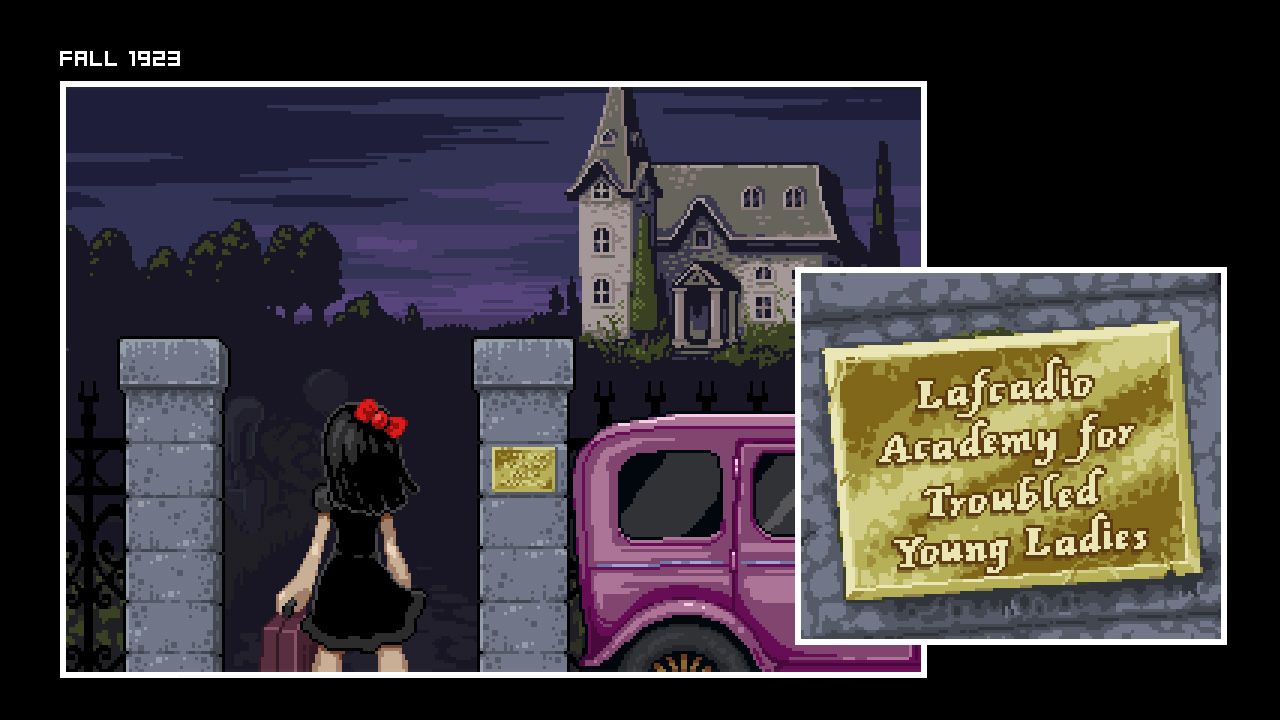 For all the difficulty, the controls themselves are very simple despite the range of movement available. Aside from the joystick, everything is controlled with a total of two buttons- one for jump and the other for attack. Logical movement combinations lead to different attacks, and they can be thrown out one after another in quick succession with just a bit of practice. This isn’t to say button mashing is going to do you any favors, though. They Bleed Pixels emphasizes both diversity in attacks for its scoring system, and smart usage of environmental objects for speedy elimination. Slashes with the claws are great for dealing damage, while kicks don’t actually hurt the enemies but do throw them around the level. A great combo, for example, would involve a dash attack followed by a kick to launch the enemy into the air, a jump for a few air slashes, an in-air double jump so it falls back to earth with some health left, a dive-attack onto its head, and then another launch and a few last in-air slashes to send it flying into a wall of spikes. Alternately, if there’s a wall of spinning blades on your tail, you can just run at the creature and do a crouching slide to trip it up and get past without all that time-wasting combat. How much you want to milk the enemies for depends on the environment and the situation, but it’s always fun to work on an x16 and greater score multiplier. 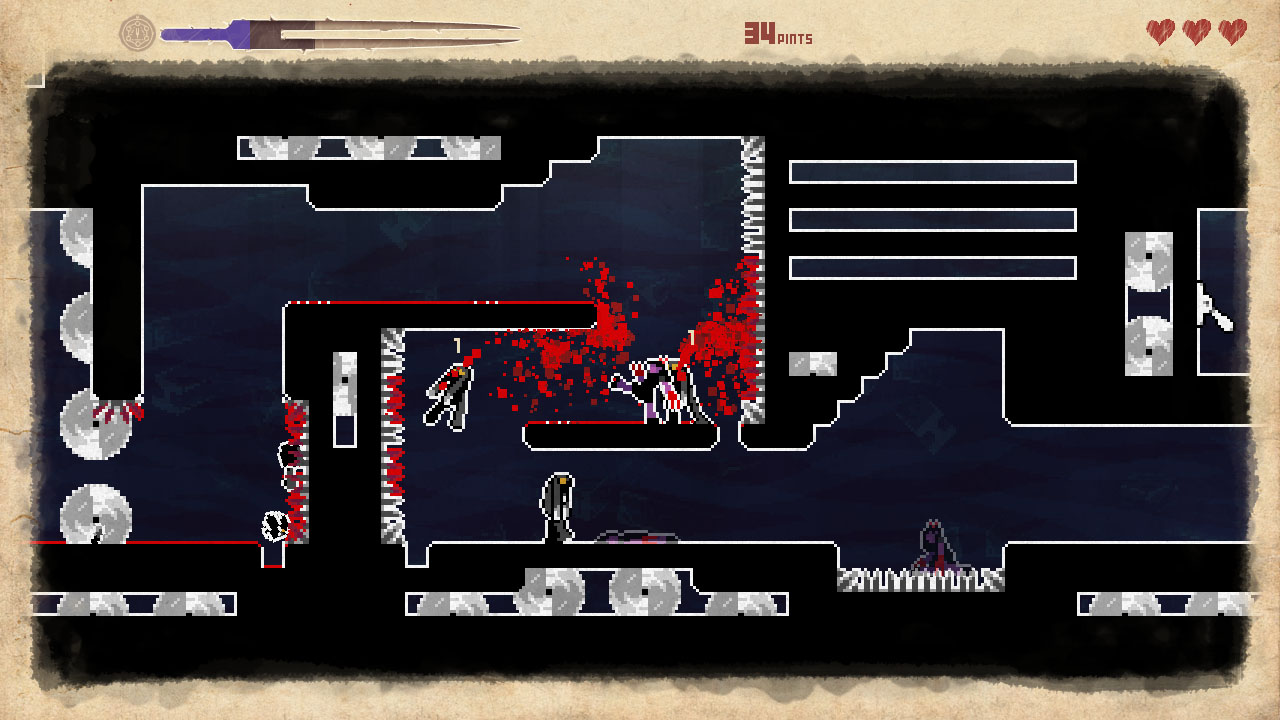 Still, it bears repeating that They Bleed Pixels is crazy-hard. You get infinite lives, and restarting at the last checkpoint is instantaneous, but a single level can easily take an hour and burn through several dozen lives on a first attempt. Sure, you can probably plow through significantly faster if you don’t kill every enemy and try for all the pickups, but then you’d feel horribly incomplete afterwards. Each level is loaded with spikes, tricky jumps, and inconvenient creatures waiting to send you plummeting onto a bed of stakes. The combat alone isn’t particularly hard, but when you need to combine all abilities to both take out the enemies while avoiding the billions of environmental hazards, death is fast and frequent. It’s incredibly rewarding to make it to the end of a level after drenching it in the blood of your opponents, but it’s going to take a lot of practice to get there. 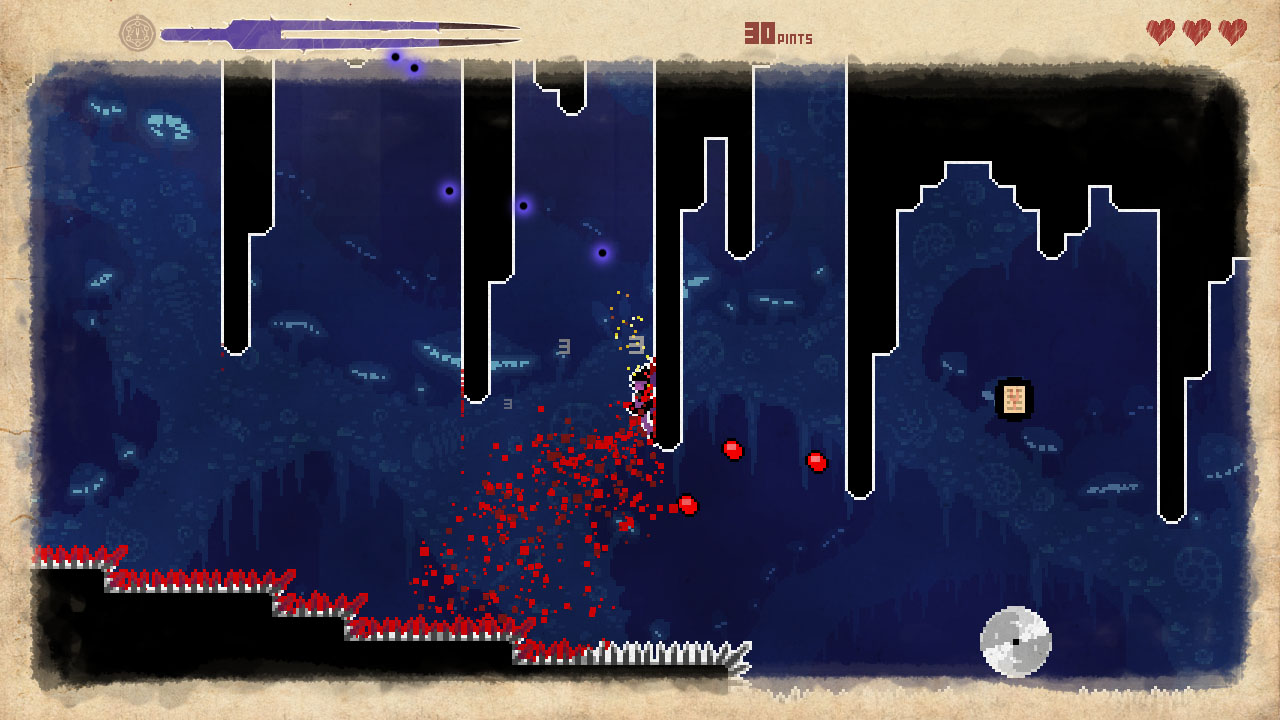 If you’re up for the challenge, They Bleed Pixels is a fast and fun action-platformer that will put all your reflexes to the test. It’s utterly unapologetic about killing you, and because the controls are so smooth and precise every single failure feels exactly like it should- as something that could have been avoided if only you’d played better. It’s not a game to play when you’re looking to wind down at day’s end, but bring all your skill and a load of patience, and They Bleed Pixels will make you feel like a magician with a gamepad.