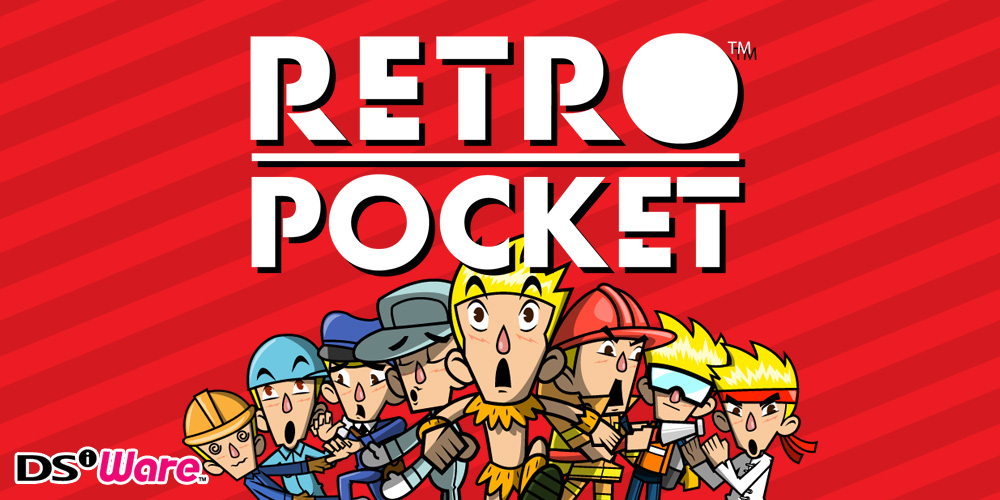 Mini-game collections are a real hit-or-miss deal. If you’ve got either really good or fun games, it’s generally worth a shot. With Retro Pocket focusing on LCD-style games, however, I couldn’t help but thing the idea was doomed for failure. After all, those things were rarely any good, and made to seemingly get kids to shut up in airports so the parents could buy SOMETHING to entertain them while they waited and cash-in on a licensed property. If you weren’t around for them, they were little handheld devices you could stick in a bulky pocket, or if you were lucky, you’d have one of the watch-based ones. Then, you could check the time AND play a bad game – like Tiger’s Game.com, but earlier.

LCD games themselves usually had a super-simplistic background along with a black outline of something resembling Batman (or whatever the character was) while a frame of animation was used to indicate an action. There really wasn’t a whole lot of depth to them, but some of them could be charming, even if they were rarely good. Recently, Johnny Kung-Fu had its own versions of these kinds of games and they were indeed fun and tough – so doing them virtually can work, however, that game used them relatively sparingly compared to this, where the entire game relies on eight of these simplistic games being either good or fun to make it a worthwhile purchase.

Thankfully, the games here are more hits than misses and combine to make this worth a purchase. Eight games are included: Fireman, Egg Drop, Whale Escape, Candy Factory, Kung Fu Hero, Fuel Drop, Postman, and Watch Your Head. There’s a fair amount of variety ranging from addictive to forgettable. Fireman has you putting out fires and saving babies – it’s perfectly fine, but gets old quickly. Egg Drop has you catching falling eggs and placing them in baskets. It’s another perfectly fine, but unexciting concept. Whale Escape is an interesting one – you’re tasked with saving an infant from the whale’s mouth, maneuvering over the blowhole while also avoiding PELICANS and placing him safely on a raft. Lather, rinse, repeat. The concept is a lot of fun and having multiple things to keep track of helps keep it exciting. It’s defintiely one of the highlights on the collection. Candy Factory is another one. In it, you grab up to three candies at a time from a set of conveyer belts and put them a bin, but like the I Love Lucy episode, you have to prepare for the speeds to increase. Things start off nice and slow, but quickly ratchet up forcing you to weigh whether to do one or two at a time, or risk going for three at a time but then having more zoom your way. It’s a blast to play – if only there was a Vitametavegamin mini-game. Oh well — maybe they’ll save that for Retro Pocket 2.

The second-half of the game lineup is also a bit hit or miss, but starts off solidly with Kung Fu Hero. Your goal is to protect your lady friend from flying bottles with wacky karate chops and/or kicks. If she gets hit, she’ll whimper, so try to prevent that from happening. It’s one of the leaner concepts in the game, but also fun because there is enough going on to keep it interesting. Fuel Drop is probably my favorite game here and that’s partially due to it being the only one that doesn’t stick to the rigid LCD styling. Here, you’re tasked with spinning two oil drums so that their color (either white or black) matches the color of the drops. I’m not sure where they got white oil drops, and perhaps that’s a question best left unanswered, but nonetheless, it’s the most addictive game in the bunch. Like Candy Factory, it goes from slow to fast quickly, and you have to make sure to press the correct shoulder button when things get fast because it’s very easy to lose your train of thought and spin the drum one too many times, or spin the wrong drum.

Postman has you collect three pieces of mail at a time from one of two piles and deliver them to three separate mail boxes while avoid the dogs between them. The base game is a little boring, but the Game B version of it is a lot more fun since it only gives you one pile of mail at a time, and changes them on the fly, so it’s got more going on. In general, the Game B versions are a bit more difficult, and change things up slightly, but none of them change things up to the degree that it improves the game quite as much as this. Finally, there’s Watch Your head, where you grab up to three small beams at a time and drop them into three separate piles. It’s basically a lot like Candy Factory in execution, and is one of the better games in the collection as a result.

It’s impossible to compare this game from an AV perspective to just about anything else on the system because it isn’t trying to look like a 3DS game – it’s paying homage to Tiger/Game & Watch LCDs and in that sense, it’s a perfect replication. It’s got every little thing done right, down to the light shadow outline that lets you know where you can go on the playing field. Similarly, the music is very simple, and the sound effects are usually nothing special outside of a few, like the clanking beams in Watch Your Head and the crying babies in Fireman and Whale Escape. As a result, you’re better off playing it muted since there simply isn’t much to hear, but I can’t really say the audio is bad since it is accurate for what the developers tried to replicate.

Retro Pocket is hurt by some boring games being included, but remains a worthy purchase due to a handful of really fun ones. Fuel Drop is outstanding, while Watch Your Head, Candy Factory, Kung Fu Hero, and Whale Escape are really good. At only $5, it’s an easy recommendation for those with fond memories of portable LCDs and/or wanted to see what they’d be like if their developers were allowed to focus on making them fun instead of making them for marketing purposes.  If you didn’t grow up with them, however, it may prove difficult to embrace since one of the best parts about it seeing just how much better the included games are than the garbage that was shoveled into stores in the ’90s for a cheap buck.