It’s easy to hype up a Kickstarter and get excited about a thing that’s going to be, but then the waiting starts.  The minimum delay between Kickstarter completion and content delivery is usually at least a couple of months, and that holds true not only for games but also any number of other things that might catch your interest while browsing other categories.  You wouldn’t know from the gaming sites coverage, but there’s a decent amount of nice stuff on Kickstarter that’s got nothing to do with video games at all.  Two completed projects landed in my mailbox yesterday, and while neither having anything to do with video games, seeing how rewards can turn out may be of interest to the many gamers who have backed projects still left in the lurch.

The first item was Diana Sprinkle’s Mystery Pets art book.  Diana is an artist who draws really cute, bizarre things, which is a combination I have a very hard time resisting.  The book itself turned out very nice, clocking in at 120 pages instead of the 96 it was originally intended to be due to a very successful Kickstarter, but the major treat behind this one turned out to be opening the package.  I actually regret not trying my hand at an unboxing video, honestly.  Inside the large manila envelope was a piece of cardboard scored twice along the spine so that it folded square (rather than v-shaped) over the package contents.  One side of the cardboard “cover” had the Mystery Pets book taped to it, and the other had an issue of a comic she used to be the artist on, both, of course, in plastic sleeves.  There was also a much smaller postcard-sized sleeve with a few more goodies inside.  Here’s the complete list of contents-

Mystery Pets, the star of the show.  Full color, bursting with art, and a paragraph or two of text beside each piece to give a bit of info on it.  Available at the artist’s site, if you’re interested.

Two separate sticker sets, one being a selection of art and the other being themed on the cute little “knittens”.

Two postcards with different designs on each

An original sketch of a monster kitty groaning “PETTINGS” in a dark & spooky font.

I’d have been happy with just the book, seeing as that’s what got the initial backing, but what made the project really stand out in the end was how much fun it was opening up the package and finding something fun in every nook and cranny.  The initial goal for the book’s printing was $1200, and the end result of $9656 meant that the project had room to grow into a great little package of goodies.

Obviously, not every Kickstarter is going to work with stretch goals, no matter how much money it makes (Castle Story is another good example), and Ian Schon’s The Pen Project delivered exactly what was promised, no more and no less.  What was delivered, though, was a truly fantastic pen that I’m hoping to get many years of use out of.  It’s a simple, solid tube of aluminum with a brass screw on top to change the ink cartridge with.  The cap screws on over the writing side when not in use, and is extra-long so that the pen, when not in use, is very short and easy to stick in a pocket.  When in use, the pen cap screws on to the back end and extends the length to standard pen size.  The weight distribution is just right, and the ink cartridge writes a very clean line.  It’s also a write-anywhere pen, in case I find a need to jot down some notes while scuba diving in the oceans of Europa. 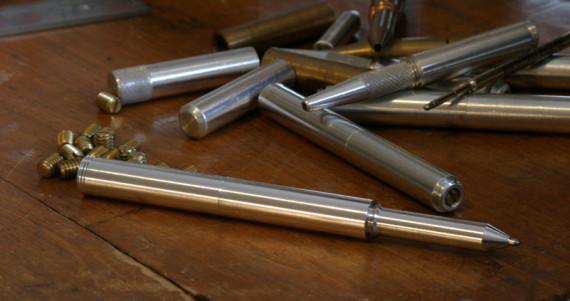 The Pen Project pen was designed as an item to use, basically, forever.  Its simple design and rugged construction make it something that should stand up to, literally, decades of use, and the unfinished aluminum is going to wear and gain character over those years.  As you might guess, I’m very happy with it at the moment. 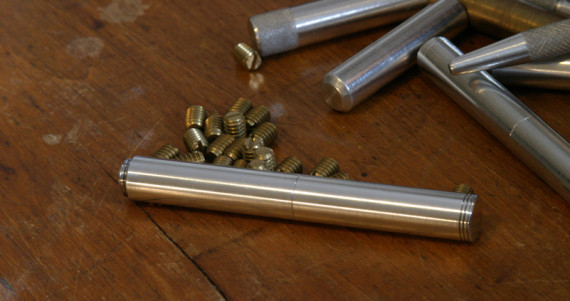 So, two Kickstarters, two packages in the mail on a single day.  One ended in May and the other August, but different projects have different production times, so what can you do?  Both projects came through in the end, meeting or exceeding expectations, and that’s the end result I was hoping for.  If the video game section pays off this well (and FTL absolutely did.  Usual disclaimers- different developers, different results, caveat emptor, etc.) it’s going to be a very interesting couple of years ahead.