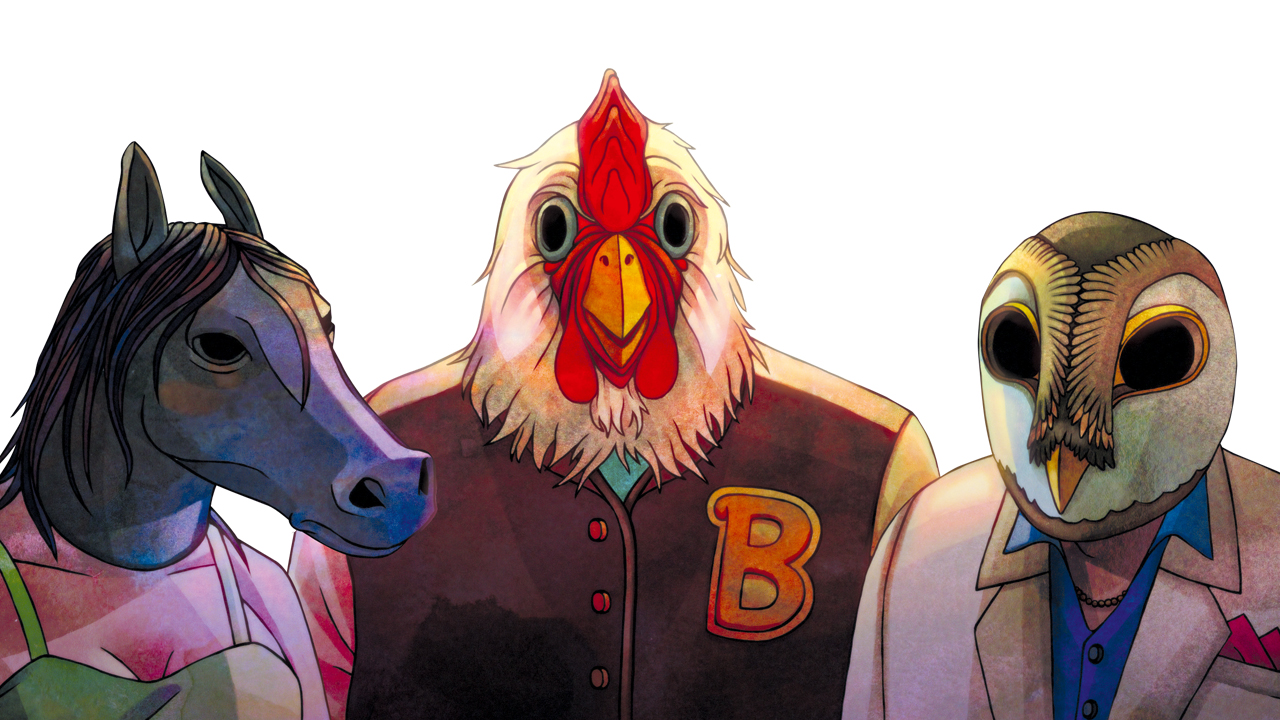 Hotline Miami is an overhead shooter set in the drug-filled days of the ’80s, combining some of the greatness of Miami Vice —  like atmospheric lighting, outstanding music and white and powder blue suits — with a lot of violence, a very ominous tone, and a DeLorean that takes you from mission to mission. The dark tone stands in stark contrast to the 8-bit style used for the graphics. The insane adventure itself begins with a crazy hobo teaching you how to kill people. Why? Who cares – the end result is a crazed hobo teaching you to murder, and it’s not only awesome, but leads in nicely to even crazier action. The core game is built around killing waves of enemies with whatever you have handy — baseball bats, crowbars, guns, and even briefcases.

You’ll go room-to-room beating people to death in a style that at least on a superficial level, looks like an 8-bit style with Smash TV gameplay. However, the game doesn’t use twin stick controls – instead opting for a mouse/keyboard setup with the WASD keys. It took a long time for me to get remotely used to this setup, but it works fairly well. I’d still prefer to use a controller for this though, especially after seeing Retro City Rampage combine an overhead 8-bit gameplay style with twin sticks that allowed for very easy shooting and combat controls. Here, the controls aren’t quite as easy to use, but still work well enough after some practice. WASD moves you around, while the mouse positions your character, the right button picks up and throws weapons, while the left button uses whatever weapon you’ve got equipped and Shift aims your guns towards the heads of those who dare get in your path.

The game may seem simplistic, but there’s a lot of strategy to it. Careful positioning with regards to where you are in the environment versus where your enemies are and especially the direction you’re facing is paramount to succeeding here. Each weapon has its own range and pros and cons. Guns are one-hit kills, but make a lot of noise and will alert more enemies to your location. Bats and crowbars might kill in one shot, but will usually take more shots, and the more time it takes to kill, the less time you have to prepare for the next wave of enemies.  You’ll have to hit a foe just right  to kill with one hit, and you can even kill two enemies with one shot if you’re REALLY lucky.

However, while it may take more than one hit for enemies, you’ll be killed in one, so you can’t afford to be off by even a pixel. Each enemy is like a fast-draw duel because if you don’t hit first, you’re dead. However, because each kill requires so much skill, they each feel rewarding and it’s been a long time since I’ve played a game where every kill gave me such a thrill to get.

Visually, Hotline Miami will remind people of not only 8-bit games, but also Retro City Rampage – only with a much darker style and tone. Lighting plays a large part in things and extreme colors for it help set a tone for each room. There’s also a weird video filter placed over the gameplay that makes everything seem like surviellence camera footage. It fits in perfectly with not only the late ’80s setting, but also adds some logic to the overhead viewpoint as well. The animation is rather impressive given the 8-bit graphic style. It’s more elaborate than the usual one or two-frames you’d get from games then, but is just limited enough to work with that visual style. Having it be kind of limited helps because it allows you to time things out a bit easier in your head and time attacks better. There’s a lot of diversity and color used in the environments, which helps HM feel different from a lot of other overhead shooters with all-too-similar environments to battle in.

Hotline Miami’s soundtrack is a bizarre mix of synthesized music and dubstep that does a perfect job of merging the era it’s set in and the one it’s being released in. You get a little slice of ’80s modern and the new ’10s modern for better or worse, but the strange blending of the two for the songs works. In theory, it may sound like a mess, but in execution, it works wonderfully.  The sound effects are quite good, but aren’t as memorable as the music. Still, the shotgun blasts are satisfying as is the smack of a bat against a skull. They certainly accomplish their goal, and it’s hard to knock them since pretty much anything’s going to pale in comparison to a soundtrack with as much life as this one.

Hotline Miami is an outstanding title that manages to stand out despite both retro-styled games and overhead shooters being crowded genres. While I wish it supported controllers, particularly twin sticked-ones, the default control setup works well once you put some time into it. It’s an easy recommendation for those who love overhead shooters, games with creepy tones or retro styles and enjoy either dubstep or synth music. The soundtrack is one of the game’s greatest assets, and would be worth buying on its own regardless of interest in the game itself. Anyone used to a WASD control setup will want to play this ASAP, while those who aren’t may be better served to wait for a sale.