Let’s be honest; no one wants to wake up to the smell of rotting flesh and sulfur in the morning. Unfortunately for Daniel Garner, his day job requires it. After a car accident hurls him into damnation, he has been tasked with collecting seven thousand souls in order to see his precious wife again. Remaking a game such as Painkiller is no easy task, so has The Farm 51 found the right direction to take the series, or should they have left this one dead and buried?

Entering a room, the door closes behind you and a wave of enemies pop out of nowhere. Clearing them out, a new door opens only to shut after entering it and even more undead file through. Congratulations: you now know the majority of gameplay Painkiller: Hell & Damnation has to offer. It can be argued that most linear first-person shooters have a similar formula, but at least they have the decency to include dialogue and context to what’s going on.

It doesn’t help that a number of levels don’t require any thought or skill to complete. I stood in a corner with the painkiller weapon (it’s a spinning blade for anyone who hasn’t played the series before) and completed two levels without failure as the enemies idiotically ran straight to their deaths. The bosses do require a bit more strategy, but when the majority of the game has probably the worst AI humanely possible (at least in the last eight years), it’s hard to consider this to be fun. It’s definitely amusing to watch enemies blow up or become decapitated, but it wears thin after the first hundred times.

The story has been somewhat altered but remains largely the same in concept. Daniel Garner is on a quest to find his lovely wife after the two died in a horrible car accident. The biggest problem here is that there’s a serious lack of storytelling elements. There was no effort made whatsoever in establishing characters, not to mention an unbearable script full of poorly executed one-liners that add more confusion to the motivation. There’s no connection whatsoever to the different locations when moving between chapter to chapter; one moment Daniel’s in a subway station, the next he’s on top of a giant tower fighting a dragon demon. Cinematics are usually located at the end of each act, with some exceptions, and are disappointingly short and vague.

Another issue with Painkiller is the serious concern over hit registration. Most of the time, when striking more prevalent enemies such as bosses, it’s painfully difficult to determine if attacks are hitting their mark. There’s no registration other than that later in a fight, the boss will sometimes go into a new, more powerful stage. It’s one of the most infuriating problems that have been addressed in plenty of modern games.

Painkiller looked great back in 2004 and while it keeps the aesthetic alive, there isn’t a whole lot that has changed. As an HD remake, maybe it is for the best that things are kept familiar as it’ll bring back fond memories, but it feels mainly like an upgraded texture pack. It doesn’t help that the game is artistically bland and can look downright ugly at times. It definitely has been updated, but it’s no surprise this is a HD “remake” of a 2004 game.

There are two positive notes to mention about Hell & Damnation, though: enemy design and music. While not new to the series, there are a variety of demon designs that are both creative and visually appealing. Seeing a Godzilla-sized monster fill up more than the screen can handle is surprisingly terrifying. The music, while a bit repetitive, is a nostalgic slap in the face as hearing those heavy tracks play when entering a battle will inject a dose of adrenaline into your veins.

You shouldn’t go into Painkiller: Hell & Damnation hoping for a good single player campaign, because you won’t get it. While you’d hope for multiplayer to sew up the wound, it instead leaves it gaping. While there can be a few redeeming qualities to the hectic multiplayer attachment, it falls flat because it doesn’t go outside the box and mainly just offers traditional remedies. It’s hard to recommend this over the many fast and chaotic arena based shooters that are out there. It’d be best to stick with the original or go back to a game such as Unreal Tournament instead. Cooperative play, on the other hand, will lead to some enjoyable gameplay sessions, but mixing another Daniel Garner into already drab experience such as this doesn’t make it any better. 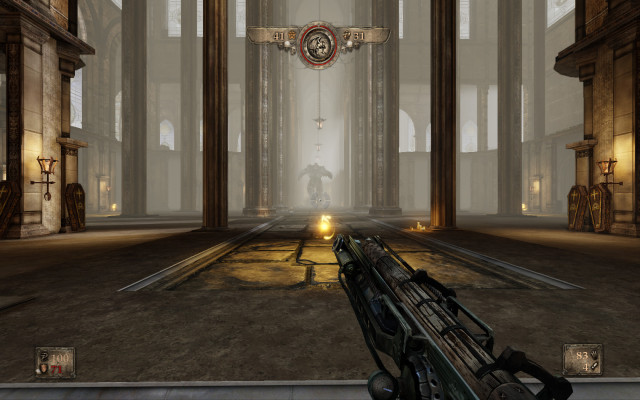 This isn’t a remake or a reimagining of the original Painkiller; this is a high-resolution texture pack for an outdated eight-year old game that’s missing significant story beats. You can only reuse elements of a certain formula for so long before they become stale and archaic. It’s a fundamentally flawed game that consists of going from room to room with no plot other than to collect seven thousand souls. Even at a budget price, this will only be a compelling offer to the most dedicated of fans.