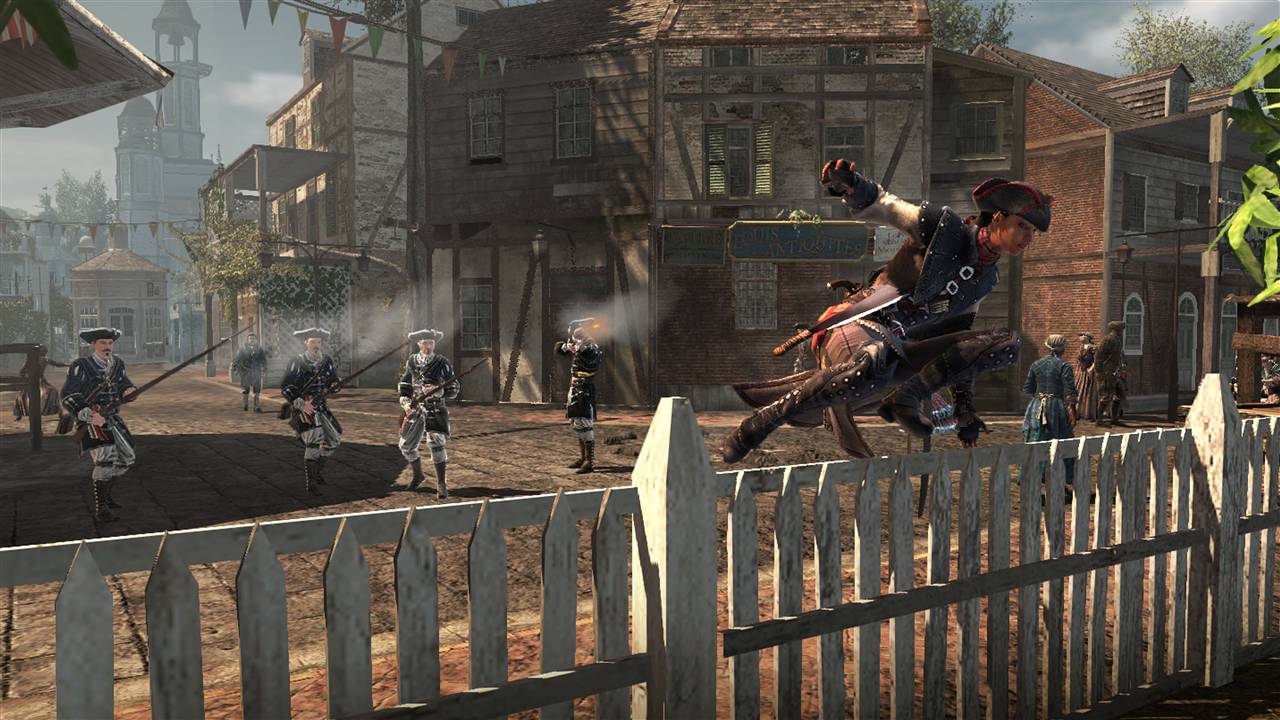 PS Vita is in need of a big game. While it’s been unfairly maligned, the past few weeks have seen the release of three solid games go unnoticed (Spy Hunter, Silent Hill: Book of Memories and Super Monkey Ball: Banana Splitz). It’s clear the Vita doesn’t have the adoption rate to get by on a stream of solid — but unassuming — titles, so Assassin’s Creed III Liberation could be the last chance for the system to gain awareness. Lucky for Sony, it’s going to prove hard to ignore the companion piece to the most anticipated game of the year. Not only is Assassin’s Creed III: Liberation a potential game changer for the handheld, but also its biggest opportunity to prove to the general public that a true console experience can be had on the go; but can it?

Instead of serving as an expansion to Assassin’s Creed III, Liberation boasts an entirely new story and characters. Ditching the Animus user subplot, players assume the role of the first female protagonist of the series, Abeline De Grandpré. Daughter of a wealthy merchant, but from slave descent, Abeline is recruited into the Assassin Brotherhood in hopes of solving the disappearance of her mother, but soon becomes entangled in stopping an injustice that threatens the world. Set in and around Louisiana, the game spans multiple years and is heavily influenced by the end of the French and Indian War. With constant dialogue and multiple cutscenes, it’s impressive how detailed the story is considering it’s a handheld title. Unfortunately, while there are flashes of sentiment, it’s largely a convoluted tale that’s hard to comprehend unless strict attention is paid to character’s names and seemingly insignificant plot points. As the dialogue is well-written, blame lies on the decision to have the setting/year jump around too often. 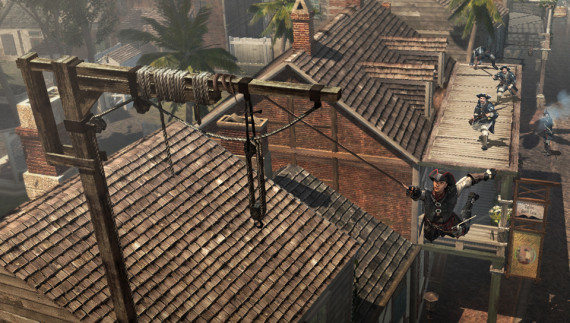 Gameplay in Liberation largely remains the same as past titles. Holding down R activates high profile mode, where Abeline is in a constant sprint and automatically begins to freerun through environments when possible. Jumping is accomplished by tapping X, giving the distance necessary to leap long distances. Freerunning remains as fluid as ever, with the liberating (no pun intended) feeling of successfully hoping across entire blocks of a city preserved. Combat carries over brilliantly, featuring the renowned system the series is known for, where attacks are executed with the square button, while enemies are countered by tapping the circle button. Kill Chains return from past titles, but are impressively optimized to work with the touch screen, allowing players to tap which enemies to include in the chain when activated. Given the condensed platform, it’s amazing how similar it all plays out compared to its console predecessors, rendering the game its best at its most chaotic.

While the formula remains unchanged from previous entries, there are a few intriguing additions. The most notable one is the ability to change personas. While Abeline is an assassin by default, stopping by a clothing shop lets her change into a slave or lady outfit. The slave outfit allows for running through town with less suspension, boarding ships easier, going into camps unrecognized and inciting riots. The lady outfit, however, prohibits any running or jumping. The world changes when in the guise of a high-class lady (doesn’t it always?), allowing bribing and charming. While guards treat the slave persona like dirt, dressing like a lady woos them, rendering them unable to do anything but follow devotedly — ironic justice which comes in handy as the lady persona attracts muggers. An addition strong enough for inclusion in future main series installments, the persona system adds a whole new element to the world and allows for more strategic mission planning.

Perhaps the most impressive aspect of Liberation is the sheer scope of the world. Players start in New Orleans and soon progress to other locations like the bayou and Chichen Itza. While most handheld titles attempting gameplay on a large scale would simply replicate environments across the world, Liberation is full of unique areas. New Orleans is a bustling cityscape complete with alleyways, stores, compounds and docks, while the Bayou has miles of swamps and trees. While you’d think newly reached areas would prove more similar as the game progresses, areas like Chichen Itza, with its pyramids, deciduous trees and Mayan elements quickly dispel the notion. Those who like to explore and find hidden bonuses will be happy to know that nearly every area is presented in an open sandbox, complete with shops to buy, witnesses to kill (to lower the assassin’s notoriety), magistrates to bribe, viewpoints to synchronize and treasures chests to loot. Synchronizing viewpoints proves to be one of the most appealing aspects of exploring, with figuring out a way up tall structures a game in itself. Being able to deviate from the main quest and look for something new to discover lends well to the handheld format and ensures longevity of the title long after the story is completed.

In addition to the main sequences, a trade system exists to serve as an ongoing minigame. Activated by sitting down in front of a map at the operations base, the trade system allows for commanding a fleet of mercantile ships. There are multiple ports that specialize in different goods to sell, ranging from cotton to tobacco (it’s refreshing when a game isn’t afraid to admit tobacco exists). Starting with one, ships can be purchased and deployed at ports to purchase their goods. Once a ship is carrying a satisfactory amount of goods (every ship has a set amount of cargo space), it can be sent to a port currently in need of the item and willing to pay a higher price. Along the way are hazards like pirates and weather that must be taken into account. As the entire system uses the same in-game currency, it proves a very addictive and hopefully lucrative system that could stand alone as its own title. 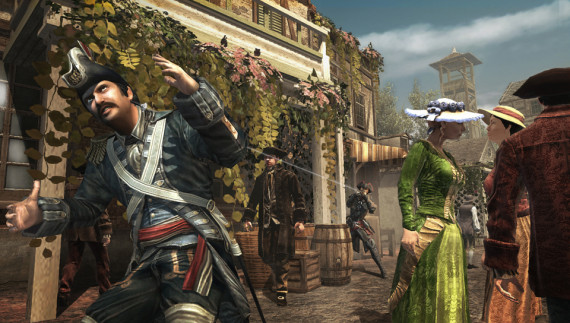 As Liberation has been touted as a killer app for the Vita, it comes as a disappointment that the graphics don’t match the best the console has to offer. While serviceable for a handheld title, the entire affair is somewhat low-res and pixelated for what’s clearly a high-budget release. It’s rare to find an environmental element or character that’s completely smooth and unlike say, Uncharted: Golden Abyss, it never pops from the OLED screen. Issues with frame rate exist, with noticeable slowdown during faster portions of the game — it never impedes the flow of the action, but further removes the game from its console brethren.

Luckily, the engine itself is strong, with the sprawling areas featuring hundreds of characters and nary a second of loading time once entered. NPCs seem intelligent as they move around freely and can be interacted with via actions like pickpocketing or shoving out of the way — same as always. There are other nice touches like the characters mouths visibly moving as they communicate and the amount of an area visible from a high perch. With great movement, detail and cutscenes, it seems as if the game was originally rendered at a higher resolution, but had to be toned down to fit the massive title onto a Vita game card. As the graphics are always serviceable, this was a preferable decision over cutting content from the game, but it’s an issue that needs to be addressed with the Vita moving forward; we know it can produce console-like graphics, but if it can’t while generating rich environments, it will never replicate the home-gaming experience.

While it can’t match the grandeur of its big brother’s namesake, Assassin’s Creed III: Liberation is a strong game in its own right. With an original story, sprawling environments, excellent use of the Vita’s touch capabilities and tons of bonuses to find, it’s sure to be a premiere game of the console for long to come. If the graphics were more refined and the story less disjointed, it would certainly rival the best the series has to offer. It may feel like a handheld title, but it’s a thoroughly entertaining one that serves as an excellent Assassin’s Creed III companion piece on the go.