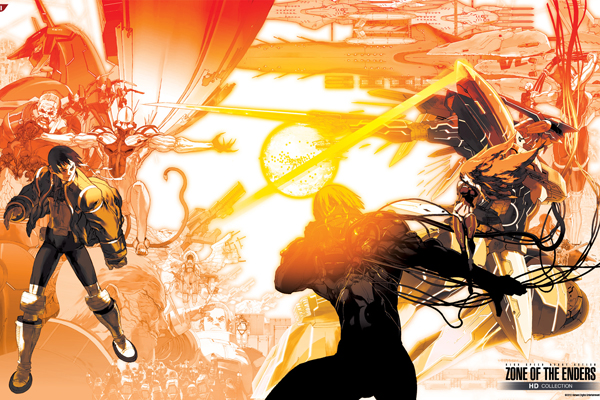 How is Zone of the Enders 10 years old? The first game came out in 2001 and the second in 2003, so on average it’s been a decade since the series has been graced with any new attention. The occasional piece of ZOE 3 concept art has been displayed, though, and with Zone of the Enders HD giving the first two games a well-deserved upgrade, maybe there’s hope for another. In the meantime, the original pair are worth revisiting, if only to see how nice they look on today’s hardware.

In the original Zone of the Enders, a young boy finds a giant robot, as young boys tend to do on a near-daily basis in Japan. After seeing his friends crushed by a giant mech, ending up as nothing more than unintended collateral damage in an invasion of the colony orbiting Jupiter, Leo stumbles into Orbital Frame Jehuty. A quick takedown of a couple enemy robots and he’s off to get rid of Jehuty by delivering it to the authorities, if only so he can stop being part of the continued destruction of his home and the civilian deaths that happen in the battles’ wake. Obviously that’s not going to work out, and instead he’ll have to save the day by fast-action giant robot ass kicking.

Zone of the Enders 2 replaces Leo with a more grizzled combat veteran, now retired from fighting and working as a miner scavenging magical future-mineral Metatron. After finding Jehuty buried in ice, and taking out swarms of enemies in epic fashion, Dingo finds himself dropped right back into the conflict he’d retired from. Once again, giant robot carnage is the proper solution to the problem.

While both games in the series are a bit heavy-handed in the drama (“You can’t deceive me with beautiful words like freedom and independence any more!” is a wonderfully terrible direct quote), the drawing power is in the epic action of the battles. Jehuty moves like a dream, is armed to the teeth, can perform a good number of attacks with a relatively simple control scheme, and the combat pace is lightning fast. Jehuty isn’t bound by gravity, and flies gracefully around her opponents using a lock-on camera that keeps the action rigidly centered. The primary attack serves double-duty as either a gun or sword swipe, depending on enemy range, and the effects of both change depending on whether you’re boosting or not. While the regular gun is little more than a pea-shooter, boosting it turns into a barrage of lock-on lasers. Hit boost while standing still, though, and Jehuty gathers energy into a giant plasma ball of doom. The changes in sword attack aren’t quite so impressive, but close combat is already such a chaotic blend of attack/defend/counter that it doesn’t need to be. Whether you’re going up against giant bosses or a swarm of little enemies with a couple of larger bots harrying you from the sides, fighting is always going to be a blast.

While the combat is as great now as it was a decade ago, other aspects haven’t aged quite so well. The cut-scenes in both games have their issues, although oddly ZOE1 came out better. Yes, the character models in ZOE1 are, frankly, terrible, but at least they move at a smooth, regular framerate. For some reason the non-animated parts of the ZOE2 cut scenes move inconsistently, despite the in-game action being silky-smooth no matter how many enemies swarm the skies. Still, the animated bits in ZOE2 look very nice, and the new animated intro to the collection is great fun. Note to the animators, though- female breasts have nipples, and pretending they don’t just makes the full frontal shot look funny.

It’s hard to find something to complain about with Zone of the Enders HD. Yeah, both games are a bit too talky, and somewhat short as well, but they deliver high octane giant robot action with grace and skill. Both games hit the ground running, give the player a ton of power, and don’t let up on the energy until done. Now go out and buy this so Konami knows it’s time to get serious about Zone of the Enders 3.