The Kinect can be used to develop a number of guided titles, but it’s more of an exercise device than it is a gaming device. When the best games with a purple box are cardio dancing and exercise titles, you know something has gone wrong. Thankfully, Microsoft is embracing it as they have teamed up with Nike and Sumo Digital to create the ultimate interactive workout experience. Nike+ Kinect Training looks to outclass both EA Sports Active and Your Shape: Fitness Evolved with its well sponsored exercise sessions.

The core of Nike+ Kinect Training is ultimately about setting up a routine that’ll fit your interest and following through with it. After taking a lengthy test, players will be graded on fitness and athleticism, either demeaning them or giving them a boost of energy. Either way, three programs will be made available for selection, each one containing its own set of moves that’ll work different parts of the body. It allows for high customization with an automated system that will select each workout session based on the results of the test. 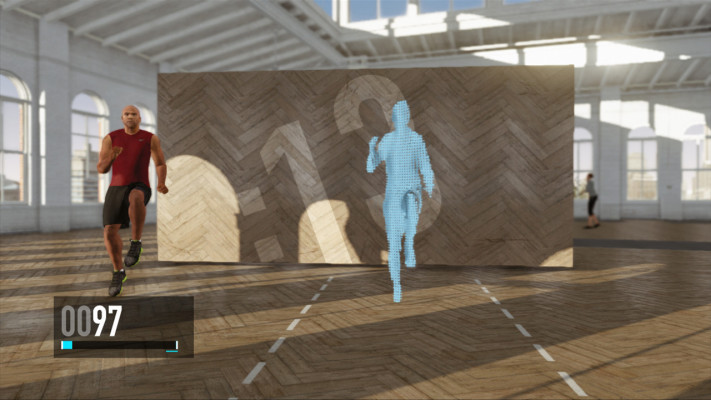 The exercises are actual training drills that I’ve personally used before, with the odd one that feels out of place. One thing that needs improving, though, is voicing what the player is doing wrong. It has a similar mechanic as Your Shape where the trainer will verbally say what needs improving, along with a small indicator popping up at the bottom left. The only problem is that the game will usually go to a new camera angle to display the right action, and the majority of the time it’s out of rhythm. So when it switches, the trainer is out of sync to the overall exercise, causing some confusion and constant failure on that one action.

At times, there will be mini-games thrown into the mix that’ll involve evading dodgeballs or trying not to break oncoming glass. They are fun games that make sure the player is still agile and ready to go, even if they just require moving out of harm’s way. The slight delay of the Kinect picking up movement doesn’t play too much of a factor in the more strict exercises as it’s pretty lenient on what counts and what doesn’t. Wearing baggy clothes can also be a factor when doing push-ups or other horizontal activities, but thankfully they are far and few between.

The sense of community and overall encouragement is one of the better aspects about the game as you can track your entire progress online through Nike Fuel and even challenge friends. After each training session, just prior to the cool down period, an option to add an additional nine minutes to the workout will be made available, ensuring that the blood is kept pumping. It encourages players to do the best they can and it really works — just don’t overexert yourself. After playing it for nearly three weeks on a strict routine, I could feel a difference in endurance but not particularly in muscle mass. This is something gamers will have to put weeks, if not many months, into before they see significant results. 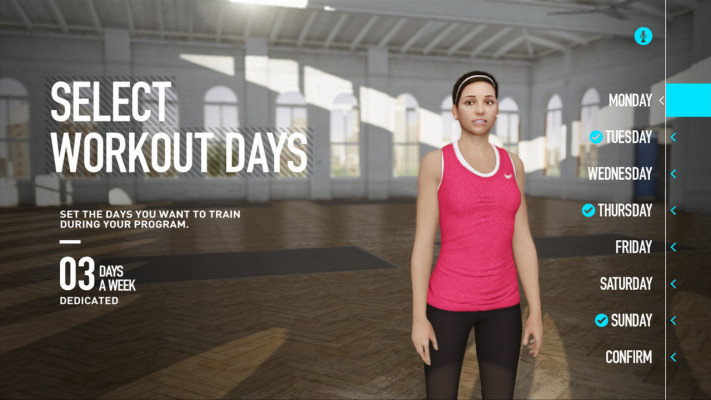 The user interface tries to take a page out of Dance Central’s book with swiping and voice controls, but it fails on most fronts. Voice commands are almost always unresponsive, working maybe thirty-percent of the time, so having a dead tired individual try to select an option on the precise menu doesn’t come with much succession. The worst, though, is during a breather periods. Anytime I exhaled loudly or breathed a sigh of relief, Nike+ will pick that up as “I’m ready to go”. Swiping controls are not a whole lot better as, while it’s a bit stiffer to navigate, meaning fewer errors, it does involve an extra amount of effort in trying to gauge how far your hand must go up and down. Even reaching for a bottle of water during a break period can lead to accidentally hitting the “I’m Ready” switch, putting extra stress on an already frustrating user interface.

If there’s one thing to note, it’s that Nike+ Kinect Training uses up the entire space the Kinect can handle. My setup allows me to have more than enough room to move back and forth, but side to side and vertically is limited, causing severe issues on my end. There’s just something about having to move all my couches to the back of the room in order to play any game that isn’t all that appealing. There are a number of routines that require lying flat down, doing push-ups or leaping from side to side that take up an incredible amount of space. It’s the most demanding Kinect game I’ve ever played, and without the proper amount of room, you won’t be able to get anything done. 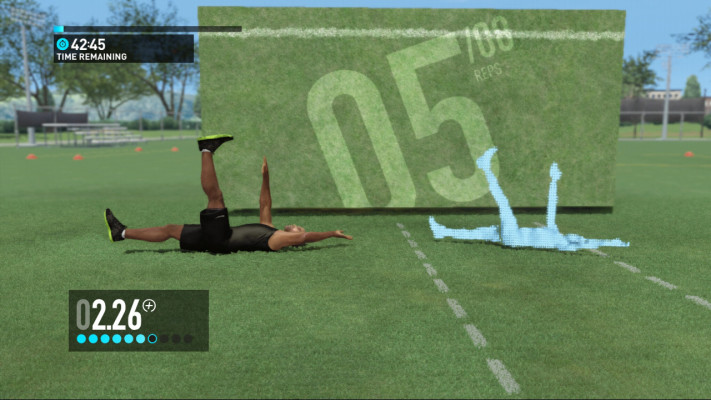 Nike+ Kinect Training is not a fun game, but then again, it was never meant to be about entertainment. It’s a game that will push you to your limit and make you break down if you don’t know what you’re getting yourself into. It feels more realistic in routines and schedules than something like Your Shape, but lacks in presentation with an unresponsive user interface and poor objective and calorie counters. If you can handle it, Nike+ Kinect Training will help you lose a couple of pounds and build muscle, but don’t expect to go in thinking it’ll be a cakewalk. It may not be a replacement for a gym, but it’s a good substitute when you don’t want to go out.