In all honesty, Epic Mickey: Power of Illusion will sell most of its copies simply because it has Mickey Mouse on the cover. As Wii U’s simultaneously released Epic Mickey: The Power of Two is clearly the premiere version, the 3DS title could have cheaply mocked its mechanics and likely seen the same amount of success as an original title. That being the case, it comes as a surprise that Power of Illusion is not only a great game, but one that could stand alone regardless of its big-eared protagonist and existence of the Wii U title. 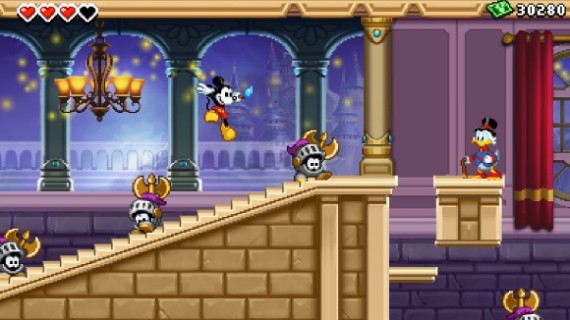 It must be noted that Epic Mickey: Power of Illusion is not really an Epic Mickey game; it’s secretly a spiritual sequel to 1990’s Genesis title Castle of Illusion Starring Mickey Mouse. While it does share some gameplay aspects with the Wii version that we’ll get to later, the majority of the game follows both the story and gameplay of the original Genesis title. Much like the original, the story of Power of Illusion is somewhat convoluted. For some inexplicable reason, the evil witch Mizrabel and her Castle of Illusion have been transported to an area called the “Wasteland”. Oswald the Lucky Rabbit finds about this and notifies Micky that Minnie and other Disney characters have been trapped inside the castle, so the mouse sets off to save them all. Mizrabel wants to return to the cartoon world by using the toon’s heart power, while Mickey wants to use the same power to return the toons themselves to their world.

While the story may be largely nonsensical, it serves as a brilliant way to incorporate famous Disney characters and locations into the same game while keeping the affair cohesive. As it’s a castle of illusions, instead of simply playing through various castle corridors like you might expect (à la Castlevania), most every area of the game is completely different from the last. Levels feature famous Disney locations like the Cave of Wonders, Agrabah, Neverland Jungle and the Jolly Roger. Throughout these levels, various Disney characters are hidden throughout that once found, initiate a short conversation and are sent to the “Fortress”, the central part of the castle where quests can be gathered from said characters and items bought from Scrooge McDuck. The quests are mainly an excuse to either talk amongst Disney icons, with some just involving going back and forth between two, and others an excuse to replay levels by finding items. It’s not a necessary component of the game, but still proves fun to talk with Disney characters out of their element (especially for Mouse House faithfuls) and a non-intrusive way to pay fan service.

While the Disney elements will be the main draw for casual players, gamers will relish in its retro-based puzzle-platforming gameplay. It’s a very familiar system, where hitting B makes Mickey jump and hitting it again makes him bop (kill) an enemy by landing on top of them. A high bounce is possible by holding the button during an attack and a “perfect bounce” is executed by waiting until the last second to bounce off an enemy. Y makes Mickey turn into a Tornado and take down enemies without jumping on top of them, perfect for tight spaces, while A lets Mickey use his paintbrush — the most notable addition to the title.

Besides flicking paint at baddies, the paintbrush comes into play often while traversing through levels. The touch screen displays an outline of the level on the top screen, with various silhouettes encountered throughout that serve a variety of purposes. If one is tapped, the shape fills the bottom of the top screen and must be traced to reveal the object. Objects may be components necessary to complete levels, like platforms and blocks, while others are optional elements (like a platoon of Peter Pan’s Lost Boys) to assist in clearing enemies. Conversely, some objects will be blocking the way that must be erased with primer. It’s a very unique gameplay element that not only ties it in with the Wii titles, but also enriches the already-impressive classic elements while constantly utilizing the touch screen.

Disney could have simply released a rushed tie-in to the Wii U game, but instead used this as an opportunity to develop a backdoor follow-up to one of the best platformers of the Genesis era. The entire game features enjoyable gameplay and clever level design that will inspire nostalgia in older gamers and expose younger ones to the wonders of 2D platforming. Epic Mickey: Power of Illusion must not be overlooked; it may be marketed towards today’s youth, but it’s adult gamers who grew up in the ‘90s that will truly appreciate it.