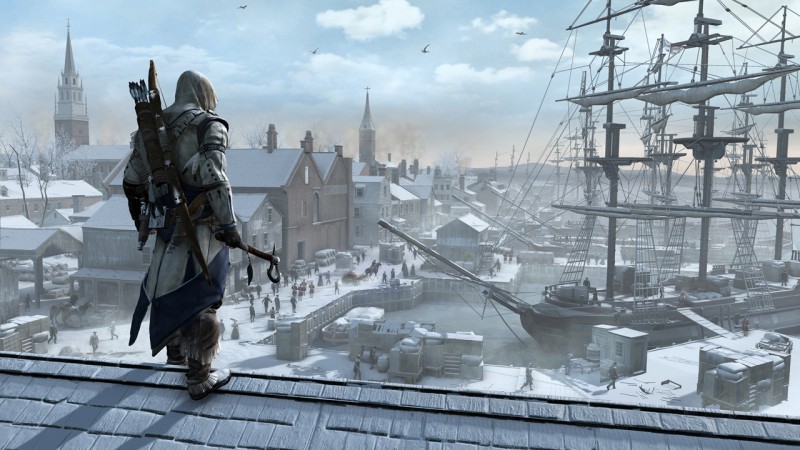 Note: Portions of this review appeared in our Xbox 360 review of Assassin’s Creed III.

Assassin’s Creed III is one of those rare games conceived to be revolutionary from the beginning. In development since the second title launched in 2009, Ubisoft had enough confidence in it to release the next two entries in the series numberless. A sales-impacting decision that would soon render them side-adventures, Assassin’s Creed III needed to be more than just a simple follow-up to affirm its status. With the fevered anticipation that the company had itself created, anything short of perfection would render the game a disappointment. Lucky for them, every decision leading up to its release is instantly validated from moment the adventure began on the PS3 and Xbox. Now, just three weeks later, the sprawling epic makes its way to the Wii U to test the console’s capabilities.

The story of Assassin’s Creed III is a sprawling one that begins with Desmond Miles’ relative Haytham Kenway in the mid-18th century. Haytham sails from Britain to Boston in hopes of finding a First Civilization storehouse. Along the way, he fights colony oppression by rescuing important figures and freeing slaves. One of the slaves he frees is a strong willed female Mohawk named Kaniethí:io. Daughter of a clan mother and groomed for leadership, Kaniethí:io attempts to single-handedly prevent incursions on her people’s land. Impressed by her tenacity, Haytham falls in love with her and they birth a child. After a startling revelation, the game shifts to said child, who is being raised as a tribesman without intervention from Haytham. Named Ratonhnhaké:ton, the child lives a peaceful life in his village until one day a general named Charles Lee burns it down. Enraged, Ratonhnhaké:ton devotes his life to seeking revenge. After a prophetic vision quest that summons the appearance of First Civilization representative Juno, the plot moves forward nine years where an older Ratonhnhaké:ton, now known as Connor, embarks to Boston in search of answers.

One of the most unique aspects of Assassin’s Creed is the multi-layering of the story, implemented here like never before. While the historical setting and plot are already detailed enough to sustain multiple games, the story is taken even further with the inclusion of numerous current-day excursions. While the Animus (the device responsible for experiencing past memories) can be exited at any time to read e-mails or talk to the team, the game breaks away between Sequences to further expand on the story of the impending-apocalypse. A highlight of these events is the team going to New York in search of a power source, where Desmond has to crawl in and around a skyscraper under development, leading to traversing beams and grasping onto scaffolding on the side of the building. Eventually, the mission culminates with Desmond climbing up a construction crane on the top of the skyscraper and parachuting to a building across the way. It’s a testament to the strength of the game that such a perfectly-executed (and rendered) sequence isn’t treated as anything more than a simple side mission.

While the sheer amount of dialogue and plotting is impressive enough, the way it’s written makes it all the more impactful. As proven in Assassin’s Creed III: Liberation, it’s difficult to keep a story that jumps around multiple decades and characters comprehendible, but here it remains easy to follow and often quite poignant and thought-provoking. There’s some great dialogue and characterization throughout that is sure to prove memorable in the years to come. An early highlight happens when Haytham is about to leave a bar, only to have drunk soldiers insult him. After asking him what he’s going to do about it, he simply replies “I was leaving, but now I’m going to feed you your teeth”. Another moment that sticks out is the when Connor boards his first ship, where instead of congratulating him, first mate Robert Faulkner exclaims ““Never the left foot! Horrible luck, step with your right foot first”. While it may not seem notable out of context, it’s one of many instances where clever quips make the dialogue ring true.

The developers took the story a step further by including authentic historical figures and locations throughout the enormous world. The towns, especially Boston, look incredible with countless encounters of real structures and areas from the time. Passing (or climbing on) Copp’s Hill Battery, for instance, lets players view a bio that includes true facts and interesting trivia. While it won’t replace American History classes (teachers everywhere breathed a sigh of relief), those who read all the bios will walk away more knowledgable about the 18th century. Historic figures like George Washington, Samuel Adams and Benjamin Franklin also make an appearance, a few being key elements in missions. While some have worried that including our founding fathers in a fictional video game would be disrespectful, making these legendary figures seem more human and relatable ends up being inspiring.

New to the series is hunting, where animals can be stalked, killed and skinned in wilderness areas. Hunting generally takes place with a bow, as using a gun not only startles prey, but also spoils the meat. Those who prefer to hunt melee, however, can sneak up on animals or even lay in wait in a tree and preform an air assassination when something comes close. There are tools to utilizes such as snares and feed that help attract a larger amount of prey. Snares can be set anywhere and are very helpful as small animals will be killed and trapped inside with no intervention. Clues can be found while hunting that mark whatever left them on the map, allowing for skittish animals like deer to be easier to track drown. Not content to let any part of the animal go to waste like true Native Americans, everything from the pelt to the marrow is collected after skinning and can be sold at a general store for a respectable sum of money.

In a game where it seems like every feature introduced is sure to be the highlight, Assassin’s Creed III is at its most majestic during its nautical moments. Players take command of large ships, controlling both the weapons and steering. To steer, the analog stick is tilted to control movement while tapping A controls speed, bringing the ship to either half or full sail. The ship can be halted by tapping A and must be pressed repeatedly to come to a stop at a pier. Naval warfare is the highlight of sailing, where enemy ships appear from nowhere to engage in battle. Ships blast away at each other with on-board weapons, with the right trigger firing cannons and the left spraying enemies with swivel guns. The ship must be lined up within distance of the enemy vessel to hit it successfully, causing the need to steer ships around in circles — a very realistic element to the combat. Graphically, everything about it looks gorgeous, with crashing waves and stunning animations of ships sinking after sustaining too much damage. Taking to the open seas is blast throughout the game, with enough depth to stand as its own release.

As the world can be overwhelming at times, minigames have been included to offer a welcome respite from the action. A highlight of these is Nine Men’s Morris. Playable at most taverns, two players alternate placing nine tokens in spaces across a wooden game board. Players are tasked with forming straight rows of three tokens, also called mills, resulting in the removal of an opponent’s piece. Savvy players will also try to box in players instead of attempting to form mills of their own. The ultimate goal of the game is to exhaust your opponent of possible movies or leave them with just three tokens. While the game may seem simple, it’s full of strategy and must be played carefully to win. As money is bet on the outcome, it proves to be very addictive distraction that can pass an hour without noticing.

“Assassin’s Creed” and “Nintendo” certainly aren’t synonymous with each other, so the game being released on the Wii U came as a surprise. As the Wii couldn’t come close to supporting such an enormous and graphically intense game, this is something of a bench test for what the new hardware can handle. Surprisingly, the game looks virtually the same as the 360 and PS3 versions, offering an incredible frame rate and a very smooth and crisp picture through even the most chaotic moments. Playing the game is a great way to prove to non-Nintendo converts the power of the system (whether it can measure up to the next generation is another story), but that may be the only reason to check out the game for those who already have it. The experience is largely the same, with the most notable addition being the map being displayed on the GamePad touchscreen. Seeing the huge maps of the world blown up within a few inches of your face are certainly a help for a game where tiny blips can sometimes overwhelm — especially for those sitting far back from their TV — but it’s the same exact map with no touchscreen functionality. Besides that, cutscenes are displayed on the screen simultaneously and a horse icon can be pressed to call your steed.

Considering the game came out just a few weeks ago originally and this is a secondary console, the lack of additions is understanding, but there are some clear changes that could have been made. One that jumps out instantly is lockpicking. This feature could have been a great way to include some touchscreen functionality in the form of a mini-game, but it instead simply uses the left analog stick the same as the other console versions. Still, the additions that are here do add to the experience — one that is practically the same as any other version — so the Wii U release is a fine choice for those who haven’t played the game itching to get whatever time in they can on the latest console.

Assassin’s Creed III is a beautiful, sprawling adventure that proves to be one of the most, if not the most, ambitious titles ever created. Just when you think you have it figured out, an entirely new element is introduced that enriches it further, rendering it one of the least repetitive experiences to be had with a controller. The Wii U version of the title is practically the same as the other console versions, but unlike Wii U ports that originally came out months ago, it’s possible that prospective buyers have still not purchased it. If that’s the case, the Wii U version is as fine option as any, but those who have the game have absolutely no reason to buy it again. Still, forgetting its a port, Assassin’s Creed III is the best game in the Wii U launch line-up and should be a must-buy for those yet to experience its incredible adventure.