When Trine originally hit the PC in 2009, it instantly became something special among the community. It was a vibrant and well designed action platformer that involved three lovable characters, each who had different motives for why they were on their quest. By reinventing the world through alluring visuals, adding cooperative play, and now making full use of the Wii U’s GamePad touch screen capabilities, Frozenbyte is releasing the best eShop game to date.

There are three main characters that are available at all times, each one possessing their own unique set of skills. Zoya is a thief who can grapple and shoot arrows, Pontius is a large knight who can wield a shield and sword, and Amadeus is a wizard who can conjure up magic and create items. They’re a strange bunch but they complement each other perfectly, especially when you get into the online side of things. The game is set on a two-dimensional plane where you must move from left to right, solve progression blocking puzzles and defeat evil creatures that lurch around. The puzzles themselves are entertaining and are well paced as it starts off easy and slowly escalate to more challenging, ensuring everyone will become stuck at one point or another. With that said, though, a number of puzzles almost feel as if they’re built strictly for cooperative play. Thankfully, what this allows is for the player to think more strategically when playing solo; even cheating the system at times. 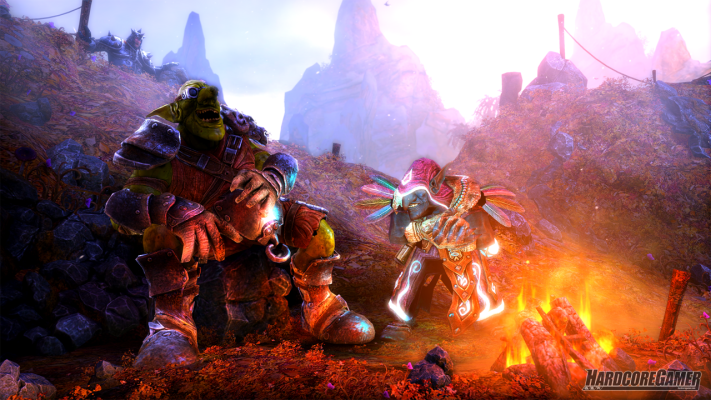 The story itself isn’t necessarily the most important part of the game, only serving as a reason to move forward. Taking place a couple years after the events of the first game, the trio have returned and once again requested to save a kingdom, this time from a horde of conquering goblins. By doing this, players will go through many trials in order to get to their ultimate goal, facing off against many mysterious creatures along their way. Trine 2: Director’s Cut is massive, spanning twenty levels if you count the Wii U exclusive mission, Dwarven Caverns. It’s the complete set PC users may already have, featuring the downloadable pack ‘Goblin Menace’ – not that there weren’t enough to begin with. It is a massive game that more than justifies its twenty dollar price tag.

Being so used to mouse and keyboard controls, the Wii U’s control scheme is a handy addition. What the Wii U’s GamePad does is enhances the overall experience with Trine 2. Instead of awkwardly drawing with the analog stick or mouse, gamers can now simply touch and tap the screen to perform actions such as creating items or shooting a well placed arrow. This comes in handy when solving puzzles and traversing the world, creating a magical experience that isn’t felt in any other version. Unfortunately, while it’s an enjoyable and thoughtful feature, it isn’t all that practical when in the midst of combat. Because the three protagonists can die in a couple of hits, it makes the frantic fights with more than one enemy difficult to pull off. It’s definitely suitable for puzzle solving and even swapping between the different characters, but when it comes to battle, it’s best to try and avoid using the tablet.

Whether it’s the original or the Director’s Cut, Trine 2 is absolutely gorgeous. It’s filled with a variety of locations that will bring color and liveliness to your living room. While goblins will have a bit of repetitiveness in their green hides, it’s the beautiful locals and vistas that will drop your jaw to the floor. It certainly helps that most of the inhabitants of the world also have a certain beauty to them as giant frogs and armored dragons have never looked this good. If there’s one game at the Wii U’s launch that will stun you artistically, this is it. 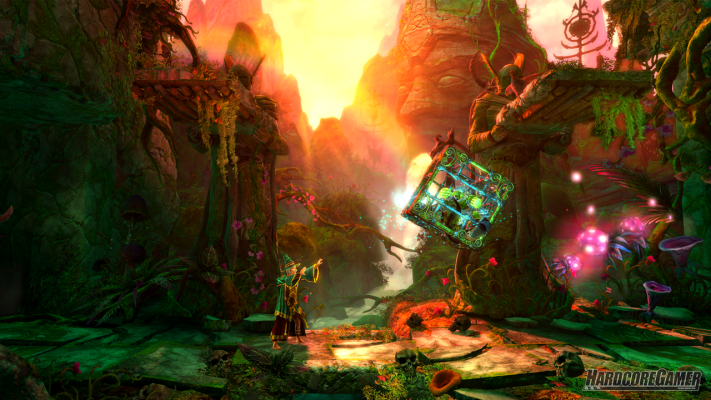 This is arguably the definitive version of Trine 2, offering more content and the ability to draw and aim with a touchscreen. While some of those controls can be a bit finicky when in the heat of battle, it does offer a fun and interactive way to play this brilliantly crafted game. Trine 2: Director’s Cut does the Wii U’s eShop a favor in creating a platformer that’s both luscious and well designed and could easily go as a standalone product in some capacity. Even if you own the original, this is definitely worth checking out to see the enhancements.