Wanted Assassin’s Creed III but didn’t want to dive in without playing previous titles? You’re in luck as Ubisoft has announced the “Assassin’s Creed Anthlogy”, which includes all five games and their respective DLC on three jam-packed discs. To make the package enticing for fans who already own the games, it all comes in a fancy box with five exclusive lithographs and a Steelbook inside. With over a 100 hours of gameplay, it makes the perfect Christmas gift for anyone who you never want to leave their house again.

Unfortunately, the set is only getting a release in the UK, New Zealand and Australia and costs a whopping £119.99 (near $200 U.S.), which is a lot considering many of the games can be had for cheap now.

Still, it’s a pretty tempting set for devoted fans of the series. Check out a trailer and large image below: 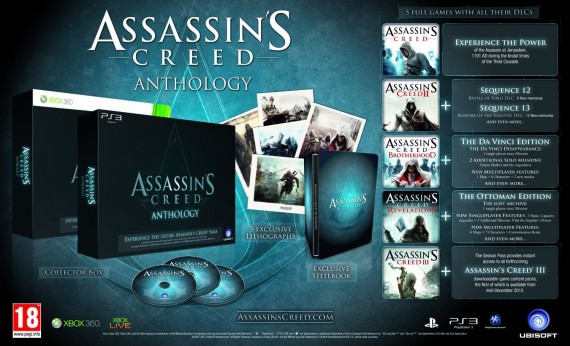